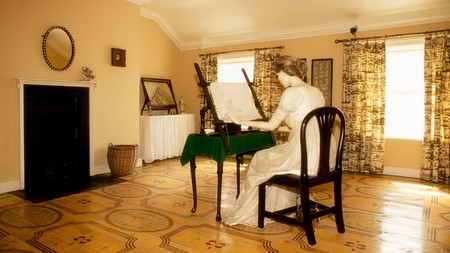 Dublin’s Georgian House Museum at Number Twenty Nine, Fitzwilliam Street Lower, is a genuine Georgian townhouse once lived in by an upper-middle-class family. Visit to take a trip back in time.

The museum interior appears how it would have looked between 1790 and 1820, towards the end of the Georgian period in Dublin. A historical attraction, it is run by Ireland’s Electricity Supply Board (ESB) and the National Museum of Ireland.

Georgian architecture was constructed in Dublin between 1714, during King George I’s reign, through to King George IV’s death in 1830. Georgian homes were built for members of the upper-middle class, with development on the south side of the city – where the Georgian House Museum resides – only beginning after the Earl of Kildare had finished his palatial townhouse in the area in 1748. Number Twenty Nine, Fitzwilliam Street Lower, received its first residents in 1794. Mrs Olivia Beatty – the widow of a well-known wine merchant – and her seven children moved in during November of that year and lived there until 1806.

In 1928, Ireland’s ESB took ownership of the building, which housed the company’s offices until 1980. Afterwards, Number Twenty Nine underwent an extensive restoration, a project overseen by ESB, in partnership with the National Museum of Ireland. The house was returned to how it would have looked between 1790 and 1820, mostly using furniture and other pieces from the National Museum’s collection of Georgian items. The museum was opened to the public in 1991.

Each room in the house has been returned to its Georgian glory, with decor accurately reflecting the dominant trends of the time – such as the introduction of the neo-Grecian and neo-gothic styles infiltrating from wider Europe. Luxurious home design was a huge market in Dublin between the late 18th and early 19th century, and most of the furnishings are Irish. Examples of high-quality Irish furniture from the period include a longcase clock made by Thomas Sanderson. The children’s quarters in the attic house two well-preserved 19th-century doll’s houses. The artwork on display is equally authentic to the house’s time, with paintings by Irish painter Nathaniel Hone and a portrait of the revolutionary leader Robert Emmet by Scottish painter James Petrie.

Tours of Number Twenty Nine are primarily self-guided and extend from the building’s basement through to the attic, with storyboards providing information on each room and the operation of the house as a whole. However, the museum is temporarily closed due to EBS building a new office complex, but you can take a virtual tour here.