The Most Beautiful Churches in Ayia Napa & Protaras 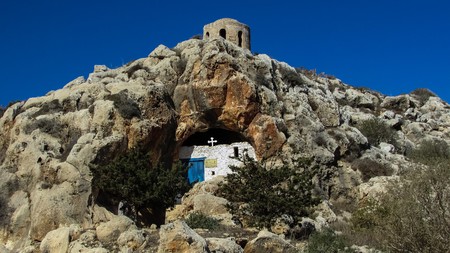 Ayia Napa and Protaras are highly popular among tourists and locals alike. Famous for their sandy beaches and rich cuisine, they have all the ingredients for the perfect summer holiday or long weekend. But the region is about more than sun and beaches: Ayia Napa and Protaras are rich in history and home to picturesque churches and chapels, dotted along the seafront with stunning views.

Somewhere between Ayia Napa and Sotira village lies the charming church of Ayia Thekla, built in an open space with no neighbouring distractions. Its traditional Greek style – white and blue colours – as well as its seaside location make it a prime spot for photography lovers and newlyweds, with numerous weddings taking place there. For breathtaking views, head there for dusk, as the sun dips into the Mediterranean Sea. Take the steps a bit further down to find the Ayia Thekla Cave Church formed in the rocks, known as the catacomb of Ayia Thekla. Legend has it that early Christians transformed the cave into a place of worship before the new church was built. 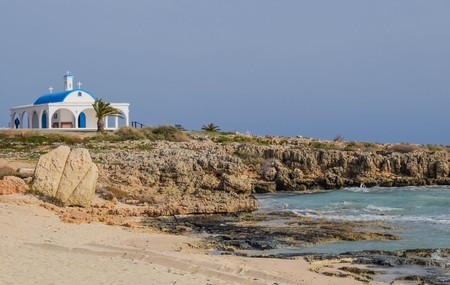 Of similar style and architecture is the chapel of Ayioi Anargyroi, which forms part of the Cape Greko area in Cyprus. Situated in a remote corner, it offers fantastic views of the sea on either side. This chapel is known not only for its beautiful and tranquil environment, but also because if you follow the steps down the rocks, you’ll reach a cave from where you can enter the cool waters. Alternatively, many jump from the rocky cliff just in front of the chapel – in fact, a lot of boat tours stop here so people can take a dive. The waters are clear and deep so it is relatively safe, yet it’s always a good idea to exercise caution when jumping.

Being a stunning spot that blends the Mediterranean blue with the rocky landscape of Cape Greko, the chapel is a popular place for weddings. If you get thirsty during your visit, there’s usually trucks selling juices, iced coffee and ice cream as this is a very popular spot – don’t let its popularity put you off though, as it’s generally quiet. 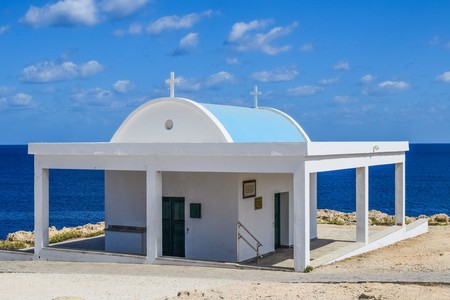 One of the quirkiest churches you’ll find in the area is certainly that of Ayioi Saranta, as it’s hidden in a cave in a remote area of Protaras. Its name means ‘forty saints’ in Greek – it is considered to come from the forty stalagmites on the ceiling of the cave, and is linked to the forty martyrs of Sebaste. It’s tucked away, so spotting it might be tricky: if you’re coming from Protaras, take the turning just before Grecian Park Hotel onto a dirt road and look out for the dome that sits atop the cave church. A short pathway leads up to the cave – inside you’ll find a small holy space painted white, with a few icons and seats made out of stone where you can take in the serene environment. Religious or not, it’s a unique sight to experience for its unique structure and location that have seen it listed as one of the quirkiest and most mysterious churches in the world. 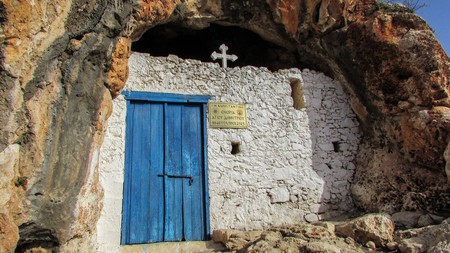 Walk up the pathway and push open the wooden,blue door to reveal this one-of-a-kind cave church | © Dimitris Vetsikas / Pixabay

On the other end of Protaras, towards Paralimni, is the Ayios Nikolaos chapel on a small fishing harbour. Right in front of Golden Coast Beach Hotel, it gathers many visitors who come to admire its simple beauty or to relax to the sound of the waves, whether they follow the Greek Orthodox religion or not. Similar to the two chapels above, it also maintains the white and blue colours and invites couples to hold their wedding ceremonies and christenings there. A trip to the well-preserved Ayios Nikolaos can be combined with a dip at the nearby Louma beach and with some local food from one of the restaurants close by. 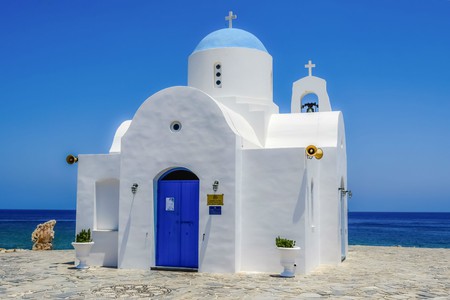 The best-known church in Protaras is probably Profitis Ilias, celebrated for its unique location on top of a hill that overlooks the whole town. Just behind the centre of this busy resort town, the church can be accessed only via 300 steps, but its views of the seaside and the town are not to be missed. For more striking views, head in the evening when Protaras is lit up. Profitis Ilias itself is beautifully illuminted, which makes it very easy to spot from town.

Here you can admire the Byzantine architecture of Greek churches as well as icons and biblical paintings in its interior. Interestingly, Profitis Ilias was built in 1984 using material and stones from the area to honour the local region. Surrounding the church are big trees, and you might wonder why they have ribbons on their branches – it is customary for people to tie a ribbon on these trees in memory of a loved one, thus adding colour to the scenery. 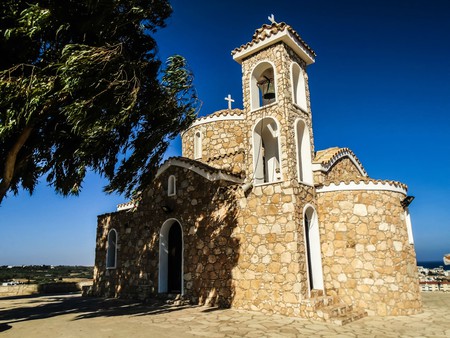 As well as the buzzing scene that Ayia Napa is known for, the town is also home to rich history and cultural gems. One of its landmarks is the acclaimed Ayia Napa Monastery, found in the centre of town. Built in the form of a medieval castle around 1500 AD, half of it is built underground and is surrounded by a high wall. It is dedicated to ‘Our Lady of the Forests’, since the word ‘napa’ means forest in Ancient Greek. According to local tradition, the miraculous icon of the Virgin Mary was found by a hunter in a cave there, and in the 14th century, the remaining half of the cave was built into a church, which can still be visited today.

The monastery managed to survive the Ottoman rule as a convent and a monastery, but was abandoned in 1758. Being one of the oldest on the island, the monastery was restored in 1950, and in 1978 became an Ecumenical Conference Centre, serving churches in Cyprus and the Middle East. If you enter through the south gate you’ll certainly see the ancient sycamore tree that is believed to be over 600 years old. 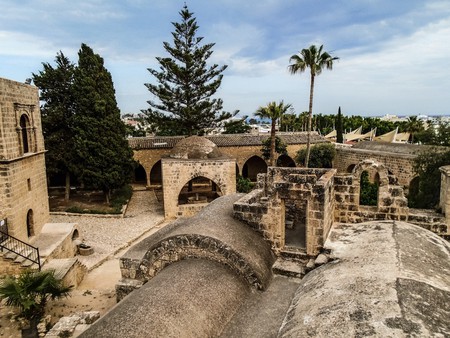 If you want to take in more cultural history, don’t miss this church as it’s located in an isolated space with unique views of Palaichori, a Byzantine settlement which was destroyed during the Arab invasion of 632 to 964 AD. It’s easy to find, as a large wooden cross on top of a large rock can be seen from the main road. Dedicated to Saint Salaminas Epiphanios, the site was formerly home to a chapel in his name, which eventually collapsed. In 1957, locals built the new church by the ruins of the former chapel near a cliff. The ruins can be seen through a glass floor in what is left of the old chapel. 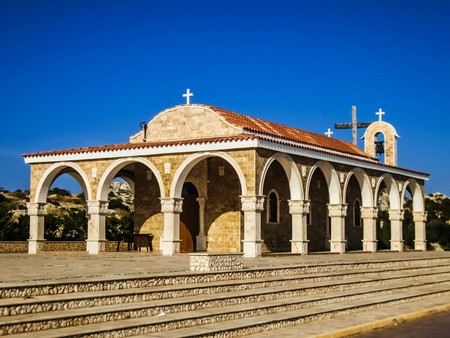 You’ll spot this church easily as it’s right in the centre of Ayia Napa, at the fishing harbour. It’s an example of a more modern take on Greek Orthodox churches as it’s well-polished with clean-cut columns and arches, though still sticks close to Orthodox ecclesiastic architecture. Wood-carved icons of saints fill the interior of the church, while the courtyard is decorated with palm trees. It’s small, but worth a stroll if you fancy a break from sunbathing and tasting the local wine. 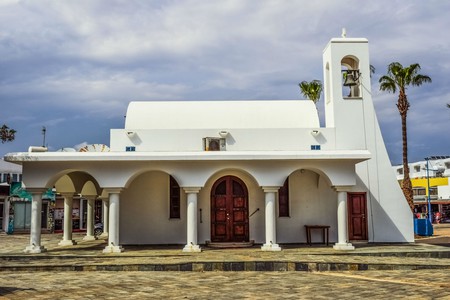