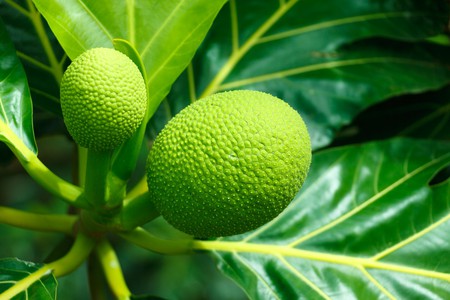 Caribbean cuisine is an exciting melting pot of global flavors influenced by the multicultural history of this diverse region. People from all over the world came and settled in the Caribbean, bringing their culinary heritage with them. The colors and flavours found in Caribbean foods must be some of the most vibrant and varied found anywhere. Set your taste buds ablaze with a selection of delicious Caribbean dishes you’ve probably never heard of.

Not the prettiest fruit in the world, or even the tastiest, this member of the gourd family is often described without any irony as an ‘acquired taste’, except the humble chocho doesn’t actually taste of very much at all. Once cooked, the flavour and texture is somewhere between an apple, potato and cucumber. It can be used in stir fry, salad or served as a side with fish or meat. Jamaicans like to serve it sliced with butter and black pepper. The great thing about this vitamin loaded wonder fruit is its versatility; it takes on the dominant flavour of whatever spice or herbs it is being cooked with. So if you can’t find apples for that apple pie, try using chocho instead.

Chayote squash beauties! I saw some beautiful fruit when I visited the WH Fruit Stand! But probably more importantly, some of THE nicest people. #winterhaven #haven_magazine #shoplocal #shopsmall #winterhavenfruitstand #chayote

Essentially a dense bread made with the addition of coconut-milk, butter and sugar, coco bread is starchy but with a sweet taste. Immensely popular across the Caribbean, coco bread will satisfy the hungriest diner. Popular in Jamaica as a sandwich with a patty filling, coco bread is tasty but demands a big appetite: not one for those on a low-carb diet!

Native to Central America, the Caribbean and northern South America, this prickly fruit’s flavour is something of a hybrid between strawberry and pineapple with a dash of citrus, and an underlying creamy flavor reminiscent of coconut or banana. Best enjoyed as a juice or in ice-cream, this unusual fruit is a popular and almost ubiquitous Caribbean flavour used to enhance all manner of foods and drinks. This spiky fruit gains its name from the slightly acidic flavour of the ripe fruit.

Breadfruit is an important staple food across much of the Caribbean. Used at all stages of maturity, at the green stage it can be boiled and used to replace starches such as sweet potato and yam. Once fully mature, the inside presents a creamy soft fruit that has a starchy texture akin to a potato. Traditionally the spiky skin is roasted off, resulting in the blackened breadfruit seen for sale by roadside vendors. Used much as a potato would be, breadfruit is good for soups and salads and tastes vaguely bread-like. It can be boiled, roasted or fried and goes well with jerk chicken.

A growing Breadfruit. Like the fig, this is not actually a fruit. The real fruit are tiny and seed-like, and can be found in the center of the "fruit". Breadfruit (originally from Asia IIRC) is a major food source in Barbados 🇧🇧. It is a member of the mulberry family. #barbados #breadfruit #plant #food #GodsCreation #naturephotography

Bammy or bami is a traditional Jamaican cassava flatbread descended from the simple flatbread eaten by the Arawaks, Jamaica’s original inhabitants. Fried and eaten hot, it’s a popular side accompaniment with anything from jerk to ackee and saltfish. Bammy is a particular breakfast favourite and is good for absorbing sauce and juices from other dishes like rundown.

A vegetable dish with roots in West Africa, callaloo was brought to the Caribbean by slaves and is still a staple of diets in Jamaica and Dominica plus Trinidad and Tobago. Leafy greens (often from the namesake bush or from taro, water spinach and more) are boiled into a thick stew, which may include peppers, coconut milk, okra and all manner of meats and seafood. Callaloo can also be purchased ready chopped by the bag in many Caribbean supermarkets. This leafy green also grows wild in many locations across the Caribbean, and locals can often be seen picking it at the roadside.

Pronounced in the Caribbean as ‘conc’ (/ˈkɒntʃ/ or sometimes /ˈkɒŋk/), the name refers to a number of large sea snails. Deliciously versatile, this meaty snail is good in soups, curries and fried as fritters. Particularly popular across the Caribbean, conch soup is sold by the cup at the mobile carts of many a street vendor. Less common is the long appendage usually removed from the conch prior to eating. Said to have aphrodisiac properties, this delicacy is not for the faint hearted.