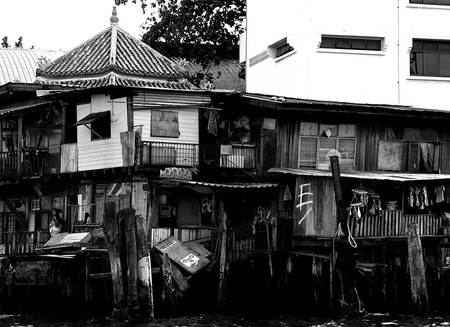 Khlong Toey is an apparently rare site in an ever-developing city such as Bangkok. It is one of the largest low-income communities in the capital, and it is a complete contradiction to the otherwise urban landscape of the city. Here is the story behind one of Bangkok’s biggest slums: Khlong Toey.

The city of Khlong Toey, if you will, sits on land owned by the Port Authority of Thailand. Many of the residents first relocated here in the 1950s, looking for work. Cheap labor was needed in the capital at the time. The city had established a sort of land rent system, in which people moving into the city to find work could settle on land at a very low cost. However, Bangkok grew exponentially in the 1970s, and this program essentially ceased to exist as landowners started to put condominiums or other new developments on their land instead of these people. They also neglected to collect rent, for the most part. The illegal squatter settlement continued to grow, and now it is one of the largest slums in the city. 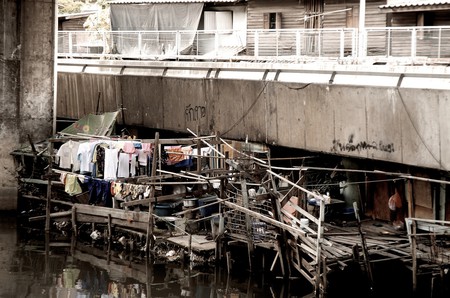 The community of over 100,000 that resides here is a unique body of people. Many still do not wn the homes in which they live, even having been there for decades. The slum is about 1.5 square kilometers in size, and the land is relatively low and swamp-like. Many of the tin-roofed homes are on stilts over stagnant, polluted water, and the area is especially prone to flooding during the monsoon season.

Khlong Toey is also home to the Khlong Toey Market, the largest wet market in the capital. It is located at a busy intersection on Rama IV Road, near the MRT station Khlong Toei. As one of Bangkok’s largest fresh food markets, it’s likely that many of the meals visitors devour in Bangkok include ingredients sourced from the Khlong Toey market.

The market is an attack on visitors’ senses: the smell of the fish freshly caught from the river fill the market. The market is seemingly endless, and could be explored for hours. From insects to frogs and more, there is something for everyone to see at this market. It’s open just about all day, every day, so venture here whenever you please. 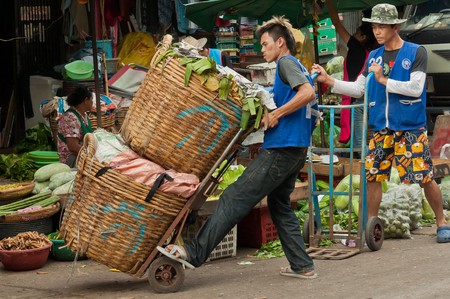 Khlong Toey is in need of much development to improve the lives of those who live there. Public spaces need to be improved, not just expanded. The walkways and roads are slim and uneven, making it hard for motorbikes and pedestrians to co-exist. The sewage system is in need of great improvements. Trash management is a large problem too, as the garbage seems to continue to pile up without being adequately dealt with. Education is another privilege that not many of Khlong Toey’s residents can take advantage of.

There are organizations working to better the lives of residents of Khlong Toey, including Mercy Centre, otherwise known as The Human Development Foundation. This organization began in 1972 when Father Joe Maier, a priest, ventured to the slums for the first time. He is the co-founder, and he and his team of over 700 members have been working to construct and repair homes in the area, as well as working with drug rehabilitation, documentation, financing, and much more. It’s possible to volunteer in Bangkok with the Mercy Centre.

Khlong Toey is located right off the MRT station Khlong Toei. The main slum area is about two kilometers east of the station.