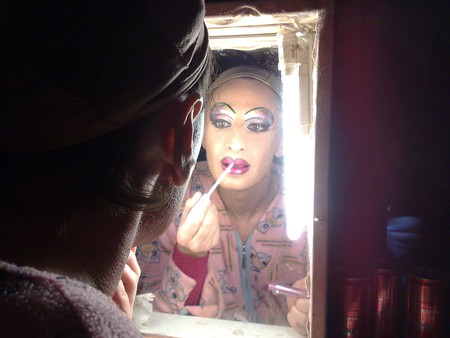 The recent launch of Drag Race Thailand, a recreation of RuPaul’s Drag Race, has energised the Thai drag culture. These incredible Thai drag queens seek to brand drag locally as a performance art in its own right, emphasising style and presentation, and redefining the art form separately from the moniker of showgirls and the local tradition of kathoey.

Born Pan Pan Narkprasert to Thai and Taiwanese parents, Paninga Heals is famous in the drag community for popularising “waacking” in Thailand, a hip-hop/punk-style dance that traces its origins to the LGBT clubs of Los Angeles in the 1970s. She gained fame performing at drag hotspot Maggie Choos, and her legacy grew in 2018 with her reign as co-host on Drag Race Thailand, the kingdom’s answer to the decade-long-running RuPaul’s Drag Race aired from America.

Having spent more than 30 years in the fashion industry, Art Arya is a legendary local fashion icon, stylist and designer. Her day job is as the creative director for Thai label THEATRE, and her passion is teaching fashion and design – a role she’ll now fulfil alongside Paninga Heals on Drag Race Thailand, as the contestants’ mentor and coach.

Jai Sira is a natural born entertainer at heart – first as a cheerleader and then cabaret showgirl, long before uncovering her true passion. She found her roots in drag when studying for her master’s degree in Australia, joining a drag queen competition in Sydney, replacing a last-minute dropout. Once returning to Thailand, she gained local fame for her Madonna character, and her philosophy of drag as an art form – she painstakingly plans and styles every aspect of her performances. Her unique and powerful style plays off the innate androgyny of drag, separating the genre from the likes of showgirls.

Born and raised in Bangkok, M joined the ranks of Thai drag elite when he founded The Stranger Bar in 2012. Voted the Best Gay Bar in Bangkok 2016 and 2017, with M Stranger Fox at its helm, the bar is famous for its incredible drag queen shows, often featuring Paninga Heals and M Stranger Fox himself. The philosophy of drag at The Stranger Bar is removed from the traditional Thai kathoey – transgender women – but focuses on the power of art and performance.

The heir to Katana Group – the Thai entertainment company responsible for launching Drag Race Thailand – Khun Tae has been committed to delivering mainstream content to the Thai LGBTQ community for years. Gaining his traction as a media mogul through re-creations like Gossip Girl Thailand and Ugly Betty Thailand, to the overnight sensation The Face Thailand, Khun Tae’s personal mission has always been to promote acceptance and equality not only for, but also within the Thai LGBTQ community. His launch of Drag Race Thailand intends to do just that, while recreating Thai impression of drag away from the taboo of drag queens as “funny queers”, and towards its understanding as an expression of lifestyle in art, style, and fashion.

Rising to fame at The Stranger Bar, Meantra Mananya Puengmai is a transgender woman whose personal style radiates through her impersonations of Nicki Minaj and Beyoncé. She got her start as a showgirl but was introduced to drag by Paninga Heals, and was instantly attracted to the freedom of expression she found in performing in drag. She aims to increase the visibility of drag as a performing art in its own right, and that it’s accessible to everyone – female or male. Today, she’s one of the contestants in Drag Race Thailand.

Rising to fame after winning the 2009 Miss Tiffany Universe pageant, (which he entered at the insistence of his parents,) Jazz made headlines across the nation again in 2013 when he became ordained as a Buddhist monk. In Thailand, only males can enter the monastery, and so Jazz removed his breast implants to take his vows. Many critics claimed that Jazz was only becoming a monk for selfish reasons, but the former beauty queen had studied Buddhism for years prior to his decision and insists his motives are purely virtuous.

While gaining national fame as a contestant on Drag Race Thailand, Natalia – born Autsadayut Kunwisetpong – is no newcomer to the drag queen circuit. He’s the most experienced competitor to the show, having performed in drag for more than 10 years. He got his start, as other queens, as a former cheerleader and athlete, before committing to a life of performance through fashion and style.

Another Drag Race Thailand contestant, Kittameth Seethan, stage name Bunny Be Fly, is a professional artist and painter and former cabaret actor. His artistic talent transfers seamlessly to his drag style, which evokes a cosplay-like vibe.

While not a single queen, the Iron Ladies are the 1996 Thailand National Champion Volleyball team, who rose to fame amid controversy at a time when the LGBTQ community’s fight for equality was just budding. Team members included drag queens, cabaret stars, and transsexuals, among others, and the story provided inspiration to the nascent drag community, whose philosophy promotes equality of expression and performance.