How to Navigate Transport in Chiang Mai, Thailand 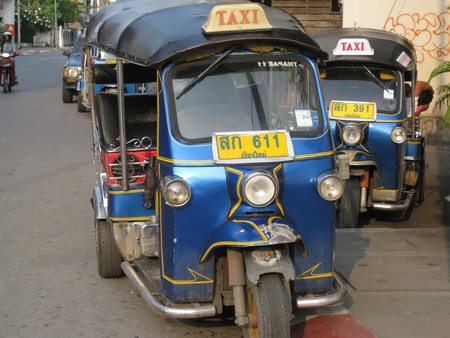 There are several ways to get around Chiang Mai, including songthaews, tuk tuks, and private rented vehicles. The northern city has an airport and a train station too. However, despite being a large and popular city, the public transport isn’t quite to the level you may expect. Here’s everything you need to know about transport in Chiang Mai.

Songthaews (converted pickup trucks with two benches in the back) are among the most common modes of transport for locals in Chiang Mai. The majority of songthaews are red, referred to in Thai at rot daeng (red vehicle); these operate in the city centre. While some follow set routes, it’s more typical for a songthaew to run like a shared taxi. Flag one down and, if it’s going in the direction that you want, ask the price and hop on. Simply buzz when you want to alight. You can also pay more to charter a whole vehicle. Songthaews that are parked alongside the road are more likely to try and get you to charter the whole vehicle, and thus pay more. For the cheapest prices, look for a vehicle already driving along the streets and wave to indicate that you want it to stop.

Local tip: Many major shopping centres operate free shuttle services by songthaew, transporting people from tourist areas and major hotels to the malls. If you wanted a mall trip anyway, they’re ideal. Be savvy too and see if your destination is close to a major mall. If so, use the free transport to get to the area. 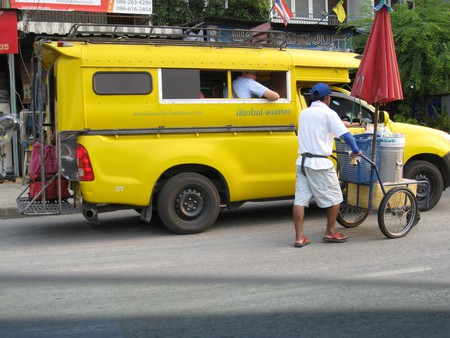 There are very few public bus and minivan services in Chiang Mai. Routes change, or get cancelled, frequently; ask locally during your visit about bus and van services. Chang Phuak Bus Station is at the heart of local bus and van transportation, though some local services also stop at Arcade Bus Station too. The services of most use to tourists are typically the shuttle services that connect the city and the airport. There are many stops along the way, including at Wat Buppharam, the Three Kings Monument, and Chiang Mai Technical College. There is also a minivan between Arcade Bus Station and Chiang Mai Zoo, with stops at Tha Pae Gate, Wat Phra Singh, and the Night Market, among others.

Local tip: Try and have coins and small notes ready to pay for buses and vans, as drivers often have limited change. 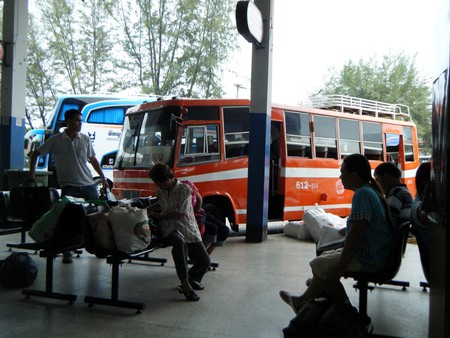 Tuk tuks are one of the most common means of transport in Chiang Mai; you’ll never have any problem finding a ride! You’ll find plenty of tuk tuks waiting around the Tha Pae Gate area and major tourist sites and they will often beep and slow down when driving past to see if you want a ride. Many times, the tuk tuk drivers will see you before you see them! They offer a private door-to-door service around the city.

Local tip: Always negotiate the price before starting your journey. It helps to have a rough idea of the cost beforehand too; ask in your guest house for an idea of normal prices. 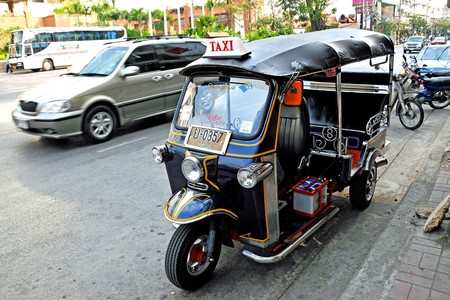 For solo travellers, motorbike taxis can be a great way to move around Chiang Mai. As with tuk tuks you should always agree on the price before taking a ride. They are a faster way to travel during rush hour and on congested roads. Groups of motorbike taxis usually congregate on strategic corners and close to major sites; you’ll recognise them from their colourful vests.

Local tip: If a motorbike taxi driver doesn’t offer a helmet, find another ride that does, no matter how short a journey you’ll be taking. Safety first! 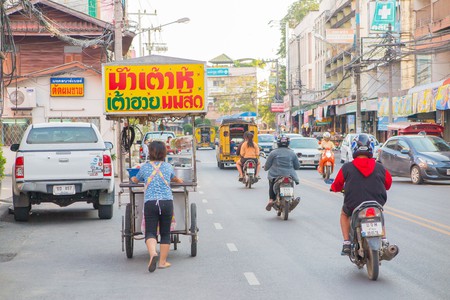 Chiang Mai doesn’t have the same number of taxis as other large cities in Thailand. They are not so easy to wave down (as they often already have passengers inside). If you see a taxi with a light in the window, it means it is vacant. The easiest way to secure a ride in a taxi is to call and book or head to a taxi rank at the train station, bus stations, and larger malls and hotels. Taxis are also available at the airport.

Local tip: You should always try and get a driver to use the meter. If a taxi driver refuses to turn the meter on, ask another driver. If you are met with several refusals, negotiate a rate for your trip. While drivers should use the meter, they often flat out refuse. 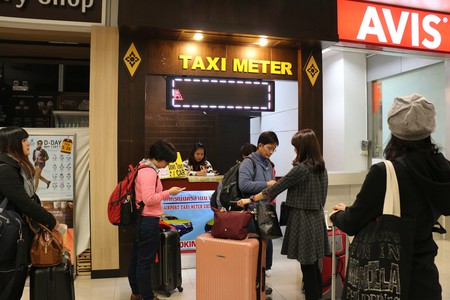 Scooters, larger motorbikes, and hire cars allow independent explorations of Chiang Mai. You can often negotiate a competitive price for a weekly (or monthly) booking as opposed to paying the daily rate each day if you plan on staying in the area for a longer period of time. You should have the relevant license and insurance to rent a vehicle. Always check the condition of any rental vehicle thoroughly before leaving, and point out any scratches or problems to the owner. It may also be wise to take photos of any pre-existing damages. Remember to drive on the left and fill up on fuel before heading into the countryside. Always wear a helmet when riding a scooter or motorbike. While cars offer greater comfort and safety, parking can be difficult to find in the Old City.

Local tip: Do not leave your passport as security when renting a vehicle. Some places may ask, but this is illegal (and leaves you more open to scams). Find a reputable hire company that plays by the book. 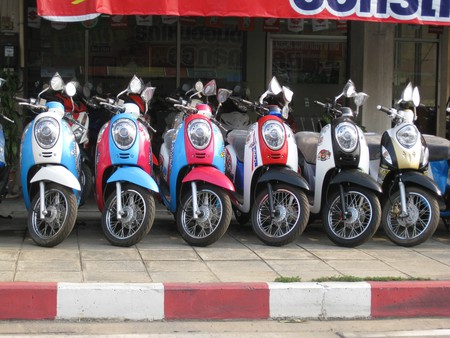 Cycling can be the ideal way to explore Chiang Mai’s Old City. There are plentiful places to rent a bike and it’s rarely difficult to find a suitable place to leave a bike outside major sites. Remember to drive on the left. Obtain a cycle helmet if possible. A cross-body bag, bumbag, or backpack is better than riding with a handbag in the basket—it only takes a second for somebody to snatch your valuables.

Local tip: While thefts of bicycles are rare, it’s better to be safe than sorry. Always lock the bike when leaving it unattended, and don’t leave anything of value in the basket. 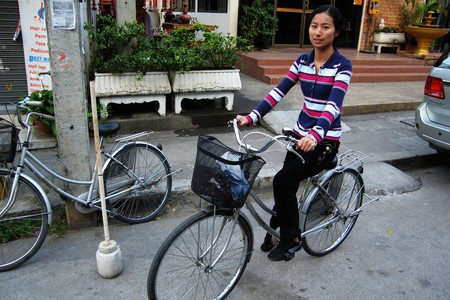 Songthaews operate between Chiang Mai and nearby areas. These inter-area songthaews are colour coded, making it easy to figure out which one to take. Yellow vehicles go north, towards Mae Rim, and green songthaews go to Mae Jo, in the northeast. Catch a blue songthaew for Lamphun and south of the city, and use the white trucks for Sankampaeng and places east of Chiang Mai.

Local tip: Government-operated buses are the cheapest bus services. The more expensive VIP buses do, however, generally offer higher standards of comfort. Night buses can be a great way to travel longer distances for a relatively low price. 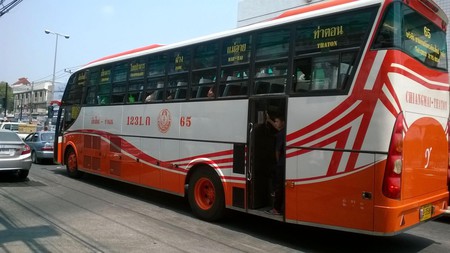 Chiang Mai Train Station is located two kilometres (1.2 miles) outside of the city centre, on the opposite side of the Ping River. Chiang Mai is the last stop on the Northern Line, with several trains per day to Bangkok via Lampang, Phitsanulok, Nakhon Sawan, and Ayutthaya. It is better to buy tickets at least a couple of days in advance of travel to avoid disappointment and secure a bunk or seat in the class that you want. There are rapid, express, and special express services, and classes include first, second, and third.

Local tip: The bottom bunk in sleeper carriages on night services may be a little more expensive than the top bunk, but it offers a lot more space. 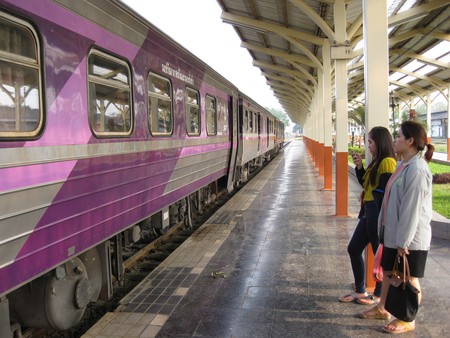 Chiang Mai Airport (CNX) has two inter-connected terminals within one building. One terminal serves international routes while the other is for domestic departures. The most popular domestic destinations from Chiang Mai are Bangkok and Phuket, though there are also direct flights to other Thai cities. Major carriers with domestic routes include Thai AirAsia, Nok Air, Thai Lion Air, Thai Smile, Bangkok Airways, and Thai Airways.

Local tip: Domestic flights can be inexpensive (especially if booked in advance) and hassle free, helping travellers to save time and make more of their vacation; it always pays to compare the prices of domestic flights against long-distance buses and trains. 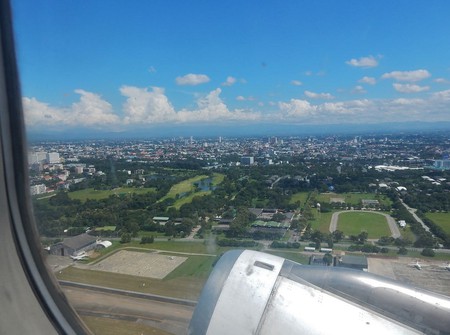 The ride-sharing services of Grab and Uber both operate in Chiang Mai, usually offering cheaper fares than regular taxis. Download the apps to make ordering a ride quick and convenient.

Local tip: Try and have addresses written in the Thai script to make it easier for taxis and other vehicles to find your destination with minimal fuss.