The Best Things to See and Do on Long Street in Cape Town, South Africa 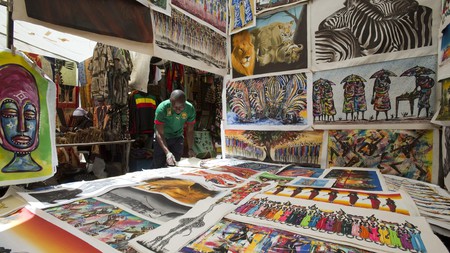 Cape Town’s Long Street is one of the best-known thoroughfares in the city. Once the longest street in the area, hence its self-explanatory name, it’s now famously home to dozens of bars and nightclubs, and several popular restaurants.

During the day, Long Street is busy and frequently chaotic, but it’s after dark when it truly comes to life. And much like other famous party streets around the world, it’s often a love it or hate it affair, but with the right approach, there are several fascinating things to see and do, regardless of the time of day.

If anyone knows how to find the best of Long Street, it’s Cape Town comedian Peter Sserwanga. He’s lived near it for several years now and makes a living, and a pastime, of exploring everything that the street and its surrounds have to offer.

When Peter isn’t pacing the stage of a local bar or comedy venue sharing his unique brand of humour, you’ll find him ordering a few pints at the bar, where he’ll happily share secrets of his favourite haunts in the Cape Town CBD.

Get sidetracked in Greenmarket Square

Greenmarket Square, although not directly on Long Street, is a great place to start an exploration of the area, says Peter. Located in a large town square a few metres from Long Street, between Burg Street and Longmarket Street, it’s one of the city’s most popular shopping destinations for tourists.

“You’ll find lots of trinkets and curios at the various market stands, and it’s an interesting place for anyone to check out, even if you’re not looking to buy,” says Peter. “Even though I live upstairs from the market, I quite often venture down into it to see what’s going on.”

Find some of the hidden markets

“What many people might not know is that there are several other ancillary markets located throughout the area,” says Peter.

Part of the fun is seeking these out, and they’re most noticeable on Long Street thanks to crowded shop windows piled high with various items. Oftentimes, these even spill out on to the street and stretch several storeys above the busy street below.

“The range of items is unlikely to differ all that much from what’s on offer in Greenmarket Square,” he says. “But the quieter, more obscure markets are often more authentic and raw.”

For a wide variety of goods spanning much of the African continent, the Pan African Market, at 76 Long Street, is a great place to explore.

For the musically inclined, Long Street is never short of options, but the majority of these take place after dark in crowded bars and nightclubs.

For a daytime, more rhythmical musical affair, though, Peter suggests visiting the area on a Saturday afternoon.

“There are popular drum circles that take place at Djembe 4 All,” he says. “That’s always a fascinating thing to do.”

The circles are run by master djembefola S Manan Ajimah and his company Djembe 4 All, at 134 Long Street. During the day, it’s a fully fledged djembe and music store, but at 3pm on a Saturday, it takes the music to the streets. For a small fee, tourists can learn the basics of how to play the popular African instrument during an afternoon session.

Take a ride on Long Street

On a sunny day, Peter recommends hopping on a bike to explore some of the city’s bicycle routes. Although not all parts of Cape Town are specifically bike-friendly, attitudes towards non-motorised transport are starting to shift.

“Taking a bicycle ride all the way down to the V&A Waterfront, and back up Long Street, is a great thing to do. You’ll get to see some new parts of the city, and it’s a particularly good activity to do before breakfast. There’s less traffic, and you can end off at one of the coffee shops nearby,” says Peter.

Visitors who don’t have bicycles can rent them right on Long Street at Rook Cycles, a small Cape Town bike shop that sells and rents eye-catching single-speed bicycles.

Take in some theatre or a rooftop movie

Cape Town has a rich history of theatre, and although many of these venues moved away from the heart of the city, some are starting to return.

“There are a few theatres now that have popped up on Long Street, or just off it,” says Peter. “44 on Long is a great one to visit. It often has art exhibitions and jazz nights, and it’s a particularly popular spot to visit on First Thursdays.”

For cinema fans, there’s also a rooftop movie theatre atop the famous Grand Daddy Hotel that runs on select nights throughout the year and is worth visiting. It’s called the Pink Flamingo, and the open-air cinema showcases famous movies from across the decades – with popcorn, snacks and alcohol available to purchase at the venue as well.

Take in a stand-up comedy show

As a stand-up comic, Peter would be remiss not to mention a few venues worth exploring for live performances.

“There are a few stand-up comedy nights that take place across Long Street, throughout the week and on different days. They all kick off between 8pm and 8.30pm, and they bounce around between venues,” he says.

Pushed to pick, Peter suggests Wednesday night comedy at the Beerhouse, and Saturdays at Tiger’s Milk – each on opposite ends of Long Street.

Dance the night away at the Waiting Room

When he wants to let loose and have a late night on the dance floor, Peter usually heads up to the top of Long Street, where the popular Waiting Room is located.

Previously a waiting room for the popular Royale Eatery burger joint downstairs, it has since morphed into one of the city’s longest-standing and most popular nightclubs.

“The music is always great, and if it gets a bit too much inside, the deck on the roof is the perfect place to chill out and enjoy some views of Cape Town,” says Peter.

Take a dip at the Long Street Baths

Although Peter isn’t exactly a regular at the Long Street Baths, they’re a popular attraction on many visitors’ calendars.

They’re located at the very top left corner of Long Street, and although they don’t look like much from the outside, inside is a 25m heated pool, sauna and steam room, as well as a 12m children’s pool. Entrance is cheap, and it’s a perfect venue to visit for a quick water-based workout during the day.