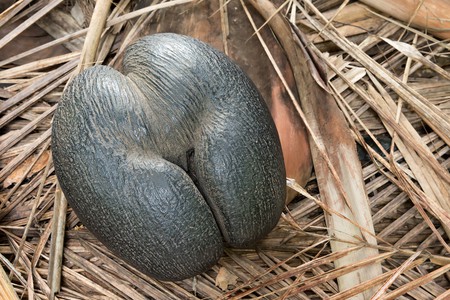 Give a task: cast a spell, or cause evil on someone.

Cobblers: sea fish usually caught in traps around the reefs, or on the banks where they come annually from October to December to lay their eggs.

Cacatois: fish with very thick scales whose flesh is much sought-after. They are sometimes called “sea parrots.”

Calou: a wine made from cutting and trimming coconut flowers. It is called “soft calou” when unfermented, “stinging calou” when it begins to ferment, and “strong calou” when it is quite potent. A well-prepared calou is an excellent drink that can make a man shine! Sometimes, a little soft honeycomb is added to the concoction to thicken it.

Breadfruit: a fruit that is harvested from the tree of the same name, shaped like a large ball, and which one eats as a vegetable. It can be fried, boiled, broiled, or prepared with coconut milk.

Convector: a kind of shed used to dry coconut shells. An oven maintains the necessary heat inside to slowly dry nuts placed on the shelves.

Kitchen garden: a small rustic table usually built next to the kitchen on which one disposes of their dishes, water jugs, and other kitchen utensils.

“He habitually picked six hundred coconuts to finish his task.” In the plantations, there are still workers wretchedly paid to pick up nuts.

Martin herbs: vegetables whose leaves are used a little like European spinach. “Martin” is the Seychellois name for the magpies that like to eat the seeds of this plant.

Cafoule: the hard outer shell which protects the coconut, used as fuel for convectors, smithies, and many other things.

Vacoua: a plant with long, broad leaves with which bags are made.

Moucate: a thick cake made from cassava flour.

Carangue: a voracious fish whose flesh is very popular. It usually moves in shoals, which allows it to be caught by the hundreds.

Encive: a large shell in which a hole is drilled to use it as a horn. Fishermen sound it when they’ve caught a lot of fish. The call rings throughout the canton, alerting people that there will be fish for the village.

Breakbowl: a kind of locust which has the habit of hopping around the table during meals. When long ago the Seychellois ate their meals in earthenware dishes, this insect could make them them drop the plate or the bowl they were holding, hence its name.

Banana-ox: a big insect that bizarrely resembles a rhinoceros, and whose wings emit a strange sound when it flies. It usually lives in rotten tree trunks. It is a sign of misfortune if it flies around someone at night.

Campêche: a thorny, small-leaved shrub, used as hedges around a house or a path.

Dadaques: baits tied together to be suspended within creels.

Cafoule de bacca: a coconut shell cut open and used as a cup, in which one serves drinks. Bacca is also an excellent beverage created from by the fermentation of sugarcane juice.

Catecate: banana boiled with a pinch of salt and finely crushed with the help of a spatula. Coconut milk is added to make it gelatinous. Cooking time is about ten minutes. It can also be prepared with fish.

Saint-Jacques banana: a much sought-after variety of banana; perhaps the islands’ best.

Baie Lazare: a large bay and canton in south-west Mahé. The famous French navigator Lazare Picault landed there in 1742.

Blooddragon: a tree that can grow to quite a large size, and whose red sap strangely resembles the blood of an animal.

Fataque: a plant whose stem Seychellois use to make brooms.

Manique: an aquatic bird with a long neck and grayish plumage, quite adept at hunting gudgeons in marshy ponds.

Veloutier: a shrub that grows along the coast.

Green room: a room built when celebrating family weddings. This is where the hosts receive their guests among flowers of straw-in-tail, bougainvillea, garlands, and palm leaves. This is also where speeches are spoken and romances sung in honor of the newlyweds during the wedding feast.

This excerpt is a translation of an excerpt from Coco sec, a novel by Antoine Abel © Editions Pierre Jean Oswald / l’Harmattan, 1977