Things to Do in La Candelaria, Bogotá 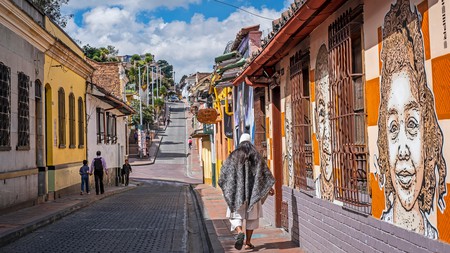 La Candelaria is home to some of the most popular museums and attractions in Bogotá. The neighborhood is an eclectic juxtaposition between old and new, historic and modern. The beautiful buildings are typical of Spanish colonial architecture, while the streets boast some of the most unique graffiti murals you’ll ever see.

You can enjoy a fascinating guided walking tour of La Candelaria with our local insider as part of Culture Trip’s epic eight-day Colombian Andes trip. 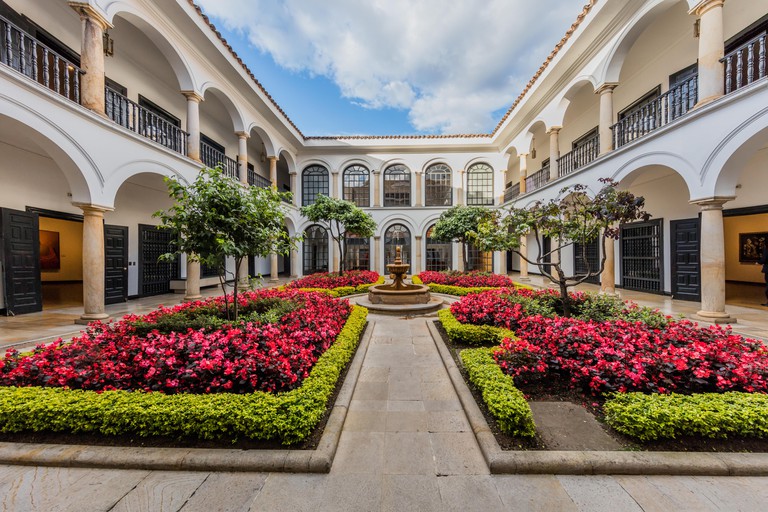 © COLOMBIA Landmarks and People by Vision / Alamy Stock Photo
The Botero Museum is one of Bogotá’s most famous art museums. It is a celebration of one of Colombia’s most accomplished artists, Fernando Botero. His work and style, called Boterismo, is unmistakable, as it usually depicts people and animals in exaggerated proportions and volumes. His work is displayed in museums around the world, but the collection in Bogotá is the largest. Other works from artists like Dalí, Degas and even Picasso can also be seen at the museum. 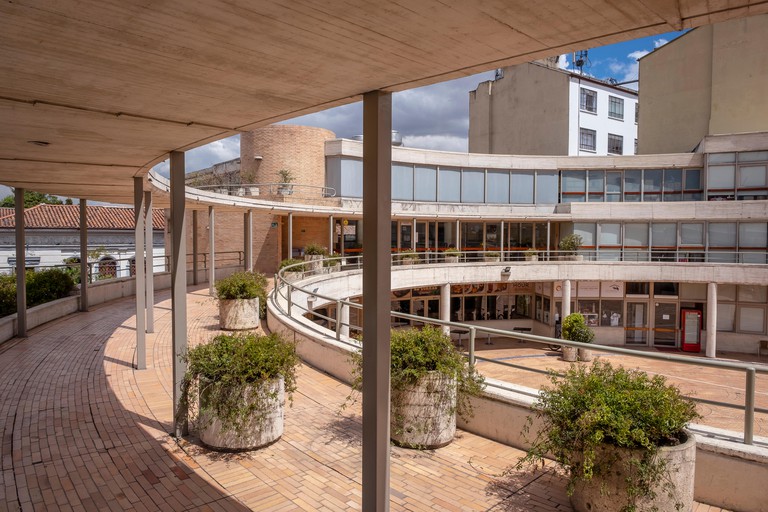 This cultural and historical arts center has been a national monument since 1963. Today it is a hub for students, tourists and scholars looking to escape the busy city and immerse themselves within a quiet, stimulating environment. The center has a gallery, café, cultural academy, library and hundreds of other resources for visitors to gain a deeper understanding of Colombian art, politics, culture and history. 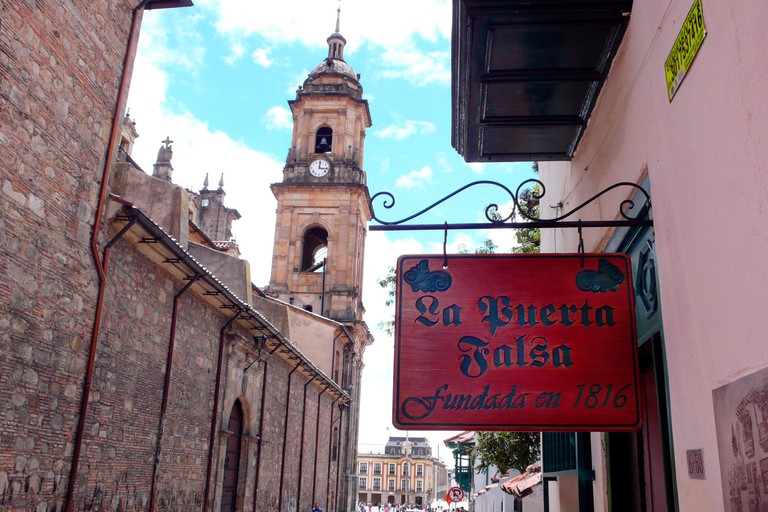 © Marc Boettcher / Alamy Stock Photo
La Puerta Falsa is a Bogotá institution and perhaps the oldest restaurant and snack bar in the city. It isn’t just a restaurant, it’s an experience for anyone looking for authentic and traditional Colombian fare. The restaurant has been open since 1816 and has remained a landmark since then. On one of his trips to Bogotá, famed travel writer, Anthony Bourdain called the tamales at La Puerta Falsa “a thing of beauty”. You can’t miss out on their hot chocolate or agua de panela. Even though they serve small plates, we suggest going with an empty stomach and trying a little bit of everything they have to offer.

Art Gallery
Facebook
Email
Twitter
Pinterest
Copy link
Share
Espacio Odeón is a contemporary art studio and gallery that opened its doors in 2011. Though fairly new when compared to the other sites and museums in La Candelaria, the gallery breathes fresh air into the antiquity that surrounds the neighborhood. Every year, they hold a contemporary art fair for three days and with every year it becomes more popular and more successful. They collaborate extensively with other galleries throughout Latin America and North America, shining as much light on as many artists as possible. 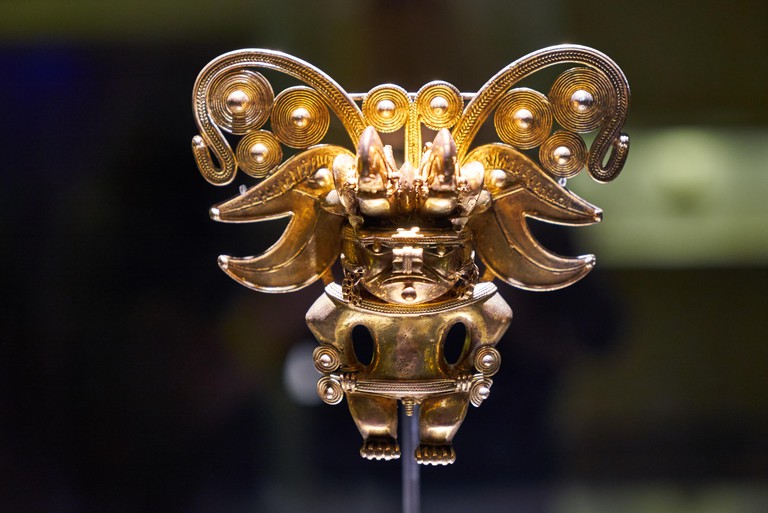 © Juergen Ritterbach / Alamy Stock Photo
The Gold Museum is one of Colombia’s most impressive museums. Within the steel-plated doors lies some of history’s most incredible pieces of sculpted gold, depicting the life and culture of pre-Hispanic societies. There are more than 55,000 pieces of gold within the museum. Some are simple pieces of jewelry and ornaments, while others are masterful works of some of Colombia’s oldest welders. It’s a site that you cannot miss when visiting Bogotá. Throughout the museum, descriptions and information are printed in English and Spanish with private tours available in other languages. On Sundays, entry to the museum is free. 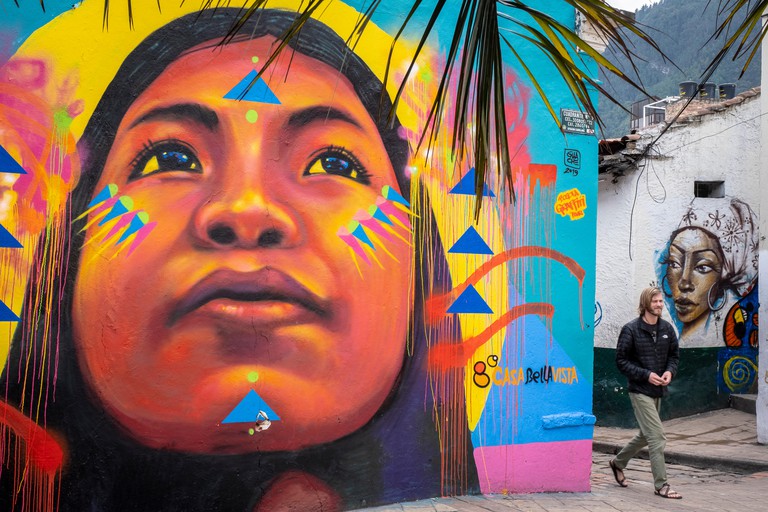 It’s hard to miss the colorful murals of street art that are a stark contrast to the colonial architecture in La Candelaria. The tour will take you to other neighborhoods in Bogotá, but the murals in La Candelaria, are some of the most impressive. Every mural is different, depicting themes that affect the urban environment and the people. The tour guides are very knowledgeable about the artists and the messages portrayed through the art. The tour is free, though a small donation to support the artists and guides is encouraged. If you’re looking for something a little different, this is a great experience. 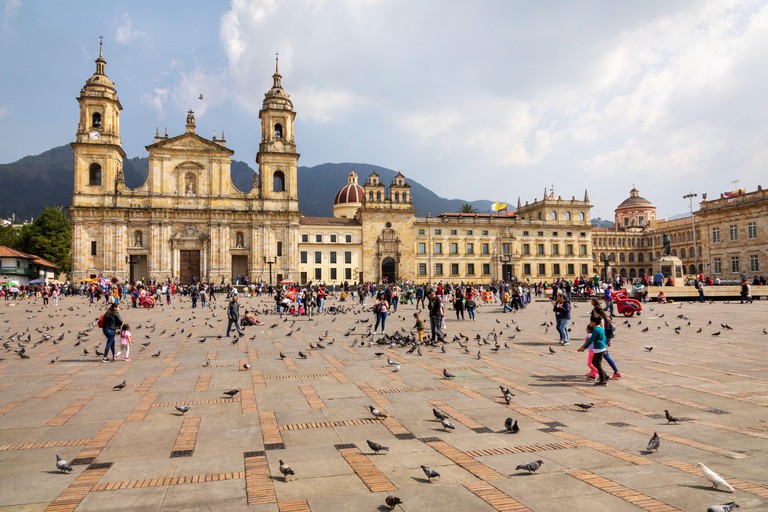 © Sonja Novak / Alamy Stock Photo
Plaza Bolívar is the main square in the heart of La Candelaria and at the center for some of the city’s most important buildings and offices. It is named after one of Colombia’s most important historical figures, Simón Bolívar. Bolívar’s importance in the independence of Colombia from Spanish rule is seen throughout the square, the city and indeed the whole country. Around the square, you’ll see the Palace of Justice, the National Capitol building, the Cathedral of Bogotá and the Museo del 20 de Julio (Independence Day). In December, lots of people fill the square to see the bright lights and Christmas trees that fill the area to celebrate the holidays. 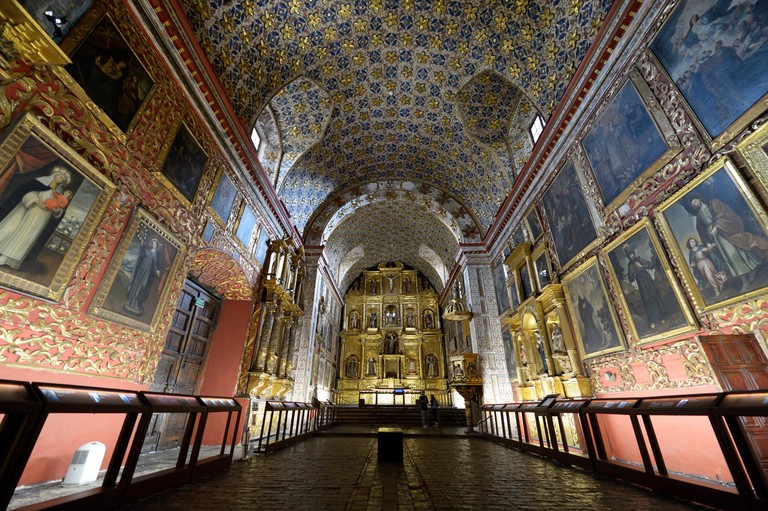 The Church Museum of Santa Clara is one of the oldest churches in Bogotá and is now a museum run by the government. The small entrance fee often deters visitors, but we definitely recommend seeing the elaborate interior of this church. It was built between 1629 and 1674 and its interior is almost entirely painted in gold. Though the church is quite small, it is an incredible sight, especially when compared to the other cathedrals in the city. Between the golden walls, there are over 147 paintings and sculptures of saints. You won’t see another cathedral like it in the city. 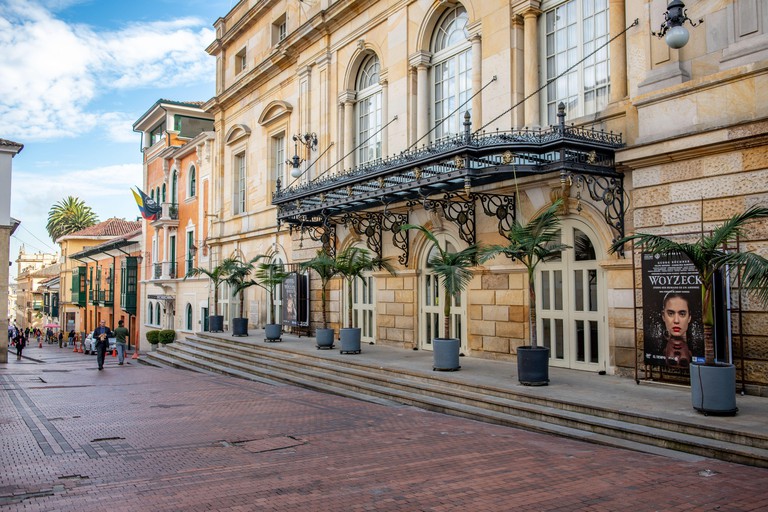 Teatro Colón is Colombia’s national theater and, as expected, is impeccably beautiful. It was built in the neoclassical style by an Italian architect and is reminiscent of the horseshoe shape of the Palais Garnier in Paris. Beautiful and intricate frescoes decorate the dome ceiling, while delicate golden and red details illuminate the stage and balconies. There are always musical and theatrical performances happening in this spectacular venue. Their website is updated frequently and lists all the upcoming shows and events. We recommend getting your tickets a few weeks in advance as they tend to sell out quickly.

If you’re a lover of literature, a writer, or a poet, you have to visit the La Casa de Poesía Silva. The non-profit foundation is located in the old home of José Asunción Silva. He is considered one of the founders of Spanish-American modernism and one of Colombia’s most celebrated names in literature. The house is a haven for anyone with a passion for the literary arts or a desire to explore poetry throughout history and in any genre. The house is structured like a museum. You’ll find original copies of some of his literary work, as well as paintings, furniture and personal belongings that belonged to Silva when he was alive.