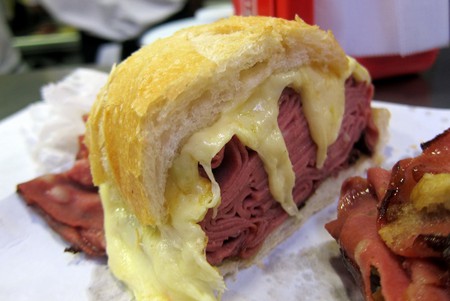 São Paulo has an incredibly rich culture when it comes to food. This city the size of a medium-sized country is made up of countless communities from different ethnic backgrounds who have introduced their own traditional foods. While all sorts of different world foods can be found here, it is in the city’s iconic and delicious sandwiches, the most democratic of foods, that you can best get a sense of the history of this marvelous metropolis.

The most famous of São Paulo’s sandwiches, and ever-present in city guidebooks, is the massive mortadella sandwich from the Mercado Municipal, or Mercadão as it is commonly known. While it is often referred to as a bologna sandwich, the meat is in fact a bit different, being prepared with more spices and seasonings, particularly black pepper.

The “snack” (finishing a whole one by yourself is quite the challenge) consists of slices of Ceratti mortadella (made only in São Paulo), melted cheese, tomato and lettuce, served on the Portuguese-style rolls which are ubiquitous in Brazil and bafflingly called pão francês, or French bread. While the ingredients aren’t particularly impressive on their own, the mortadella sandwich at the Mercadão is famous for its size. Approximately 10 oz of sandwich meat goes into each one, making it quite filling indeed.

The story goes that the mega-sandwich dates back to the 1930s, when the market’s stalls would sell regular – if a bit stingy – sandwiches for a price which the locals thought was unreasonable. One day, one particularly irate customer complained so much about the sandwich that the chef filled one roll with an obscene amount of mortadella, just to keep him quiet. Onlookers were impressed and asked for the same, eventually leading the sandwich to become a Mercadão specialty.

Cafe, Bar, Brazilian, South American, Beer, Wine, Cocktails, Pub Grub, Coffee, Tea
Facebook
Email
Twitter
Pinterest
Copy link
Share
Map View
While the mortadella sandwich at the Mercadão is definitely more famous outside of São Paulo, most Paulistanos will contest that the true emblem of the city’s sandwich culture is the pernil sandwich at the Estadão diner. Located in the old center, Estadão is busy 24 hours a day, seven days a week, with 90% of the clientele drooling over the rows of slow-roasted pork shoulder (pernil) on display at the counter.

Pernil sandwiches are a Brazilian classic, but no-one does them like Estadão, serving slices of moist pork with spoons of delicious roasted vegetables, on pão francês. You can have them as is, but they are also served with different types of melted cheese, which really makes the whole thing come together. Go for the pernil com provolone, add a little of the restaurant’s homemade chili sauce and let the succulent pork mingle with the sharp provolone cheese, preparing yourself for the most Paulistano sandwich imaginable.

Diner, Sandwich Shop, Brazilian, $$$
Facebook
Email
Twitter
Pinterest
Copy link
Share
Map View
During the 1920s and 30s, the Ponto Chic diner on Largo do Paissandu was one of the coolest spots in São Paulo, frequented by writers, intellectuals and artists during the boom of Brazilian modernism. From then on, Ponto Chic became synonymous with the Bauru sandwich, which was named after its creator, Casemiro Pinto Neto, who was from the city of Bauru in the interior of São Paulo state. The sandwich takes a pão francês and fills it with slices of rosbife (a Brazilian sandwich meat made from beef and encased in pork fat), topped with sliced tomatoes, pickled cucumbers and a gooey, delicious blend of four melted cheeses.

Grocery Store, Brazilian, $$$
Facebook
Email
Twitter
Pinterest
Copy link
Share
Map View
Hambúrguer do Seu Oswaldo is one of São Paulo’s best and most traditional burger joints. The charming diner serves no-frills burgers, with few variations on the menu and only accepting cash. The X-Bacon Salada is simply a bacon cheeseburger with lettuce and their signature fresh, homemade tomato sauce (using “X” as a prefix stand for cheese in Brazil) and is the most popular order at Seu Oswaldo, a São Paulo institution.

Snack Bar, Fast Food, $$$
Facebook
Email
Twitter
Pinterest
Copy link
Share
Map View
Since the mid-20th century, São Paulo has had a strong influence from Middle Eastern immigrants, particularly those from Lebanon and Syria. This Levantine presence also made a huge impact on the city’s food and drink culture, with several Middle Eastern dishes becoming mainstays of São Paulo’s menus, albeit with a Brazilian twist. One of these adaptations also happens to be one of the city’s most iconic sandwiches, the Beirute.

Named after the Lebanese capital Beirut, the sandwich was created by Beiruti immigrant Fares Sader in 1951 as a homage to his homeland. The original recipe saw sliced rosbife, tomato and melted cheese topped with za’atar inside a Lebanese-style flatbread (which Brazilians refer to as pão sírio, or Syrian bread). The sandwich was later popularized by São Paulo diner Frevo, which began incorporating variations to the traditional beirute, adding ingredients such as ham, mayonnaise and fried eggs.

Restaurant, Brazilian, $$$
Facebook
Email
Twitter
Pinterest
Copy link
Share
Map View
The Arais is another São Paulo sandwich created by an immigrant and is an even better example of the blend of backgrounds which makes up the food culture of this city. In his restaurant to the north of the city center, Armenian immigrant Missak Yaroussalian (nicknamed Carlinhos as Paulistanos could not pronounce his name) set about devising a new snack, attempting to adapt a beef sfiha, the open faced Syrian pies which were already popular in São Paulo at the time.

He spread his spiced beef mixture onto an open pitta bread before closing the whole thing and pressing on a warm grill. The sandwich took off instantly and soon gained several variations, with the diners’ favorite being the beef and mozzarella variety. 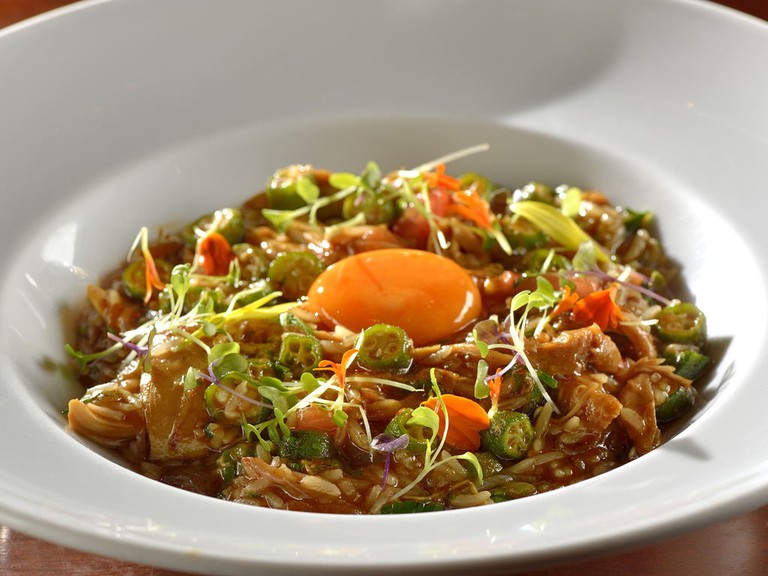 The buraco quente (literally, “hot hole”) is Brazil’s version of a classic sandwich technique which involves hollowing out a bread roll and packing it full of fillings. As the name “buraco quente” refers only to the method of preparation, all sorts of fillings and breads can be used and legitimately called a buraco quente. Traditionally though, the preferred filling is a mixture of ground meats, vegetables and herbs, like the version sold at the city’s classic Bar da Dona Onça, which includes ground beef, chopped boiled eggs, olives and chili.

Lusophones among you may realise that “cachorro quente” in Portuguese literally translates as hot dog. Because, well, that’s what it is. However, in São Paulo, a hot dog is a completely different beast and is the preferred late-night snack of many a clubber walking home from Rua Augusta. The two rules for a cachorro quente in São Paulo are as follows: first, the sandwich is pressed on a grill, making the roll flat and crispy; second, there are no rules.

In São Paulo, anything goes in a hot dog. At most vendors, ordering a “completo” will get you a sandwich as big as your shoe, with two hot dogs, mozzarella cheese, cheddar cheese sauce, creamy Brazilian requeijão cheese, ketchup, mayo, mustard, sweetcorn, mashed potato, shoestring potatoes, lettuce and maybe even a fried egg, if you’re lucky.

Yes, it sounds like an abomination and will have hot dog aficionados running for the hills, but after a long night of clubbing, how could you say no?

Literally translating as “crazy beef”, carne louca is a super-traditional Brazilian recipe, often served at birthday parties and Brazil’s midwinter Festa Junina celebrations. Oddly enough, despite being staple party food, the origins of the dish are unknown, as is its “crazy” name.

Preparing carne louca consists of cooking a beef eye-of-round roast in a pressure cooker, before shredding the meat and stewing with peppers, tomatoes, onions, olives and garlic, creating a gorgeously rich and flavorful mixture which is piled into bread rolls and scarfed down in amazing proportions by party-goers of all ages. Most sandwich vans will sell carne louca sandwiches, but to guarantee getting your hands on one, head over to a Festa Junina – or crash a birthday party.

Soccer, or futebol, is Brazil’s national sport and nowhere is it taken more seriously than in São Paulo. With three major clubs based in the city, there is always a match on at weekends and thousands flock to the stadiums to cheer on their favorite team.

Going to watch soccer in São Paulo is full of rituals, particularly when it comes to food. Whereas in Brazil’s northeast the pre-match food of choice is barbecued meat on skewers, and in Minas Gerais fans chow down on massive bowls of feijão tropeiro, Paulistano’s futebol food of choice is a good hearty sandwich.

While the aforementioned pernil (slow-roasted pork shoulder) is a popular choice, another soccer match staple is calabresa no pão, a grilled Calabrian sausage sliced lengthwise and served on a bread roll, topped with salad and vinaigrette. Streets outside soccer stadiums are filled with vendors selling these delicious sandwiches from the backs of their cars. Attending a match without eating at least one is heresy.