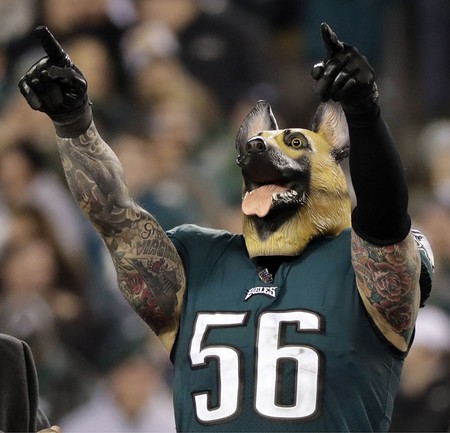 The Philadelphia Eagles have made it into the Super Bowl, giving them their first chance at a national championship since their foray into the 2005 Super Bowl (and the Phillies’ World Series win in 2008). But what’s going on with the curious headwear that you might see on many of their fans and players?

After decimating the Minnesota Vikings during the NFC Championship, the Eagles were on top of the world, but they haven’t always been at the top of the ladder. During the post-season contest, the Eagles became the first team in NFL history to simultaneously be a No. 1 seed and a betting underdog (the Falcons were expected to beat the Eagles at the time, and everybody thought the Vikings would prevail in the NFC Championship). This wasn’t helped by the fact that Carson Wentz, the Eagles’ star quarterback, tore his ACL early during the season, but even with Wentz down, the Eagles have pulled ahead, thanks to his replacement, Nick Foles.

It’s been a long time since Philadelphia has had a team in the championships, so Eagles fans are pretty excited and showing it in unique ways. From scaling Crisco-covered poles to temporarily banning all things Boston-related, Philly fans have been extraordinarily passionate since the big NFC Championship win, but the most mysterious sign of celebration might be the rubber German Shepherd masks appearing throughout the stadium stands. Why dog masks for a team named the Eagles, exactly?

Doggone it, you better believe dog masks will be allowed at @LFFStadium this weekend. Just make sure to take them off when you go through security.#FlyEaglesFly pic.twitter.com/0REb840ME7

The dog masks came about at the end of the NFC Championship Game when Beau Allen and Chris Long snagged the crazy head-coverings from fans and ran throughout Lincoln Financial Field while wearing them. Before that, when the Eagles played the Atlanta Falcons, Long and fellow player Lane Johnson pulled the same stunt. Shortly after, the NFL started selling underdog T-shirts, and if you want one of these, you can pick one up and do a good deed at the same time—the organization is gifting 100% of the T-shirt proceeds to charity. (This came about only after Chris Long, who’s donating his entire salary this year, put the NFL on full blast—but all’s well that ends well, right?)

Now, if you’re looking to buy a dog mask of your own for the Super Bowl, it’ll be a little tough, but it’s still doable. Stores across Philly are sold out of the mask, and Amazon and Walmart are struggling to keep them in stock as well. If you’re an Eagles fan absolutely dying for an underdog mask, why don’t you try a poodle or another kind of canine mask instead? Even if you can’t show your German Shepherd pride, you can still root for the underdogs.