Beyond the Bell: A Herstory Tour of Philadelphia’s Most Important Women 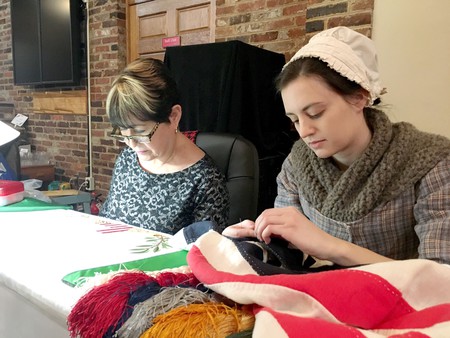 Philly history is focused on the Founding Fathers, but one resident wants to shine a spotlight on the women who’ve shaped the city’s past.

Rebecca Laureanna Fisher is a Haverford graduate who has made it her mission to tell the tales of Philadelphia’s most influential women. Fisher’s Beyond the Bell historical tours explore the lives of intriguing colonial women, ranging from change-makers to sex workers.

Fisher joined forces with her friend, Joey Leroux, to create the tour company in an effort to change the way we view history by focusing on Philly’s less-celebrated historical figures.

“What we’re saying ostensibly is that those are the people that matter,” she told Billy Penn when discussing tours that focus solely on men. “It’s not only historically inaccurate, but it also has consequences.”

Check out our new company shirts! 😍 Thank you to @saketsekhsaria for the pics and @customink for the sick tees!

Before starting the company, Fisher spent some time working for the Philadelphia Mural Arts’ Monument Lab and worked as a Philly Bikes tour guide. During this time, she became interested in how public history is affected by tourism, especially how omitted information can impact an entire country’s narrative and cultural legacy.

She began to make changes to her bike tour, including bits of history that most people would never get to learn. “I rewrote the script of my bike tour,” she recalled, “and designed an inclusive tour that touched upon the MOVE bombing, some cool Colonial women, racism in the Gayborhood and the ways in which Chinatown has struggled to exist in the face of the city’s ‘development.’”

In order to fund her tours, Fisher applied for grants from Haverford College. She was able to receive funding from the Hurford Center for the Arts and Humanities, and the Center for Peace and Global Citizenship. During the fall and spring semesters of 2017, she was able to test her tours with students, receiving great feedback.

After graduating in 2018, Fisher and Leroux made the tour official.

Great tour with future educators, leaders and activists from @haverfordedu! Pictured above: guide Rebecca talks about Hercules- one of George Washington’s slaves. See list of the names of those who would have served the first president in Philadelphia.

For Fisher, designing the tours was challenging. While William Penn stands atop City Hall, and Ben Franklin is depicted all over the city, identifying those monuments dedicated to women was trickier. Eventually, she decided to re-think the meaning of monuments and landmarks and got creative.

Instead of relying solely on statues and monuments, Fisher also uses houses where Philly’s important women gave speeches, statues of their husbands, and streets where they worked. Some of the notable women covered in the tours include Hannah Callowhill Penn, the wife of William Penn, Peggy Shippen Arnold, the wife of Benedict Arnold, and Nizah Morris, the founder of a Buddhist faith organization for people who identify as transgender. The tour also covers Rebecca Cole, the first African-American woman to graduate from the Women’s Medical College of Pennsylvania, Oney Judge, Martha Washington’s slave, and Eliza Sprout Turner, a poet and founder of the New Century Guild.

Beyond the Bell currently runs four different tours, each of which focuses on the mission statement, “the people are put back into people’s history.”