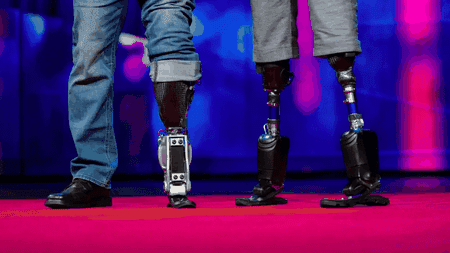 Four years ago, rock climber Jim Ewing fell 50 feet while scaling cliffs in the Cayman Islands – a life-altering accident that resulted in the amputation of his left leg.

At the time, the amputation model hadn’t fundamentally changed since the 1850s. When possible, amputees would be fitted with a prosthetic limb, consequently suffering full the loss of sensation and natural movement below their amputation.

Around the time of Jim’s fall however, an MIT research team led by rock climber, engineer, and biophysicist Hugh Herr, a double amputee himself, were developing the agonist-antagonist myoneural interface (AMI), a surgical procedure and neural interface that gives amputees precise, natural control of their prosthetic limbs.

Using the AMI process, researchers discovered a way to manipulate and sculpt body tissues using surgical and regenerative processes to allow for dynamic muscle interactions. Specifically, they found a way to connect nerves to allow for prosthetic limb control and proprioception – the process that lets us feel where our feet are without seeing them.

Earlier this year, Ewing underwent the first human implementation of AMI surgery at Boston’s Brigham and Women’s Hospital. Surgeons created tendon pulleys and reattached his tibia bone to the opposing muscles, while the AMI procedure reestablished the neural link between Ewing’s ankle-foot muscles and his brain.

Today, when Ewing moves his phantom limb, the reconnected muscles move in dynamic pairs, causing proprioception signals to pass through nerves to the brain. He experiences normal sensations with ankle-foot positions and movements, even when blindfolded. This March, he returned to the Caymans to scale the same cliffs he’d fallen from using his bionic, neural-interfaced prosthesis.

‘Previously, humans have used technology in a tool-like fashion,’ says Herr. ‘We are now starting to see a new era of human-device interaction, of full neurological embodiment, in which what we design becomes truly part of us, part of our identity.’

In the future, NeuroEmbodied Design could extend beyond limb replacement, and redefine human potential.

‘In this century, designers will extend the nervous system into powerfully strong exoskeletons that humans can control and feel with their minds,’ said Herr in his TED talk. ‘Muscles within the body can be reconfigured for the control of powerful motors, and to feel and sense exoskeletal movements, augmenting humans’ strength, jumping height and running speed. Humans may also extend their bodies into non-anthropomorphic structures, such as wings, controlling and feeling each wing movement within the nervous system. During the twilight years of this century, I believe humans will be unrecognizable in morphology and dynamics from what we are today. Humanity will take flight and soar.’

For more on the capacity for tech to augment human capability, read about the headset capable of reading your mind.
.