Hopeless with Foreign Languages? This Virtual Reality App Could Change That 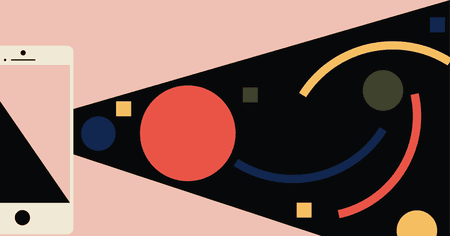 Verbal communication, from the way we speak to the metaphors we use, is intrinsically linked to our physical bodies.

If we’re feeling sad, we might say we’re ‘down’, and slump in our chairs. If we’re happy, we might say we’re ‘up’, and carry ourselves with a straight posture. The connection “is so intrinsic, sensorimotor regions in our brain associated with performing motor actions light up when we speak the word associated with that action,” writes Christian David Vázquez Machado, a researcher at MIT’s Fluid Interfaces Lab.

In an effort to utilize this natural connection to enhance foreign-language learning, Vázquez Machado and a team of MIT scientists have created the virtual-reality system Words in Motion.

The software, which works with the HTC Vive VR headset, recognises a wearer’s actions and presents the corresponding name of the action in the target language. For example, if a user hoping to learning Spanish makes strokes with a virtual paintbrush, the word pintar, Spanish for paint, appears in the virtual scene.

At a university in Tokyo, Vázquez Machado and his team used the system to create an interactive game for English-language students. One student, wearing the VR headset, is immersed in a virtual kitchen. The other students, outside the VR world, verbally instruct the performer to cook a virtual meal. In addition to basing the game on an established teaching method known as kinaesthetic learning (learning that takes place by carrying out physical activities, rather than listening to a lecture or watching a demonstration), the VR technology elevates the experience by creating a meaningful context in which the entire class can understand and practice the foreign language.

In a separate test of the system’s effectiveness, Vázquez Machado carried out an experiment with 60 MIT students tasked with learning 20 new words in Spanish. Participants were divided into three groups: a text-only group learning outside of virtual reality, a group who used Words in Motion to learn kinesthetically in virtual reality, and a group who observed words inside virtual reality without performing any actions.

Although the text-only learners outperformed both VR groups immediately after the experiment, the participants who used the kinaesthetic Words in Motion system showed equal vocabulary retention to the text-only students after a week’s time. While the results showed the VR system was equally effective in language retention as traditional learning, the system’s use of physical motion and meaningful context may encourage foreign-language learners to stick with the practice.

Virtual reality applications in the classroom allow us “to imagine a future where learning a new language is more engaging and playful,” writes Vázquez Machado. “Instead of sitting down and memorising lists of words, out of context (and quite possibly meaningless to the student), we can engage our bodies and tap into the physicality of language both to learn better and engage better with the class.”

While Words in Motion was created for research purposes and is not available commercially, it is part of a growing wave of VR applications helping us to explore the world in undiscovered ways.

Check out how virtual reality is helping elderly people explore the world.