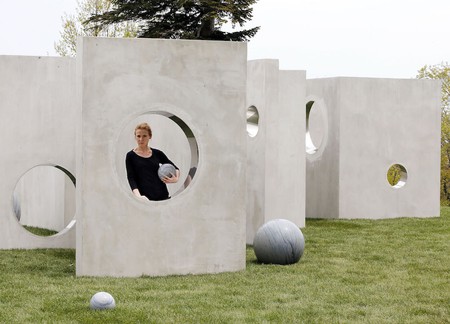 A contemporary vision in steel and concrete, Polish-born, Berlin-based sculptress Alicja Kwade’s TunnelTeller (2018) stands in arresting juxtaposition to the historic Great House on the sprawling Crane Estate in Ipswich, Massachusetts. 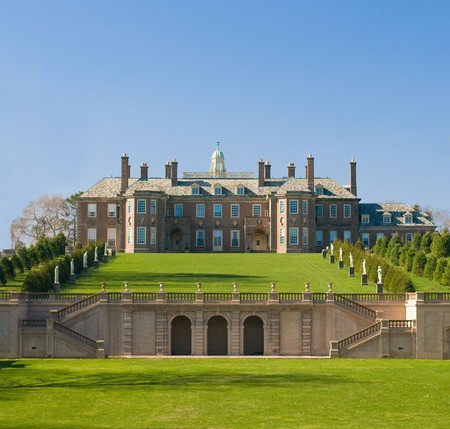 Boasting 59 rooms and a 17th-century Stuart-revival aesthetic, the English-country marvel referred to as the “Great House” that stands atop Castle Hill today replaced an Italian-style villa that Crane originally built on the site. The villa was demolished only 10 years later in 1925 after Mrs. Crane declared that it wasn’t to her taste.

“That kind of extravagance was indicative of a Gilded Age fortune,” TunnelTeller curator Pedro Alonzo told Culture Trip from within the building’s magnificent foyer. “Dilution of wealth and property taxes made this place impossible to maintain, so eventually they sold it to The Trustees,” he said, referring to the the nation’s first and Massachusetts’s largest nonprofit organization dedicated to conservation and preservation.

An independent curator who, in partnership with The Trustees, developed the Massachusetts-based public art program “Art & the Landscape” in 2016, Alonzo was tasked with finding an artist whose work would honor the Crane Estate’s rich, layered history and pristine natural beauty. With so many visual facets to the Estate, Alonzo faced the innumerable possibilities until he discovered that from 1920 through 1949, a hedge maze stood on the grounds.

“I had seen Alicja’s work at 303 Gallery [in New York City] and it reminded me of a maze, so I immediately called her,” Alonzo said. What Kwade has since created is a 1:1 scale of the original labyrinth. Kwade’s commission, unveiled at a preview on May 17, 2018, serves as as the annual venture’s third edition, following Sam Durant’s The Meeting House in front of the Old Manse in Concord and Jeppe Hein’s A New End at World’s End in Hingham. 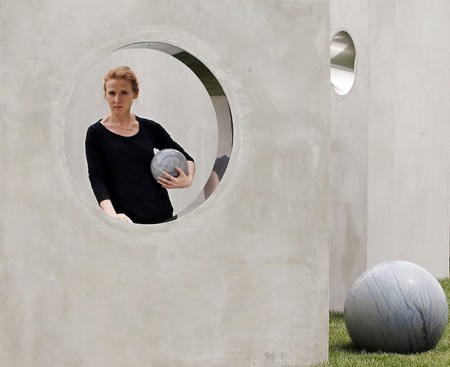 A titular reference to Crane’s middle name and the narrative powers of art, Kwade’s TunnelTeller is a monumental concrete structure dotted with circular apertures that frame various perspectives of the mansion and points across the landscape. Smooth, hypnotic spheres of blue Brazilian macauba stone lay around and within the walls like small globes that conjure a balance between ground and sky, the natural and the man-made.

An amalgamation of the profound complexities that inform Kwade’s practice—space, time, reality, and science—the artist’s site-specific installation for the Crane Estate is her first major large-scale public commission in the United States, and in staying true to her visual lexicon, TunnelTeller initiates a new dialogue with its historic surroundings.

Culture Trip sat down with Kwade and Alonzo in the grand entrance to the Great House to speak with them both about the newest edition of “Art & the Landscape.” 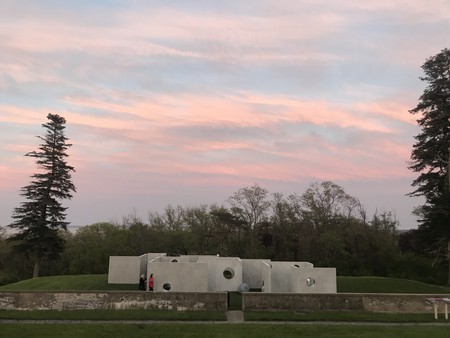 Culture Trip (CT): Throughout your practice, seemingly banal items are used to communicate heavily esoteric concepts. How and when did you begin to engage with such profound themes as space, time, and reality?

Alicja Kwade (AK): Well, we all have desires and interests, so I didn’t sit down one day and think, “Which way will I go?” It all comes up naturally—I’ve always been interested in these things. So at a certain point, when I started to work professionally as an artist, they [inevitably] came up again. Beyond time and space, it’s about society and being human.

CT: How do you understand reality? Is it something you subscribe to?

AK: I don’t think there is a reality at all. There are just temporary agreements on what reality may be—and of course we are very limited by this. There is a reality that we experience through our limited senses, but it’s also about what we do to create it as a troop of animals [that must] survive together. That’s more of a social reality, which we [contribute to] every day. So yes, that is “reality,” but there is no true reality.

CT: What about the nature of illusion captivates you?

AK: Even if you look at science, it’s very much [steeped in] society and culture. The illusion is a social one, and it’s interesting for me to simply [observe] where it begins and ends. I’m mostly interested in, say, “unfolding” things to see what they’re made of. 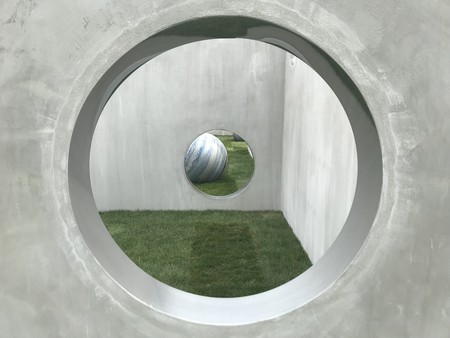 CT: Speaking of which, how do you choose what materials to use?

AK: A concept calls for a specific material, and there is no other choice—in most cases. The concrete [that comprises] TunnelTeller is a modern material that we use to build. Same with steel. These are two components used to build our cities and our reality. So it was clear to me that I wouldn’t use copper and bricks, but steel and concrete. It’s not intuitive—I know why it’s needed. I use a material because I’m aware of its characteristics—either chemical or symbolic. I use gold because I know its meaning. I use copper because I know what copper is used for and what it stands for. But I don’t use gold or copper because I like them or admire their colors.

CT: Who are your artistic and philosophical influences?

AK: There’s a pool of things I’m interested in and a pool of sources. In my case, it’s spread out between philosophers such as Elena Esposito, physicists like Lisa Randall, all the way to René Descartes and Immanuel Kant, so it’s really a mixture. With art, I’ve been inspired by Gordon Matta-Clark and Robert Smithson, but it’s not a constant thing—[my influences are] always changing.

CT: How would you describe your work? Is it Minimalism? Conceptualism? Do you want it to be categorized?

AK: You can’t really call it Minimalism or Conceptualism because these are closed art historical terms which have been used to define a certain movement which exists in the past. So I wouldn’t call myself one or the other, but I use the language of both. I would say my work is definitely Conceptual and I use Minimal language to, hopefully, create something else. 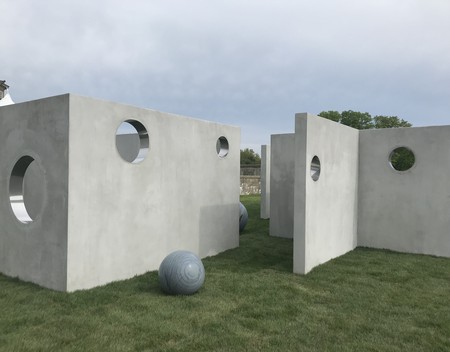 CT: Why is sculpture your chosen art form?

AK: It’s not something you really choose. When I was a student I tried to paint but that was definitely not my language. Sculpture just comes naturally.

CT: How did “Art & the Landscape” come about?

Pedro Alonzo (PA): The Trustees had an interest in developing a public art program, and they invested a lot of time and money into making their properties more user-friendly. Once they had that infrastructure, they wanted to change the perception of the organization, and art was an interesting vehicle for them to do that. They hired me to help them develop this program, “Art & the Landscape,” and to curate it.

I do a lot of work in open space, but I had never really done anything in open space—it had been largely urban or in museums, so I was really excited for this challenge. In the same way that Alicja’s concepts dictate her materials, the site demands an artist. This is the first site I visited, and it’s the most visited site of all their properties. I thought this would be easy—but it really wasn’t. It’s so beautiful and dynamic here and there’s so much history. I was looking for artists who were interested in embarking on a project that wasn’t strictly within the confines of the art world, and in engaging with other audiences in compelling ways; in breaking away from the idea that art is an object to contemplate—this passive relationship to art.

AK: I did outdoor works before, but you need the opportunity, the budget, supporters, but I believe in the importance of public sculpture. We need museums, but it has to spread out of the museum to reach other people and to give art another chance to reach new groups of people.

CT: How was the experience and process of creating a large-scale, outdoor sculpture different from creating for a contained, white cube space?

AK: I react to every space I exhibit in. There are struggles with public outdoor sculptures: security, stability, the weather. But it’s not that different, because I create each artwork from nothing depending upon the space. Even if there are slight differences in the space, the entire artwork will be different. 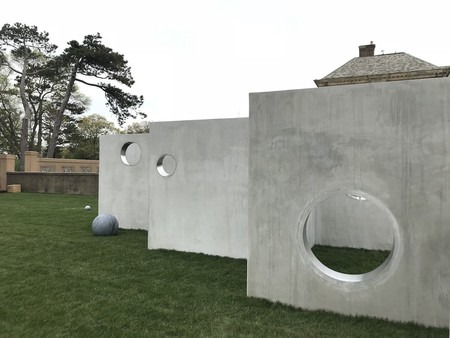 CT: How would you say TunnelTeller references the Crane Estate?

AK: I wanted to bring an urban element to the Estate. I used pipes because the Crane family did their business with pipes. I used the original maze as inspiration. The history helped me build my concept.

CT: How do you hope that visitors interact with the installation?

AK: I hope that it addresses different people differently. Kids can play on it—they don’t have to care about it [as a work of art]. I hope that people enjoy the different sections of the view. That is what public sculpture should be about.