What to Know About Visiting Antelope Canyon in Arizona

Tourist hotspots don’t always live up to their pictures, but in the case of Antelope Canyon in Arizona, the pictures themselves simply don’t do the place justice.

Navajo desert scenery is famously epic. Cast in countless hues of orange and red, you are confronted with vast rock formations at every turn. The water-worn ravines of Antelope Canyon, however, run deep into the earth, and it is here that you’ll discover the most ethereal formations, carved from sandstone that seemingly changes color as you pass. 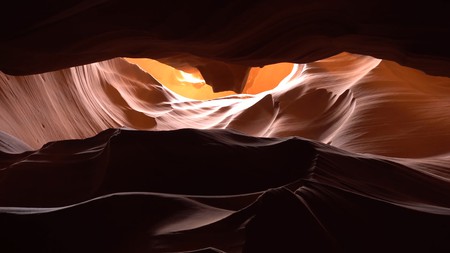 What to expect when you get there

Slot canyons like Antelope differ greatly from vast sites such as the Grand Canyon, characterized instead by deep and very narrow channels.

The upper part of Antelope has 120ft (37m) walls that tower over narrow passages that are easily hiked. In contrast, the lower part of the canyon is a lot trickier to navigate. Forming a shallow V-shape, the route occasionally involves some clambering and shimmying in order to get through gaps. This is all part of the adventure, though, and it pays off. Otherworldly sights await you.

The place “where water runs through rocks”

The Navajo name for Upper Antelope Canyon is Tsé bighánílíní, meaning “the place where water runs through rocks.” It was created over centuries by flowing rainwater cascading into the canyon, dredging grit and sand with it.

Flooding is still a major concern here. Due to the unusual topography and the risks posed in the Lower Canyon during wet weather, Antelope and its surrounding desert is closely monitored for any sign of storms.

Even a small amount of rain falling many miles away can cause water to rush into the slots and rise at an alarming rate. These so-called flash floods are the very reason the canyon stands as it is today, in all its cavernous beauty.

Happily, the only thing you’re likely to see streaming into the passageways are beams of light, and you can relax in the knowledge that all due care is taken to keep tourists safe.

So what exactly is a slot canyon? Soft rock and extreme climate cause cracks to the ground surface, and one tiny fissure is gradually made larger by heavy rainfall rushing into the void, bringing sand and other debris with it. Repeated over time, this erosion eventually wears down the rock to create deep ravines below – known as “slots.”

Best time to visit? From April to August, when the famous celestial sunbeams strike the canyon floor and tours are hardly ever canceled due to bad weather.

The entrance fee to the Navajo National Park is expensive but well worth the price, as money goes toward running and preserving the site. Located on a Native American reservation, it provides a much-needed income for many locals, too.

It costs to enter both canyons, so if budget is an issue then decide which you’d like to explore, based on what you want to get out of the visit and whom you’re traveling with.

The Upper Canyon is the most popular, since it’s easily accessible. The entire length is at ground level and requires no special agility – suitable for children and adults alike. Wheelchair users may encounter issues with passage width, but plenty have accessed without too much difficulty, depending on how deep or compact the sand is.

The Lower Canyon is deeper and harder to reach, but the effort is worth it, as the canyon is more spectacular from the lower level. The descent is about 100ft (30m) via steep staircases and ladders. Falling sand from the opening above can make the metal steps slippery, so do take care and consider taking a hat to cover your head from the lightly falling debris.

How to pick the best tour of Antelope Canyon

Tour guides are knowledgeable and friendly, many with personal affiliations to the reservation and the canyon long before it became a tourist site.

Plan your trip far in advance. You cannot enter either part of the canyon without booking a tour, so organization is key. It’s sometimes possible to book tours on the day, but it’s not worth the risk of missing out.

One of the major bonuses of having a tour guide along with you is their experience photographing the canyon. Guides know exactly the right locations, angles and positions from which it’s best captured – not to mention the settings on your camera that show the light and vibrant hues of the rock at their most vivid.