Tom DeLonge Is Your 'UFO Researcher of the Year' 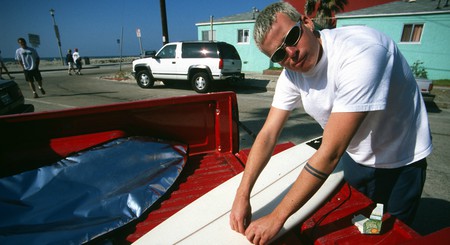 Former Blink-182 vocalist and guitarist Tom DeLonge’s holds a passion for all things extraterrestrial. Since his ex-band released the track “Aliens Exist” on their 1999 album Enema of the State, DeLonge’s interest in the subject has unfolded piece by piece, gaining serious momentum in recent years.

His project Angels & Airwaves, created in the wake of his first breakup with Blink-182’s Travis Barker and Mark Hoppus, is more than a subtle nod to his space dreams. In an interview with Paper in 2015, he discussed losing time when on vacation near Area 51, believing that aliens tried to communicate with him, and that he is confident that humans have been in contact with alien life for a long time. In October 2016, a Wikileaks dump revealed that DeLonge had been emailing Hillary Clinton’s campaign manager John Podesta about UFOs and how the government might be in possession of extraterrestrial bodies. At the beginning of last month, it was announced that DeLonge would be directing a sci-fi film about aliens and skateboarding.

To honor the Blink expat’s unwavering commitment to discovering the truth of what’s out there (and what could already be here), the International UFO Congress and Open Minds Productions have selected DeLonge as this year’s “UFO Researcher of the Year.” What is the International UFO Congress, you ask? Formed in 1991, this Arizona-based operation is dedicated to the spread of all information related to ufology. They host an annual conference where members gather to hear experts discuss topics like abductions, crop circles, government conspiracies, and other paranormal activities. They also sell these sweet t-shirts and poster.

In conjunction with the award, the organization released a video detailing why DeLonge was selected, and it’s as creepy as you would expect. DeLonge himself makes an appearance about five minutes in, giddily thanking the International UFO Congress for this generous gesture of prestige, and explaining how he’s into “some serious shit.”

“It’s been a crazy whirlwind of a year or two. There’s a lot that I can’t say, but there’s some that I can,” DeLonge says, like a parent scrambling to find to the right words when their child asks about sex far earlier than they anticipated to have “the talk.”

DeLonge continues: “I’m just like you guys. I spent 20 years up all night, reading about Roswell, Dulce, Serpo, Churchill, the crashes here, Nazis building craft there, Antarctica, what’s on Mars, what’s on the back of the moon, structures, anomalous this… I mean, I’ve done it all. I know it all.”

At the conclusion of the video, DeLonge leaves us with one final message: “Just remember that whatever happens in the civilian world, it’s game on.” Cool.

Watch the video below, but just make sure to take off your tin foil hats first.