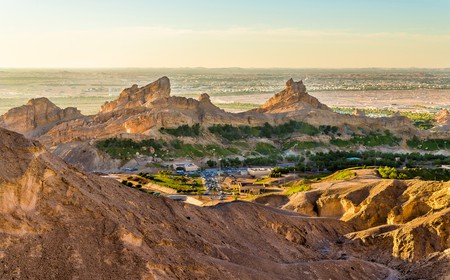 Located in the heart of the city, the Al Ain Oasis is a 3000-acre site filled with more than 147,000 date palms and over 150,000 trees of other varieties. Eight majestic gates lead into the tranquil, jungly maze allowing visitors to escape the hustle and bustle of the city. If you fancy going, you’ll learn all about the area’s delicate ecosystem via a dedicated app and cool visitor map, which was specifically developed to show what life was like in the desert before the oil industry completely transformed the landscapes of the UAE.

On its inclusion in the World Heritage list, Unesco said: “The Cultural Sites of Al Ain (Hafit, Hili, Bidaa Bint Saud and Oases Areas) constitute a serial property that testifies to sedentary human occupation of a desert region since the Neolithic period with vestiges of many prehistoric cultures. Remarkable vestiges in the property include circular stone tombs (ca 2500 B.C.), wells and a wide range of adobe constructions.”

Al Ain is currently being transformed into a dedicated visitor attraction which incorporates many of the area’s historic castles and forts, including the extraordinary Palace Museum. With over 15 million annual visitors, the UAE has, in a remarkably short period of time, become one of the fastest growing centers for tourism in the world. While also known for lavish lifestyles and gorgeous apartments and resorts, this much needed cultural addition will hopefully pave the way for further historic attractions (fingers crossed).