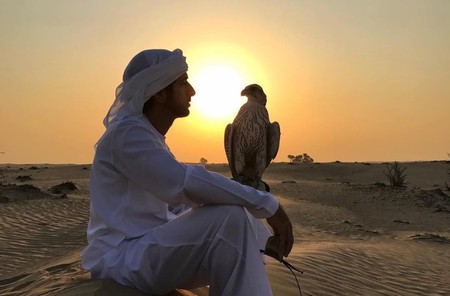 Sheikh Hamdan bin Mohammad Al Maktoum, the Crown Prince of Dubai, has been making waves on social media for years. Boasting over 6.3 million followers on Instagram and inspiring numerous fan pages from devoted followers, Sheikh Hamdan is considered one of the most eligible princes in the world. His Instagram posts show a world beyond his image as a wealthy future ruler, revealing a charitable, avid sportsman with a flair for poetry. Here’s what you need to know.

As the fourth child of Sheikh Mohammed bin Rashid Al Makhtoum, Sheikh Hamdan replaced his older brother as Crown Prince of Dubai in 2008. Having graduated from Royal Military Academy Sandhurst, he joined the ranks of alumni such as Prince William and Prince Harry. His other roles include sitting on the Dubai Sports Council; participating in the Dubai Autism Centre; and heading the Sheikh Mohammed bin Rashid Establishment for young entrepreneurs. His Instagram feed gives a real insight into his passions and interests, from his love for travelling and exploring new places to his commitment to his family.

A keen explorer, Sheikh Hamdan has travelled across the globe, experiencing different cultures and using his photography skills to capture their natural beauty. From Mongolia and Uzbekistan to New Zealand and Tanzania, following his Instagram account takes you on a journey around the world. He also shares some beautiful shots of his home city Dubai.

His love for photography has led him to establish the Hamdan International Photography Award, which aims to nurture artistic talent and encourage the appreciation of art and culture.

Sheikh Hamdan’s father, Sheikh Mohammed bin Rashid Al Maktoum, is prominently featured on his Instagram along with his brothers, sisters and other members of his extended family. His loving posts demonstrate his devotion to his relatives, endearing him to his fans and followers.

He also shared this famous shot of the two Sheikhs on the London Underground:

Under the pen name Fazza, borrowed from the legendary Arabian knight, Sheikh Hamdan writes Arabic poetry. As odes to his mother, father and siblings, particularly his elder brother who passed away, his poems are both personal and philosophical. Fazza’s poetry can be found on Instagram or on sites which offer English translations. You can also find videos of him reciting his poetry.