Abu Dhabi has a reputation for being one of the most sophisticated Emirates, and the cuisine is no exception. From desert dining to Italian gelaterias, there is a wide range of food to enjoy, with local and international tastes catered for abundantly. We’ve revisited Abu Dhabi to find out what new cuisines are on offer and whether Abu Dhabi’s Michelin-starred chefs have transformed the desert city into a culinary destination.
Spice Mela
Restaurant, Middle Eastern$$

Spice Mela is an Indian-inspired restaurant with romantic views of the Arabian gulf. The dishes aren’t limited to one region in India, which has created a satisfyingly varied menu. Before the meal, customers are served a bowl of deep fried vegetable crisps instead of the usual poppadums; with a mix of purple potato, sweet potato, taro root and banana crisps, it is a delicious start to an even more satisfying meal. The dishes come from various regions such as Rajasthan and Punjab, as well as the southern Indian regions. Menu recommendations include chef Siddharth’s konkan green chicken, which is a succulent chicken prepared with fresh green herbs, cashew nuts and hot green chillies. 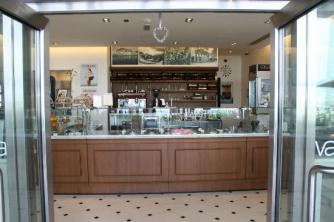 For those looking for an Indian restaurant which is more regional in its approach, Indigo is ideal. Cooking up North Indian cuisine, the traditional dishes are combined with a modern, avant-garde approach to cooking. For two people to share, the sikandari raan comes highly recommended, consisting of a pot roasted leg of lamb, stuffed prunes, pickled onion and cheese baked under the ‘purdah’ pastry and served with roast gravy. Diners can also find contemporary favourites on the menu such as biryani, kebabs and chaat.

Vasa Vasa is an authentic Italian gelateria located in Abu Dhabi’s Al Muneera residences, with stunning views of the Al Raha Beach. The ethos behind Vasa Vasa, is to create products made of 100 percent natural ­ingredients, with ingredients imported from Italy. Using Cattabriga machines is what sets Vasa Vasa’s ice cream apart from the run-of-the-mill scoops, as the machines make ice cream softer and creamier. The gelateria serves a variety of chocolate, vanilla, pistachio and hazelnut flavours. The pistachio ice cream is slightly yellow in appearance which is down to the company not using any artificial additives.

Villa Toscana mixes the rusticity of hand-crafted, regional Italian specialities with panache in a modern and sophisticated setting, with the inspiration behind the regional dishes coming from Tuscany, Umbria and Emilia-Romagna. Despite offering a wide range of tasty pizzas for takeaway, it is the a la carte menu in which they excel: try the veal rolls stuffed with porcini mushrooms, and the cheese stracciatella, Milanese style, served with mashed potatoes and green pepper veal jus. The menu is twinned with a sophisticated and thoughtful wine list.

Award-winning Rodeo Grill at the Beach Rotana is not only Abu Dhabi’s first steakhouse; it is also widely regarded as the best. The high-backed emerald green leather chairs give the restaurant a truly intimate and cozy feel. The various cuts of meat are some of the most tender and tasty you will find in the whole of the Emirates. Ranking as one of the most popular dishes on the menu, the Blackmore 9+ is a superior Wagyu steak. The cattle is grain fed for a minimum of 600 days, which creates a minimum marble score of grade 9+ and will be one of the finest steaks you will ever have the chance to try. As well as steaks, the restaurant also has an offering for other tastes and requirements, including their famous Tijuana-style Caesar salad.

As it name suggests, Marakesh is a sophisticated Moroccan restaurant located in the center of Abu Dhabi. Even if there were a number of Moroccan-inspired restaurants in Abu Dhabi (which there isn’t), this restaurant would still rank amongst the best. Its interior is a very opulent and resembles a banquet hall. Every day, there are a number of post-dinner entertainments such as belly dancers, singers and Moroccan bands. The menu consists of a Moroccan classics like tagines, along with North African-inspired salads, fish, seafood and meat grills.