Everything You Need to Know About Princess Haya 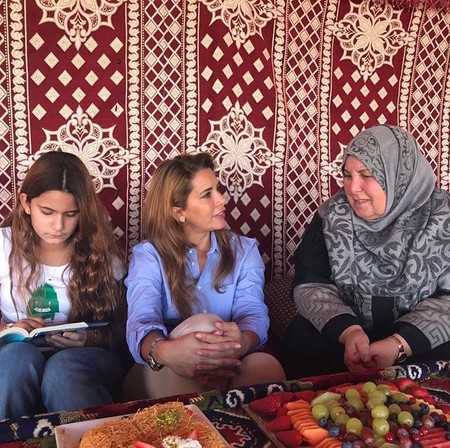 Princess Haya Bint Hussein is a well-known figure throughout the UAE, belonging to two Middle Eastern royal families. While she’s a fashion icon who can be seen socialising with Queen Elizabeth II at the Ascot races, she has plenty to back up her status as one of the most respected and approachable royals in the world. For starters, she has a degree from Oxford University in politics, philosophy and economics and is a huge fan of Guns N’ Roses, as well as of P!nk’s music. Here’s what else you should know about the princess.

Princess Haya Bint Hussein may be married to the Vice President and Prime Minister of the United Arab Emirates and Ruler of Dubai, His Highness Mohammed bin Rashid al Maktoum, but before becoming a UAE royal, she was regal in her own right.

Born in Amman, Jordan, on May 3, 1974, Princess Haya is the daughter of the country’s late King Hussein and Alia Al Hussein. Jordan’s international airport in the capital city of Amman is named after her mother, who was King Hussein’s third wife. She died in a helicopter crash when Princess Haya was just two years old.

Princess Haya is one of 11 siblings; her half-brother Abdullah II of Jordan currently has the throne as the Hashemite family continues their rule, which began in 1921.

Princess Haya’s Instagram account, @hrhprincesshaya, is booming, with hundreds of thousands of followers. Her profile documents everything from her work as a UN Messenger of Peace to the charity projects she’s involved in and beautiful pictures of Dubai and the Middle East region.

Don’t be surprised to see plenty of equestrian pictures on her page: Princess Haya was the first female to represent the Kingdom of Jordan at an international showjumping event, when she was just 13 years old. Another aspect you’re guaranteed to see on her page is how proud she is of her family.

Princess Haya’s children are a big part of her life

She has paved the way for women

"بصفتي سفيرة الأمم المتحدة للسلام، أشعر أن من واجبي اليوم المطالبة بأن ندرك جميعاً أن السلام قضية تستحق النضال من أجلها …. وهذا هو الوقت المناسب للنضال من أجل تحقيقه … وربما أفضل الطرق لذلك هو أن يُمنح الإنسان ما يعيش من أجله " “As your UN Messenger of Peace, I feel unequivocally that today my obligation is to demand that we recognise that peace needs to be fought for… and that now is the time to fight… and that perhaps the best way to fight is to give people something to live for.” #WFP #UN #Humanitarian @worldfoodprogramme_official

This royal has a number of firsts attached to her name: she’s the first woman in Jordan to be licensed to drive heavy vehicles and articulated lorries (inspired by her father’s nickname, ‘the Trucker’), so it’s no wonder her favourite TV show is Iced Road Truckers. She was the first woman and Arab to become a Goodwill Ambassador to the United Nations World Food Programme, and founded the first food assistance NGO – Tikyet Um Ali – in the Middle East.

As well as horse riding since childhood (she was chair of the International Equestrian Federation 2006 – 2014), Princess Haya has spoken in the past about her love for shooting, falconry, water sports and driving fast cars. She believes sport is great for teaching discipline and team spirit, as well as keeping you physically and mentally fit.