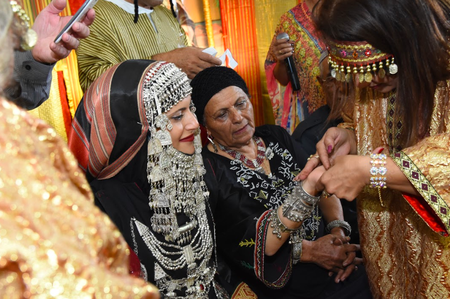 Henna being applied to an Israeli bride | © Mor Segal

Israel’s Mizrahi Jews, who migrated from North African and Middle Eastern countries, perform a lavish henna ceremony before weddings to bless the future bride and groom.

The earliest records of henna, a reddish-brown dye used to decorate the body or colour the hair, come from ancient Egypt, approximately five-and-a-half thousand years ago. Common throughout Africa and Asia, it made its way to Israel with the mass immigration of the Mizrahim, who make up roughly half of Israel’s Jewish population.

Although it used to be a source of discrimination in the nascent Jewish state, today, the henna is a symbolic event and a statement of pride for those of Mizrahi heritage.

Noam Sienna, an expert on the Jewish henna rituals, tells Culture Trip: “It has been used for a wide variety of purposes: a folk medicine for skin ailments; a cosmetic dye for hair, nails and fabric; a protective barrier against demons; a sign of celebration; and a marker of ritual transitions or rites of passage”. 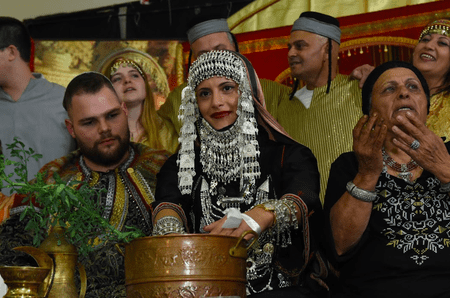 The bride and groom | © Mor Segal

The main purpose of the henna ceremony is to bless the bride and groom with good luck, health and fertility, and to protect them against the evil eye.

Rituals will differ depending on the family’s ethnic background. At a Yemenite Israeli ceremony, the mothers or grandmothers of the bride and groom circle a fresh egg over the couple’s heads as a symbol of fertility before throwing it on the floor for good luck. To ward off the evil eye, family members may also place sadab (a herb) and sometimes, even garlic on the bride’s head. 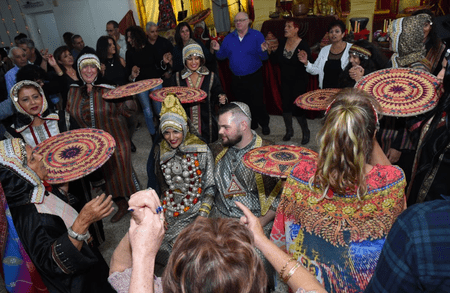 At a Moroccan Israeli henna, someone who has had good luck in their marriage and good health will be chosen to apply the henna paste onto the hands of the bride and groom, then the family and guests. A gift exchange later takes place whereby the mothers of the couple give a piece of jewellery to their future son and daughter-in-law. The bride is often given gold bangles brought from Morocco, known as demlij, which are often passed down through generations.

A common feature of henna festivities is plenty of dancing and music from the family’s homeland, whether that be Morocco, Yemen, Iraq or India.

The most eye-catching aspect of the tradition in Israel is undoubtedly the spectacular clothing worn by the bride. A Yemenite Israeli will be seen wearing a mesmerising headdress called tashbuklulu, which towers and glistens way above her head. At a later stage in the ceremony, she changes into a smaller headdress called a gargush (or a karkush). 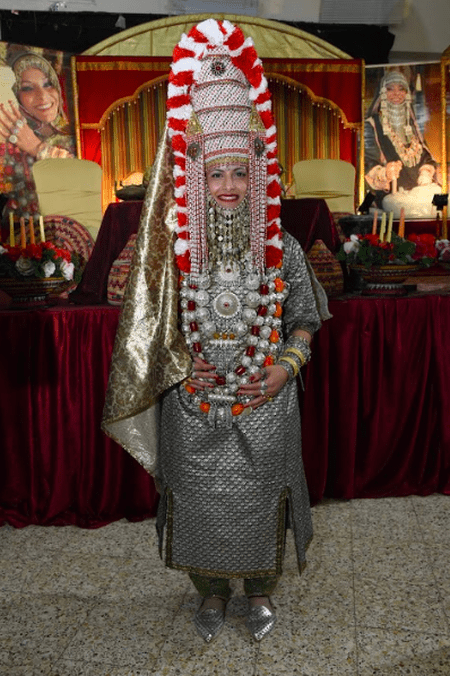 Jewellery features in abundance, on every finger and on each arm, while the chest is covered with necklaces of silver, pearls, coral beads and amulet cases. These traditional outfits can weigh up to 10 kilograms, symbolising the burden of marriage and the beauty of the new relationship about to be created.

The groom dons a traditional cap, complete with mock payot (long sideburns) and a robe known as galabiya. At a Moroccan-Israeli henna, men and women wear kaftans and the bride is given a special dress called kshwa kbeerah (‘the big dress’ in Moroccan).

Foods from the homeland

Again, the food found at this occasion depends on the origin of those involved. At a Yemenite henna, expect plenty of jahnun (a slow-cooked pastry), malawah (a doughy pancake) and zhug (a spicy sauce), while its Moroccan counterpart always features a sweet table full of traditional cookies, which are meant to symbolise a sweet life for the bride and groom. You might also find seksu tfaya (couscous with caramelised onions and squash) at a Moroccan Jewish event, while an Iraqi Jewish ceremony will offer hajji bada, a lightly spiced round cookie usually with an almond or pistachio on top.