The Meaning Behind Traditional Patterns in Ukrainian Embroidery 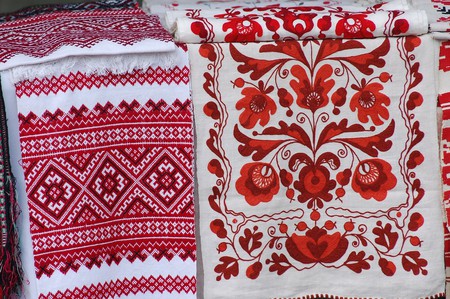 The symbolism of Ukrainian embroidery contains a hidden meaning. Not without purpose, locals carefully choose vyshyvanka (the traditional Ukrainian embroidered shirt), since the ornamentation is a coded pattern that serves as a charm. Some of the ornaments protect you from trouble, others give good luck and prosperity. Meanwhile, the randomly embroidered symbol can change your fate or cause distress and anxiety.

All of the ornamentation is conventionally divided into three groups: plant and floral, geometric, and zoomorphic. The latter two are used more rarely. The symbols are also distributed according to the regions of Ukraine. Traditionally, geometric patterns prevail in Western Ukraine, while Southern and Eastern Ukraine are characterized by plant and floral ornamentation. Such a phenomenon can be explained by the varying culture, natural landscapes, and, in some cases, even the mentality of the people. 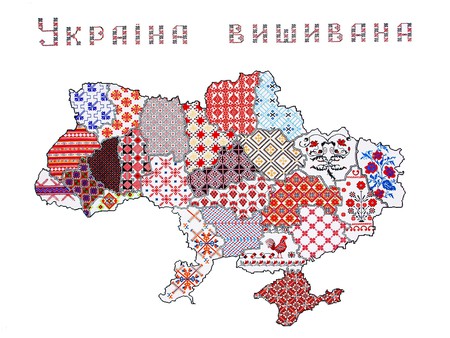 Flowers, branches, and leaves reflect the purity and prosperity of the family. They mean constant renewal and infinity. Therefore, wedding dresses were usually embroidered with florals. For instance, grape clusters embody joy, associated with the creation of a unit of society. Oak and guelder rose (kalina in Ukrainian) also form a part of the symbolism, which are most often depicted in feminine and youthful embroideries. These patterns harmoniously combine a magical and immortal beauty with incredible power. A laurel branch or wreath is the emblem of glory. 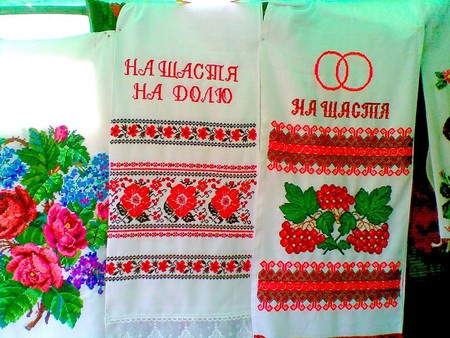 Geometric patterns are mostly related to the beauty of Ukrainian nature. As traditional embroidery has pagan roots, some of the symbols are intertwined with Slavic mythology. Thus, the rhombus is a symbol of fertility. It promotes the expansion of the family and the improvement of its well-being. Stars symbolize the ancient idea of the universe, which is distinguished by a certain order and harmony. The triangle represents the Holy Trinity and is the strongest Christian defense, while the crosses have powerful tools against evil spirits and bring success in all endeavors. 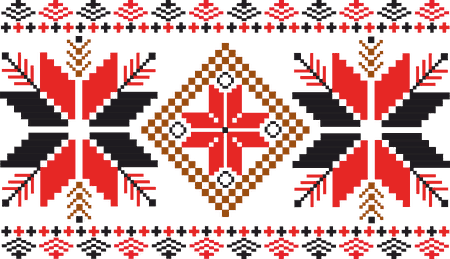 The embroidery of animals and birds are ritual symbols. They are rarely depicted on clothes, but on rushnyk (embroidered towels) or various charms, they possess special significance. Doves and roosters are the characteristic ornaments of a wedding towel, for example. In such cases, birds are inclined toward each other. Moreover, they usually keep a twig of a guelder rose in a beak or sit at the roots of a tree. A similar composition is a sign of the origin of a new family. Butterflies personify angels, and swallows mean good news. 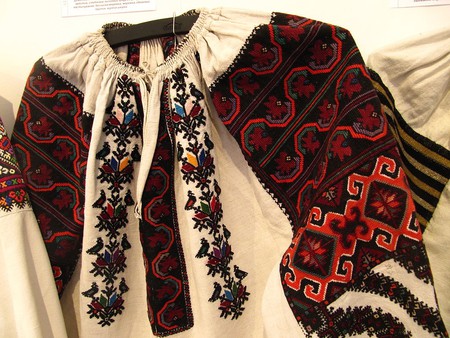 Many years ago, embroidery was considered to be a ritual, conducted on certain days, channeling positive energy and clear, light thoughts into the work. It took a couple of weeks or even a month to complete a vyshyvanka. Fortunately, this kind of craft has become more convenient today. There are a lot of opportunities to create quick and inexpensive ornamentation with a machine. Handmade embroidery, in turn, is no less popular but more expensive. Native fashion designers do not waste time in vain, and use traditional ornamentation for their collections. They know that the demand for customized embroidered apparel is constantly growing inside and outside the country.