The Best Hotels in Granada for Every Traveller 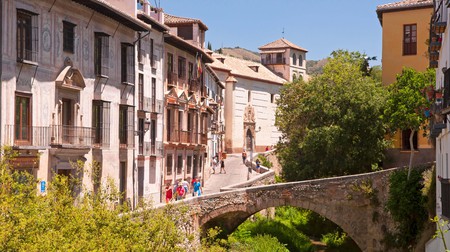 The Andalusian city of Granada, in the south of Spain, should be on every traveller’s bucket list, with its Arab citadel of Alhambra and the Generalife pleasure palace and gardens, as well as its rich gastronomy, with several routes for tapas bar-hopping. Here’s our guide to the best places to stay in this provincial capital. 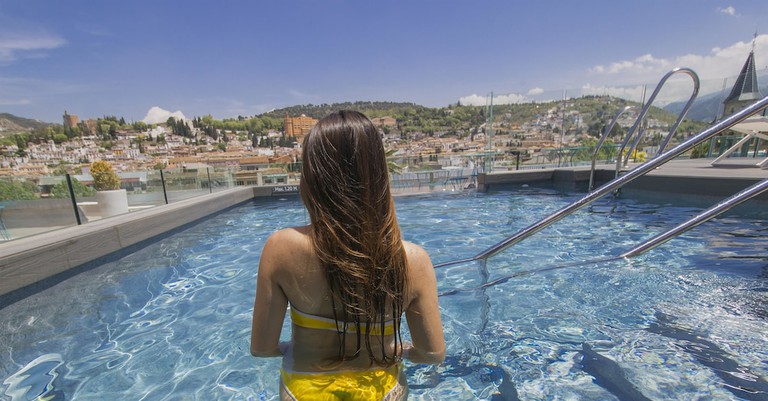 Barceló Carmen Granada Hotel | Courtesy of Barceló Carmen Granada Hotel / Expedia
View Rooms
Located on one of the main central thoroughfares, Barceló Carmen sits in the bustling heart of the city. Guest rooms have all the swish, contemporary feel you’d expect of an upmarket hotel chain, with some upper floors overlooking the Alhambra. But it’s the fabulous rooftop terrace where you’ll find the best views, together with a snazzy pool and bar perfect for sunny summer afternoons.
More info

Vincci Albayzin Hotel | Courtesy of Vincci Albayzin Hotel / Expedia
View Rooms
With soaring Moorish architecture, elegant red brick arches and crystal chandeliers, the grand patio of this hotel makes for a handsome centrepiece. This is where you’ll also find the excellent restaurant, Acequia, a popular dining spot for Granadan gourmands. Arabian motifs continue throughout – subtly so in the smartly neutral finish of the guest rooms – infusing the property with the cultural heritage of the city.
More info 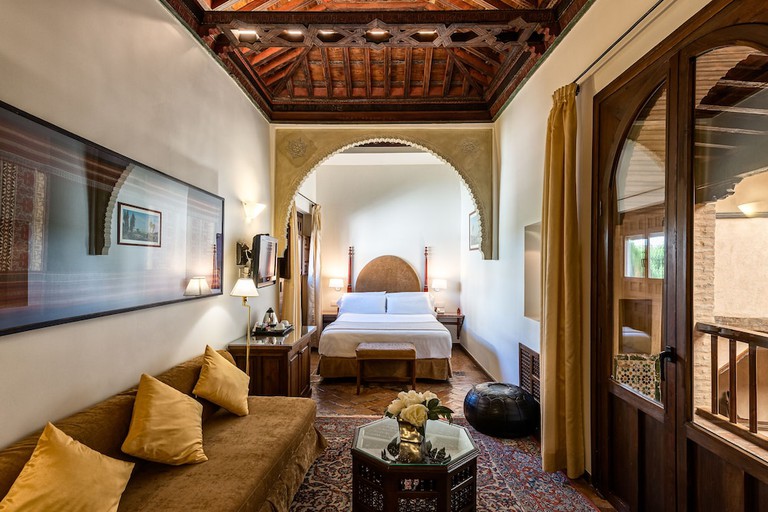 Casa Morisca Hotel | Courtesy of Casa Morisca Hotel / Expedia
View Rooms
When it comes to exhibiting the Moorish past of the city, few hotels can match the splendour of Casa Morisca. Wonderfully restored from the original 15th-century residence, the property combines coffered ceilings, intricate plasterwork and ancient timber to enchanting effect. Guest rooms are equally eye-pleasing, while the setting under the shadow of the mighty Alhambra only adds to the magic.
More info 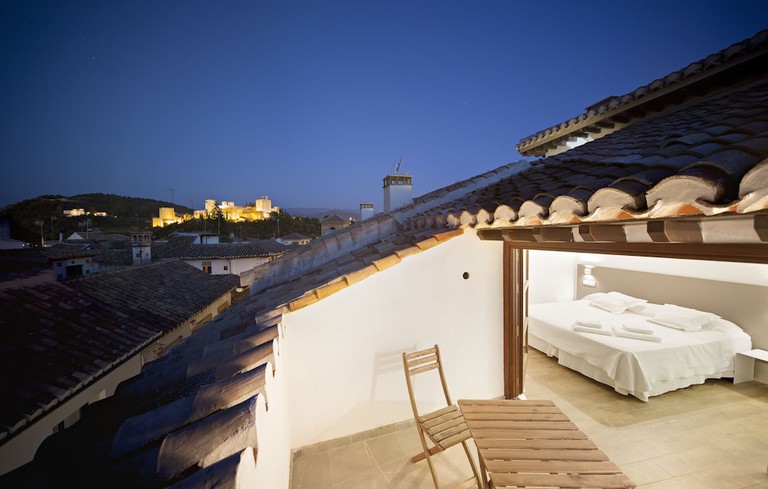 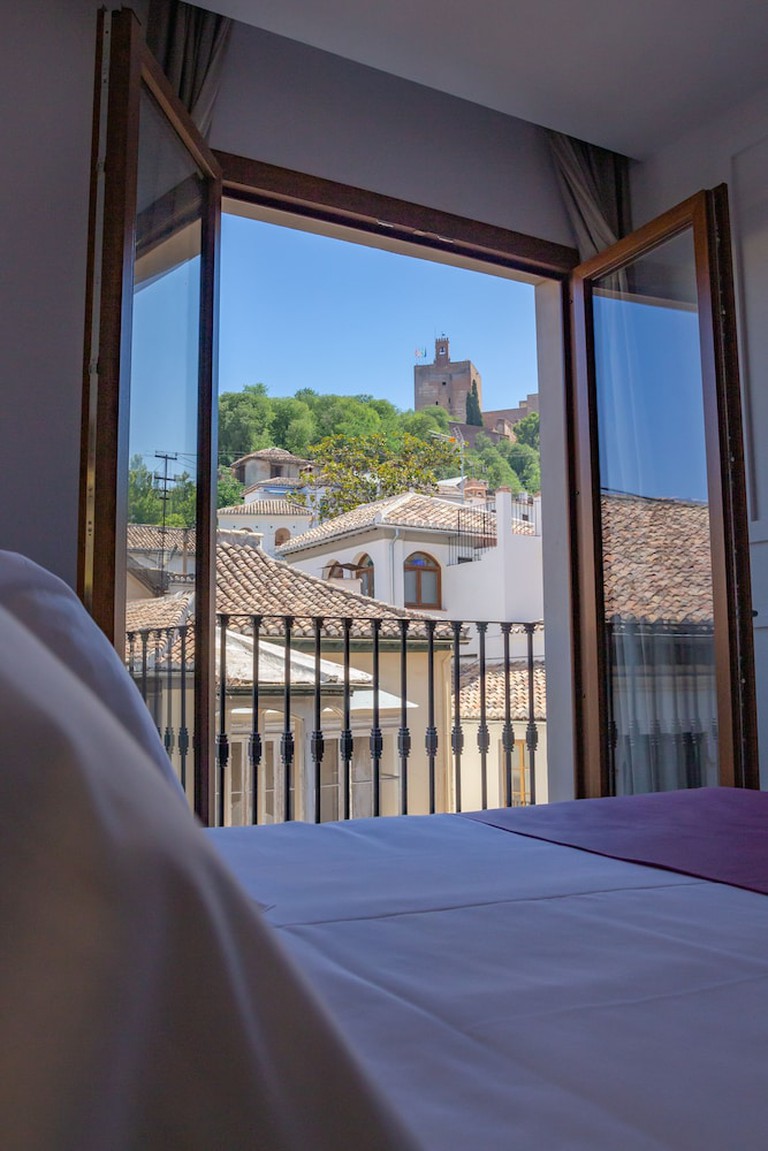 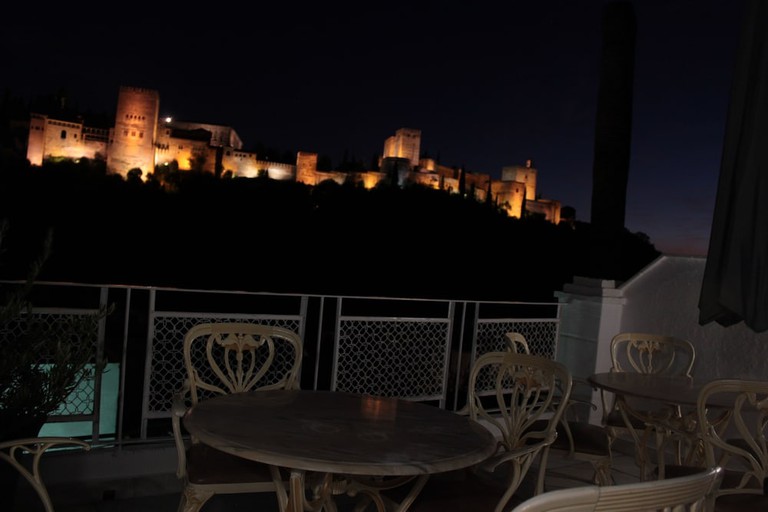 Rosa de Comares | Courtesy of Rosa de Comares / Expedia
View Rooms
Tucked within a narrow lane in the medieval Albaicín neighbourhood, Rosa de Comares will immerse you in the history of the city. The home-style guesthouse is dotted with Moorish decorative touches, together with a fine collection of ornate antiques. Some guest rooms have Alhambra-view balconies, others in-room spa tubs, and one even has a private plunge pool. A shared terrace also offers fabulous panoramic vistas over the Granada roofscape.
More info 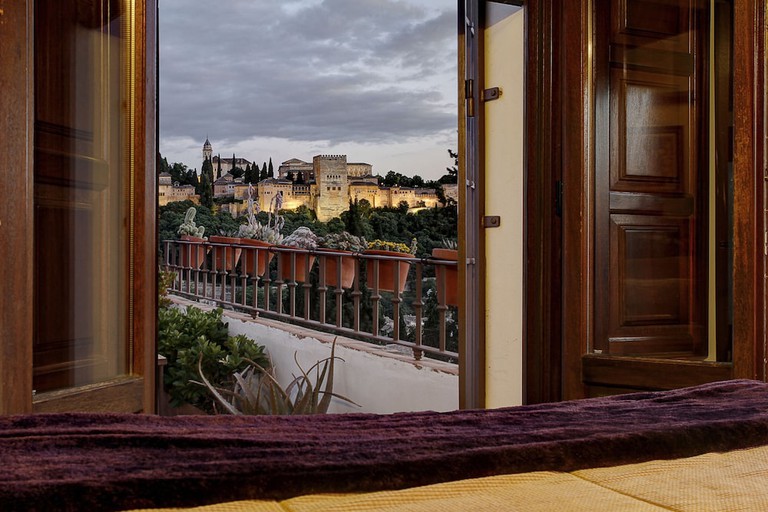 Solar Montes Claros | Courtesy of Solar Montes Claros / Expedia
View Rooms
Geometric tiling, ornate Moorish lanterns and carved wood detailing capture the spirit of the ancient Moorish quarter in which this cosy guesthouse is located. Being perched on the hillside means superb panoramas over the city too, which become particularly magical as night falls. Step out on to your peaceful balcony and breathe in the Alhambra views, before returning to your deep tub for a long soak – candle-lit, of course.
More info 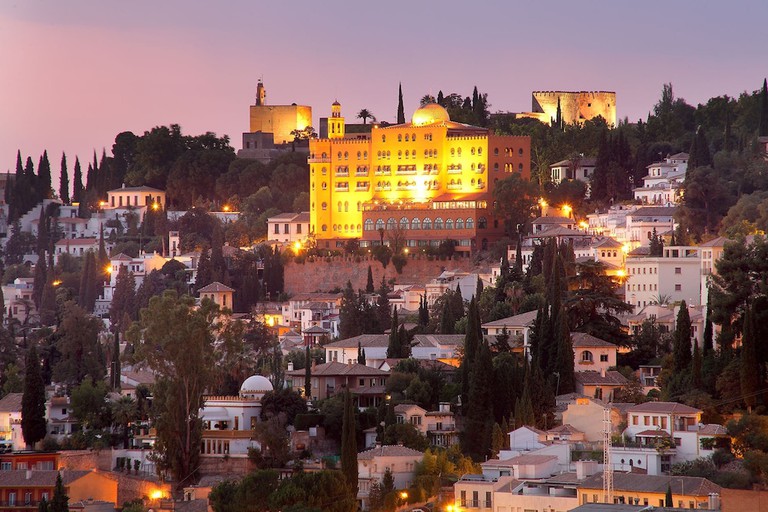 The Alhambra Palace picked up its fifth star last year, making it the oldest five-star hotel in Spain (it opened in 1910). Viewable from far outside the city, it offers luxurious accommodation on the hilltop beside the Alhambra, with many of its 108 suites and rooms boasting spectacular views of Granada. There’s also a smart restaurant, and a bar famed for its cocktails, which can be enjoyed on a terrace with one of the best views in the city. 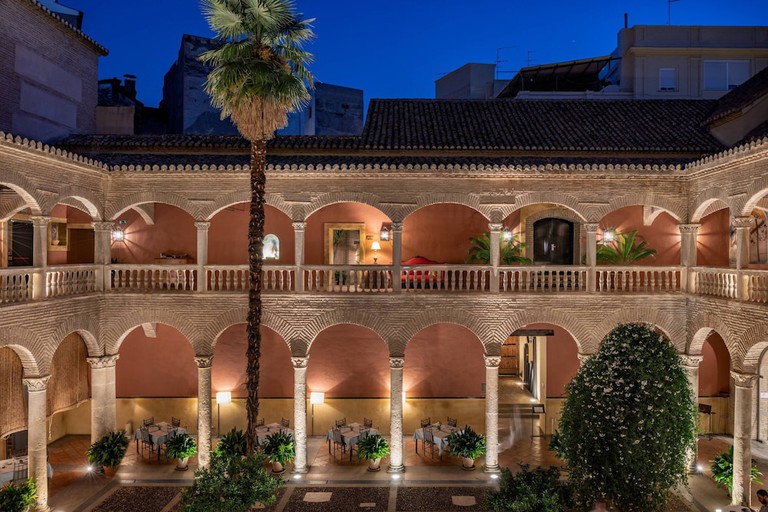 The five-star Hotel Palacio de Santa Paula is housed in a 16th-century convent and 12th-century casa morisca (Moorish house) on the stately thoroughfare of Gran Via. Its 75 rooms – ranging from standard singles to the Bishop’s Suite – are centred around a beautiful internal cloister, some with views onto a 14th-century Moorish patio. The in-house restaurant, El Claustro, is superb, but if you’re heading out, the bars and eateries of central Granada are about a two-minute walk away. 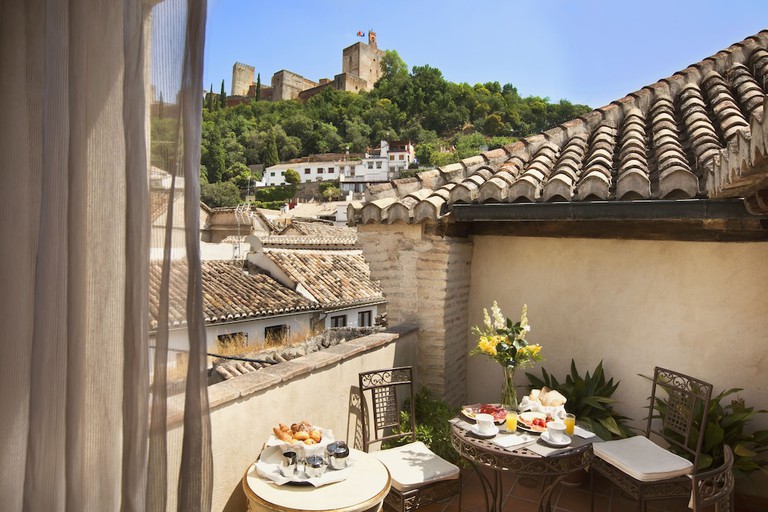 You relax the moment you walk into Hotel Casa 1800, an oasis of calm within a gorgeous 16th-century building. Tucked away on a side-street at the bottom of Albaicin, its 25 rooms ooze period charm, with stone-flagged floors, exquisite wooden furniture and romantic balconies; the Deluxe rooms and the 1800 Suite also boast magnificent views of the Alhambra. A complimentary merienda – the Spanish equivalent of afternoon tea – is available to guests every day. 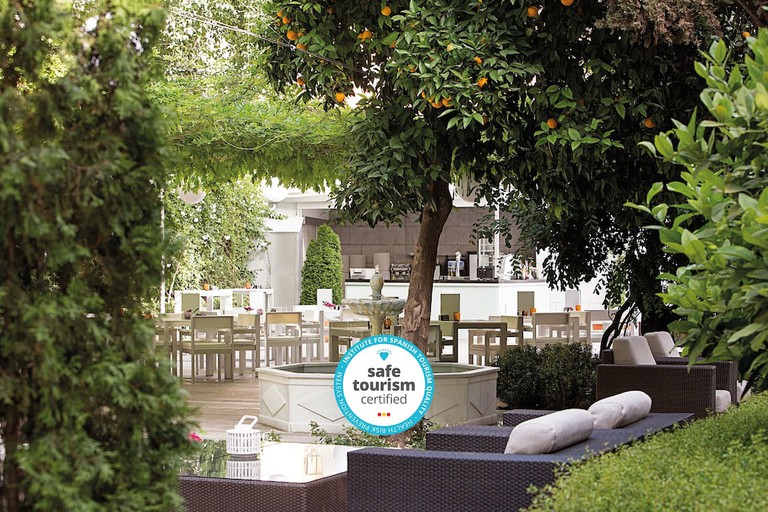 Hospes Palacio de los Patos offers elegant accommodation within walking distance of Granada’s cathedral and shopping district. The rooms are spread between a converted 19th-century palace and a modern building that provides a pleasing contrast to its historical surroundings – you can book them by themselves, or as part of packages such as the Hospes Christmas Experience or the Romantic Getaway. The in-house restaurant has one of the most romantic terraces in the city. 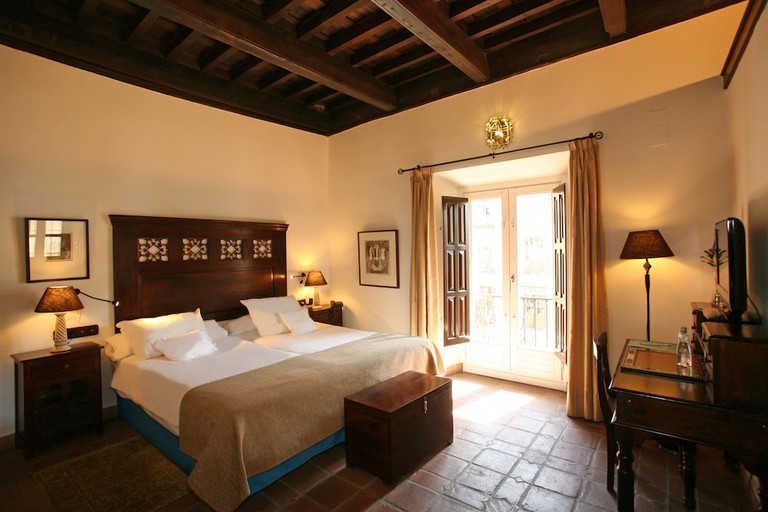 El Ladrón de Agua (which translates as The Water Thief) is a family-run hotel situated on one of the prettiest streets in Granada, at the foot of the Alhambra. It takes its name from a collection of poetry entitled Forgotten Memories of Granada, by the 19th-century Spanish poet Juan Jimenez, and each of its 15 sumptuous bedrooms is themed around a poem from the collection. Guests can choose a book from the well-stocked library and are treated to complimentary wine and tapas early evening. 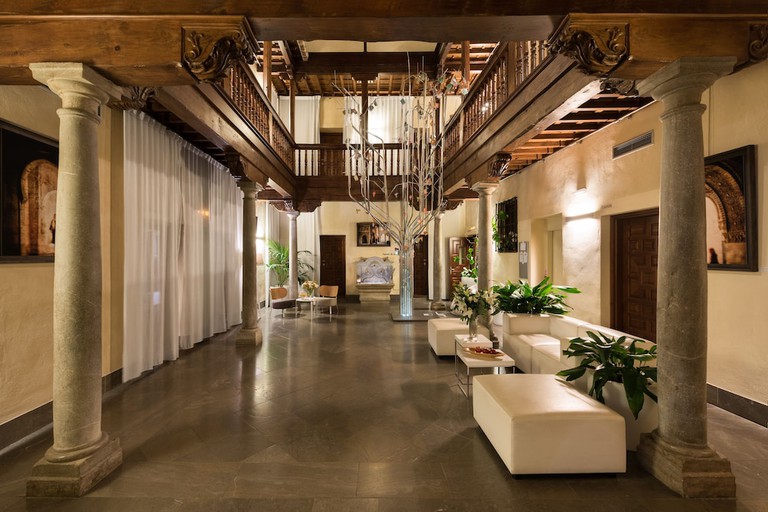 Occupying an understated but beautiful 17th-century palace, Gar Anat is a three-star boutique that calls itself a ‘‘pilgrim’s hotel’’: it was formerly an inn where peregrinos (pilgrims) walking the Santiago de Compostella – via the Andalusian paths known as the Camino Mozarabe – would stay. There are 15 rooms, all with high, oak-beamed ceilings and individually decorated in a classic-meets-modern style. The trendy cocktail bars of Calle San Matias are on your doorstep, too. 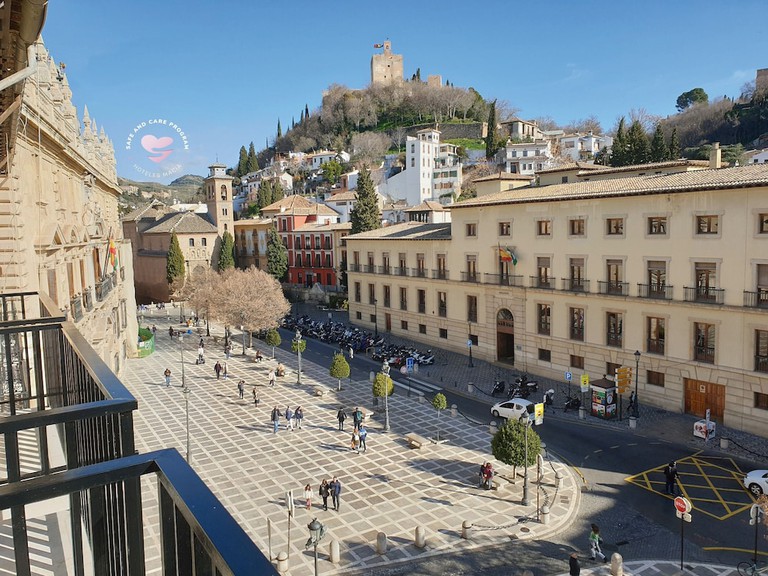 For comfortable budget accommodation in the heart of Granada, Macia Plaza takes some beating. Located on Plaza Nueva, one of the historic centre’s main squares, it’s within a 10-minute walk of the Alhambra (which can be seen from many of the rooms), the cathedral, the old Moorish quarter of Albaicin, and Realejo, the former Jewish district (check out its street art). A buffet breakfast is served every morning and guests have free gym access.