The Outstanding Architectural Gems Of The Canary Islands

The Canary Islands has built itself an image based on beautiful beaches, impressive weather conditions and a friendly atmosphere. What people might not know about this archipelago is that it’s home to some real architectural gems too. The Spanish colonial period brought with it the European Gothic and Neoclassical architecture of the time. Canarian architecture has evolved throughout the years, and today, classic design, modernism and nature blend in harmony on the archipelago. 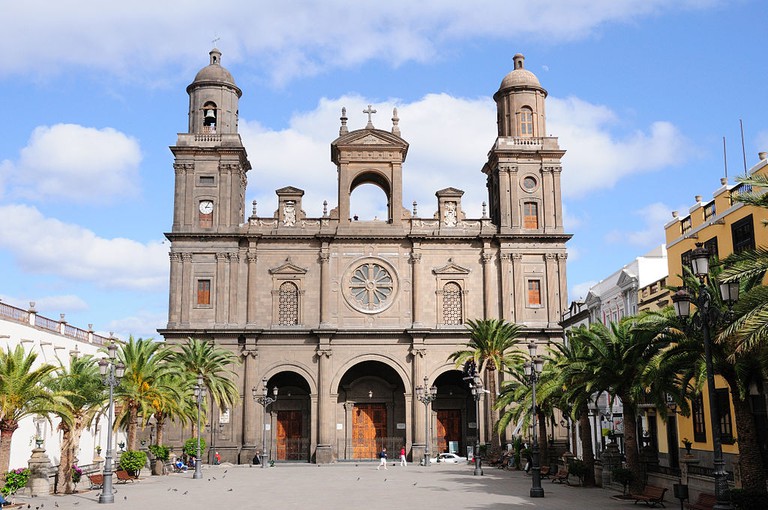 Santa Ana Catedral de Canarias | © Alejandroclemente/WikiCommons
In the heart of the district of Vegueta in the city of Las Palmas of Gran Canaria, the Cathedral of Santa Ana rises up into the sky with a pair of twin towers. This landmark was the first church on the islands after Gran Canaria’s invasion by the Catholic Monarchs in 1478. This impressive building was constructed over four centuries and show signs of Gothic, Renaissance and Neoclassical styles. Don’t miss an opportunity to explore the area, which since 1973 has been declared a Historic and National Artistic site of interest in Spain due to the number of museums preserving and showcasing Canarian culture, such as La Casa-Museo Colón and the Atlantic Center of Modern Arts.
Open In Google Maps
13 Plaza Santa Ana, Las Palmas de Gran Canaria, Canarias, 35001, Spain
+34928331430
Visit Website
Give us feedback

Tilos Bridge is located on the island of La Palma, referred to by locals as ‘La Isla Bonita’ (The Beautiful Island) due to its stunning natural landscapes. What makes this architectural gem particularly remarkable is its breathtaking view, floating like an enigmatic bridge over the Barranco del Agua of La Palma. This feat of engineering is the longest arch bridge ever built in Spain and also the highest. The bridge is 150 meters tall and connects the island to its capital city: Santa Cruz de La Palma. If the word ‘vertigo’ isn’t one that makes you shudder, don’t miss your chance to watch the Atlantic Ocean against the backdrop of the green forest of Tilos! 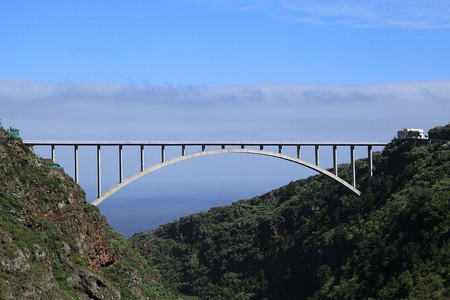 Mirador del Río was designed by the great Canarian artist César Manrique on the island of Lanzarote. The Mirador enables visitors to take in a breathtaking panoramic view of the area from atop the volcanic rocks where this hidden gem is located. Combining the characteristic colors of the island – blue, white and dark grey – this camouflaged space offers truly unforgettable views of the second largest archipelago of The Canary Islands: The Chinijo Archipelago. Between the Cliff of Famara and the chinija (meaning ‘small’ in Canarian dialect) island of La Graciosa, you will find a strip of ocean called ‘El Río’ (the river). Art, design, architecture and nature combine in this truly peaceful place of contemplation. 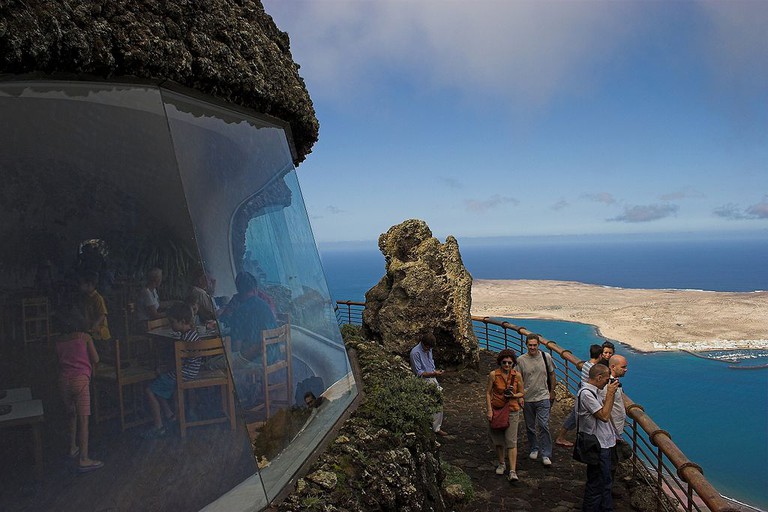 Mirador Del Rio on Lanzarote. La Graciosa can be seen in the background | © afrank99/WikiCommons

The artist César Manrique made Lanzarote his very own canvas and used it to give life to his creativity. Jameos del Agua is just one of many masterpieces made by him. Combining, once again, nature and design, this space is located inside the volcanic tunnel created by the eruption of La Corona Volcano. Watch out for your very special host who lives in the area: the blind albino crabs. The water here is soft given the natural filtration which occurs through the rocks that lay below sea level. After your visit, head upstairs to relax under the blissful palm trees that cover the area. 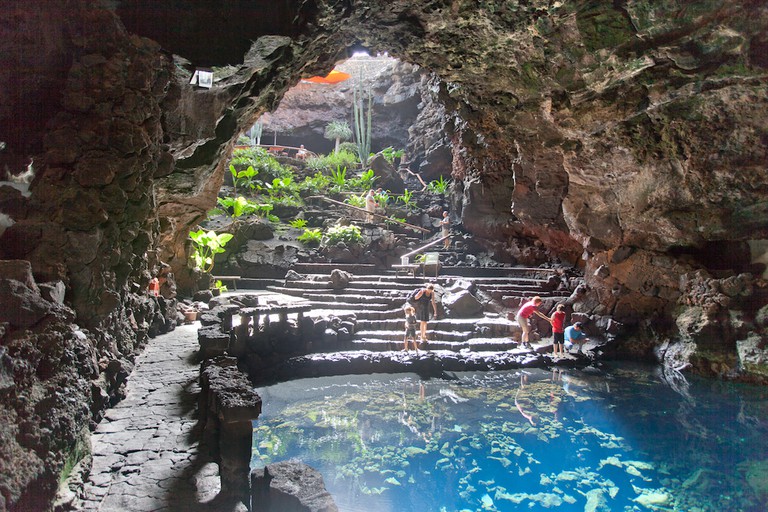 This iconic auditorium was created by Óscar Tusquets as a reminder of the lighthouse which looked out from the beach of Las Canteras of Las Palmas de Gran Canaria. Just like the lighthouse that lit up the horizon at night, this auditorium was inaugurated to commemorate the voice of Spanish tenor Alfredo Kraus who was native to the Canary Islands. On a backdrop of the Atlantic Ocean, this auditorium offers a soul-stirring view of the stage which will make any operatic performance truly unforgettable. 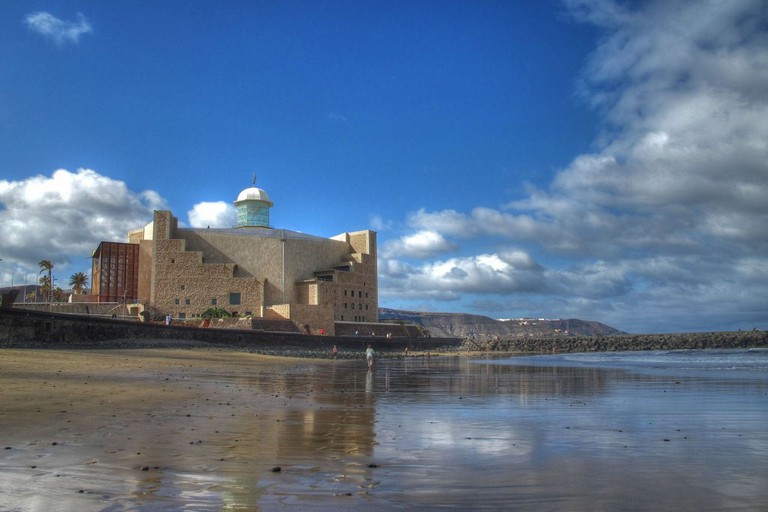 The Basilica of Candelaria (Tenerife)

Building
Facebook
Email
Twitter
Pinterest
Copy link
Share
Map View
The Basilica of Candelaria is located south on the island of Tenerife. This historic monument was designed by the architect Enrique Marrero Regalado in 1959, one of the very locations where a group of guanches, an aboriginal Canarian people who inhabited the island before the Spanish conquest, worshiped an image of the Virgin of Candelaria. The building boasts three naves which are Neoclassical in style and a roof that is reminiscent of the mudejar style of the Moors who remained in Spain after the Reconquista. Pope Clement VIII and Pope Pius IX both proclaimed the Virgin of Candelaria as the patron saint of The Canary Islands. Owing to this, the basilica has become an important place of worship on the 15th of August when the Virgin is celebrated by the locals. When in the area, head to the Plaza de la Patrona de Canarias where a group of nine guanches statues is said to protect the island.
Open In Google Maps
1 Plaza de la Patrona de Canarias, Candelaria, Santa Cruz de Tenerife, 38530, Spain
+34922500100
Give us feedback 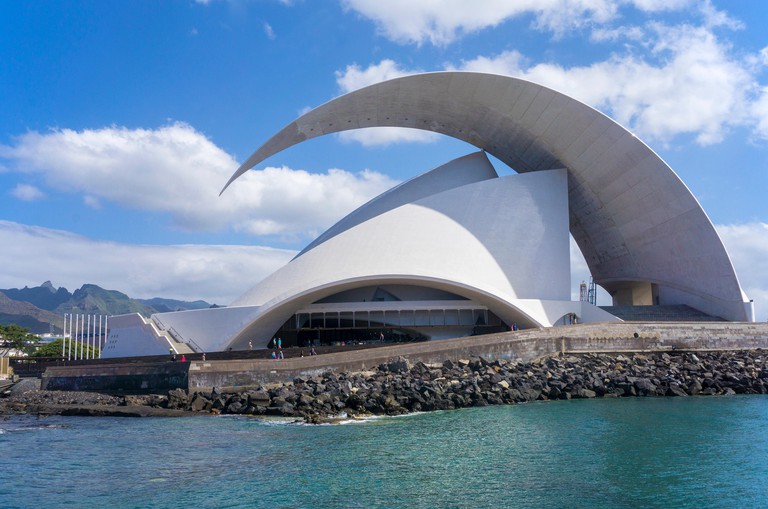 © Helmut Corneli / Alamy Stock Photo
Adán Martín’s Auditorium, known simply as Tenerife’s Auditorium, is an impressive modernist masterpiece created by the controversial architect, Santiago Calatrava Valls. The artist, as per his habit, used the combination of water and white to leave his mark on his creation, as he did with La Ciudad de las Artes y las Ciencias in the Spanish town of Valencia. The elegant wave shape profile set against the backdrop of the sea is in some ways reminiscent of the Sydney Opera House in Australia. Visit Santa Cruz de Tenerife and make your own memory in ‘The Sydney of the Atlantic Ocean.’
Open In Google Maps
1 Av de la Constitucion, Santa Cruz de Tenerife, Canarias, 38003, Spain
+34922568600
Visit Website
Give us feedback

The Church of San Juan Bautista, known locally as the Cathedral of Arucas, located towards the north of the island, is a stunning Neoclassical church with a surprising architectural history: despite its historic style, it was, in fact, constructed in the early 20th century and took less than 70 years to finish. The façade of this awe-inspiring building was made with volcanic dark blue stones from Aruca’s quarry. The current San Juan Bautista Church is located in the same place where another old church was built in 1515. The windows of this church were painted by the hand of the painter Cristóbal Hernández de Quintana, and the sculptor Manuel Ramos left his own mark with a statue of Christ. 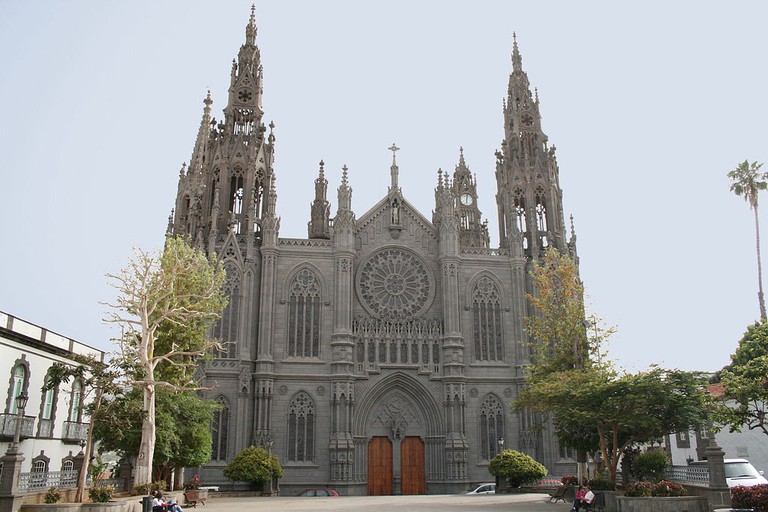 This cathedral is located in the city of La Laguna, which was declared a site of Heritage of Humanity by UNESCO in 1999. This building mixes two architectural styles: Neo-gothic in its main body and Neoclassical on its façade. The façade was also inspired by the iconic Cathedral of Pamplona but adapted using the characteristic colors of Canarian traditional architecture. La Laguna was a glorious example of a non-walled colonialist city which served as a reference for the creation of certain American colonialist cities such as Lima, Cartagena de Indias and Habana Vieja. 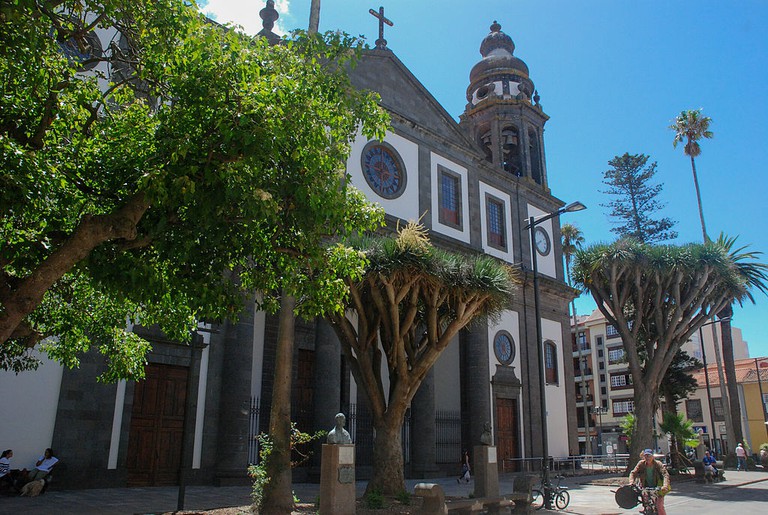