Alba Iulia citadel, Romania | © Remus Pereni/ Flickr
While for many tourists, Transylvania is synonymous with Dracula’s myths and Dracula’s castle, the region has much more to offer. From monumental citadels to bucolic villages to idyllic cities, Transylvania is a fairy-tale land filled with marvellous landscapes. So we made a list of the best places to visit that are not vampire-related.

Cluj-Napoca, the city of youth

European Youth Capital in 2015, Cluj-Napoca is a vivid city mixing Eastern European hospitality with Western European modernity. Filled with creative minds, Cluj-Napoca is nowadays an arts centre, featuring remarkable art projects like the Paintbrush Factory, as well as a city of music and film festivals like the outstanding Transylvania International Film Festival, the exquisite Jazz in the Park Festival or the UNTOLD Festival, winner of the Best Major European Festival award.

Sibiu, a city of romance

One of the most romantic places in Romania, Sibiu boasts a peculiar ambience that makes you fall in love with it immediately. Its cobbled streets, magnificent squares adorned with beautiful Baroque, Renaissance and Gothic buildings, and its picturesque passageways are great for wandering around and capturing marvellous photos. And if you are a museums fan, in Sibiu you can uncover no less than 10 galleries that exhibit the city’s art, history and crafts. 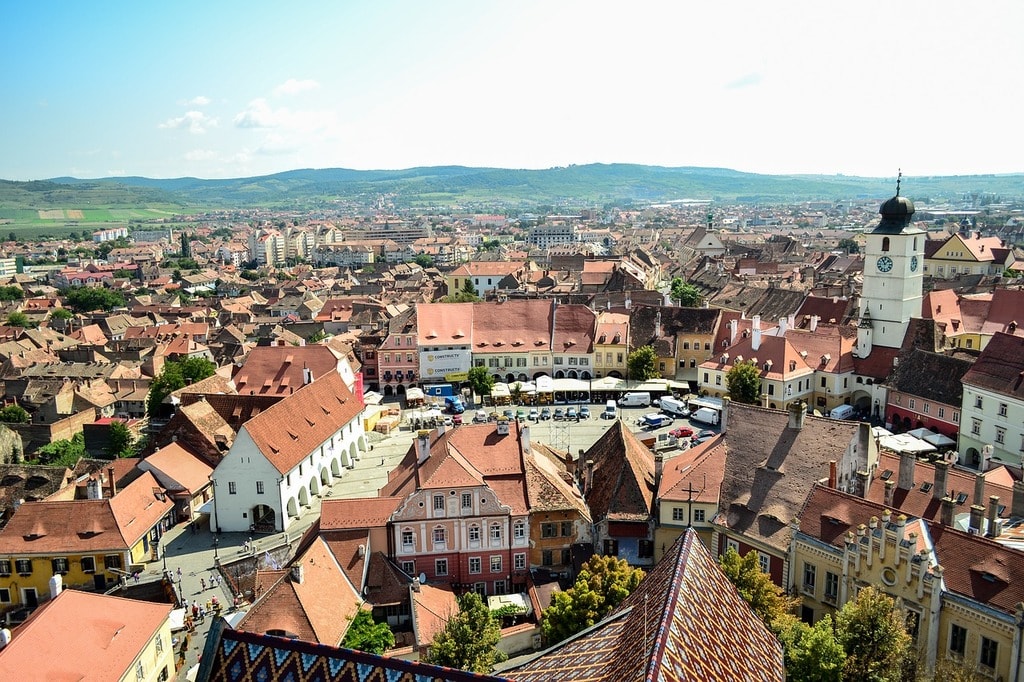 One of Transylvania’s gemstones, Brașov is the ideal city for a weekend escape. Known for its stunning views, fantastic landmarks like the Black Church—the biggest Gothic church between Istanbul and Vienna—or for its monumental citadel, still standing, Brașov boasts a laid-back atmosphere. At just a half-hour by car, you can reach the Carpathians in the Poiana Brașov resort, a great place for skiing, snowboarding, and hiking. 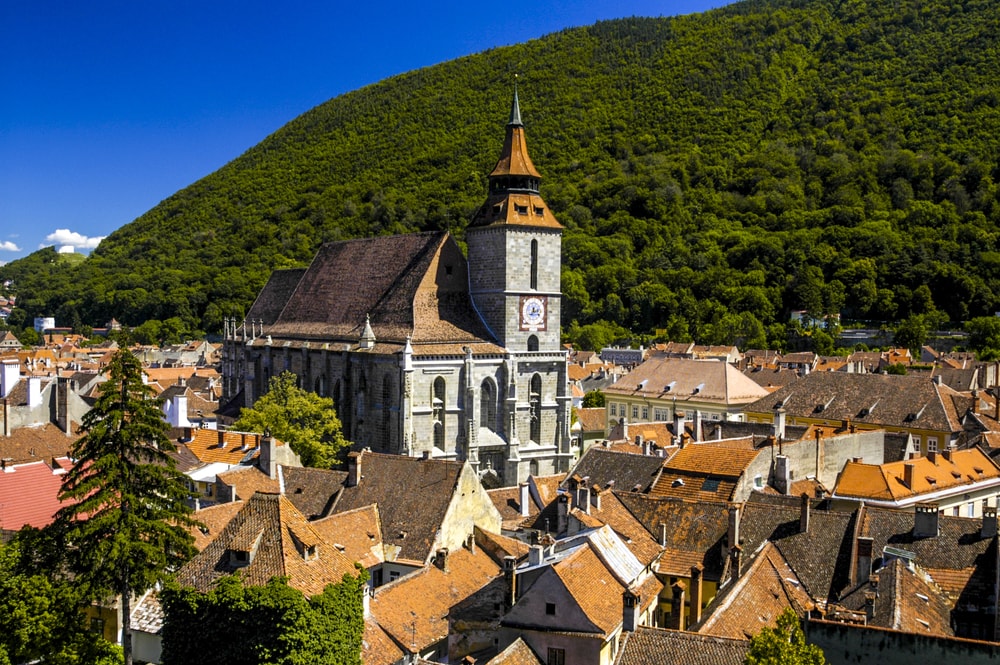 Among Transylvania’s most impressive heritage are the Saxon villages, dotted with impressive fortified churches. One of the most charming is Viscri, a village that has stolen even the heart of The Prince of Wales, who now owns properties in the village that have been converted into guesthouses. A walk in the village will reveal a traditional way of living, beautifully restored Saxon houses as well as a magnificent fortified church. 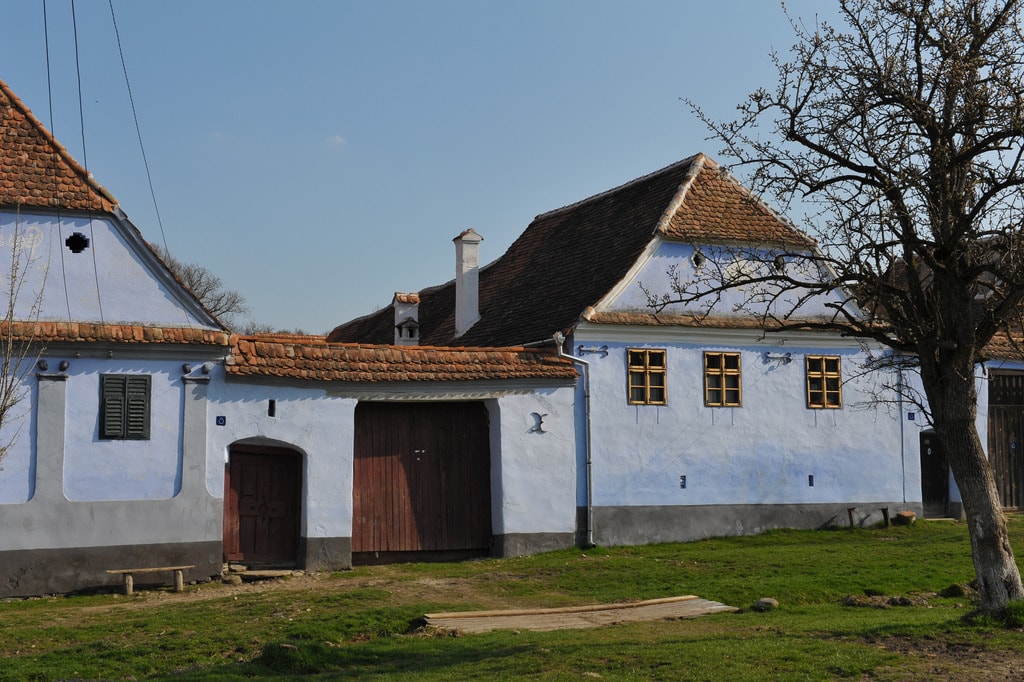 Church
If Viscri is mostly known for its idyllic ambience, Biertan flaunts one of the most splendid fortified churches in Transylvania, featuring a brilliant locking mechanism with 15 bolts that can be simultaneously activated. In the Prison Tower, couples that wanted to divorce were held in a small room for two weeks, sharing everything, in an attempt to get back together. In summer, the village hosts the horror movies festival, Full Moon Festival.
More Info
Open In Google Maps
Biertan, Sibiu, 557045, Romania
+40269868262
View menu
Visit website
Visit Facebook page
Send an Email
Give us feedback

The capital of the ancient Dacian Kingdom, Sarmizegetusa Regia is both a UNESCO Wolrd Heritage Site and a mystical place. Situated at 1,200 meters (3,937 feet) high, dotted with columns, a sundial, and remains of the old fortress, Sarmizegetusa Regia stands as a reminder of the glorious history of the Dacians, Romanians’ ancestors. 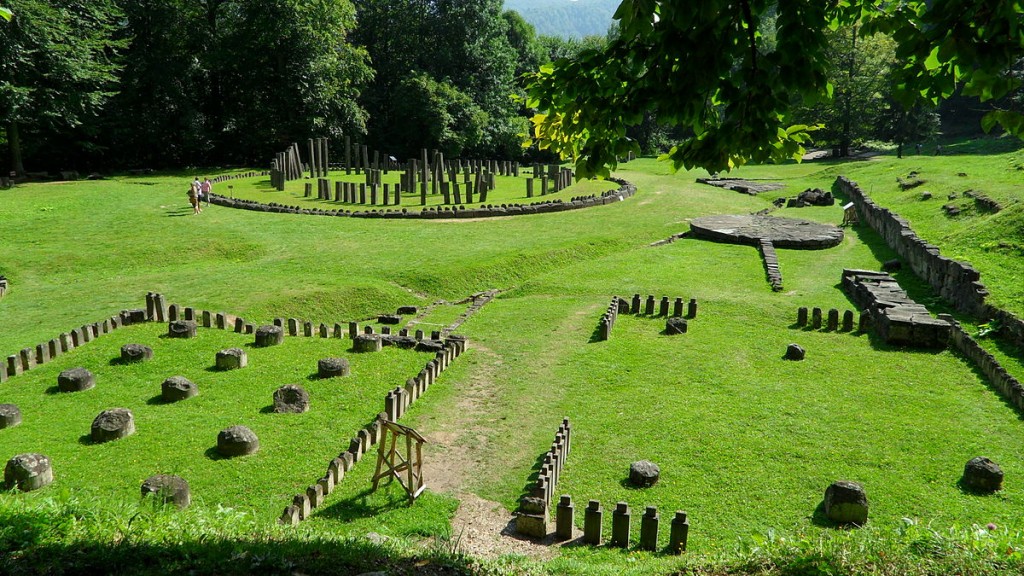 The Clay Castle, a fairy-tale place

A mesmerizing place, the Clay Castle looks like the Romanian-version of the small, peculiar hobbit houses that every fan of The Hobbit would adore seeing. Surrounded by awe-inspiring sceneries, the Clay Castle is a fairy-tale place that lures visitors to capture its magic vibe.

A hikers’ paradise scattered with bucolic villages, narrow canyons, spectacular caves and pristine forests, the Apuseni Mountains are great for all those who like spending time in nature, hiking, climbing, paragliding, or horseback riding. In the Apuseni Mountains, life has another rhythm other than one that flows in sync with nature and its seasons. 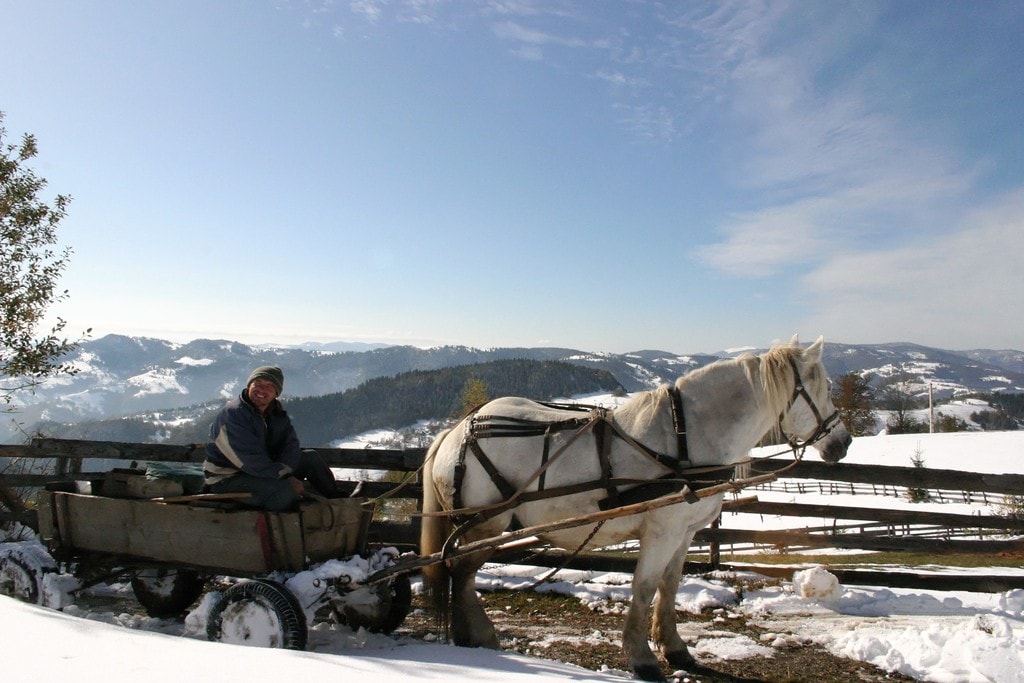 An 18th century star-shaped citadel, the Alba Iulia fortress features astounding Baroque gates and massive bastions, being the biggest of its kind in Romania. The former Austrian citadel shelters a 12th century Romanesque cathedral, a Roman heritage museum, as well as the hall where Transylvania’s union with Romania was declared, and the National Union Museum, considered the spiritual capital of Romania. 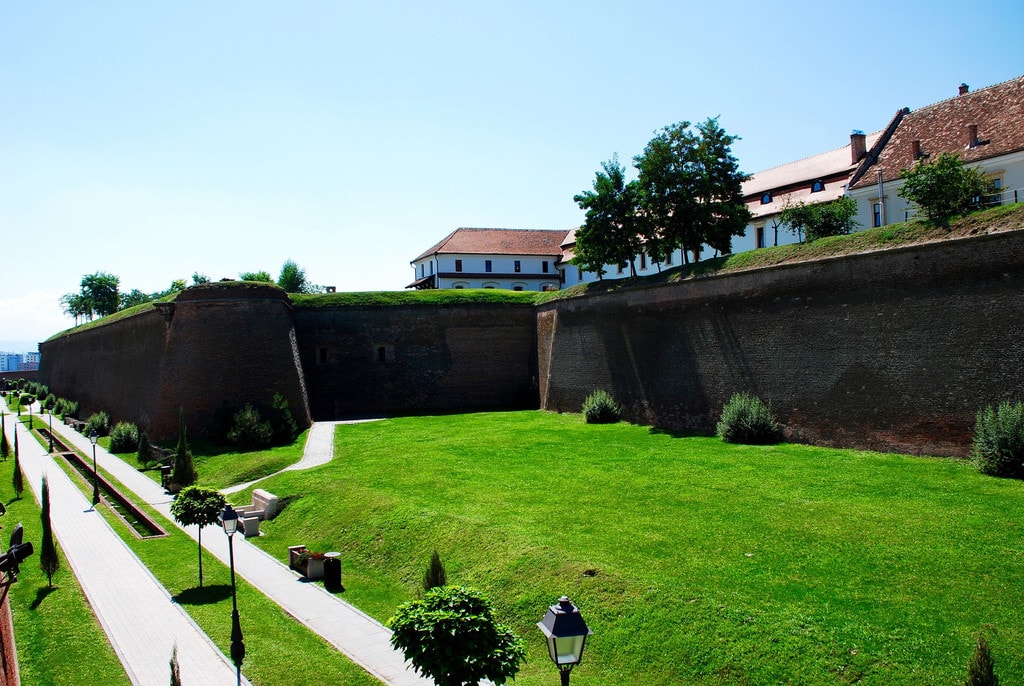 One of Europe’s largest castles, the Corvin Castle in Hunedoara, was erected by one of the most powerful noble families, the Hunyadi family. An iconic building, the castle is set over 7,000 square meters, featuring 42 rooms. Add to that some ghosts and legends, and the castle becomes one of the most haunted places in Romania. 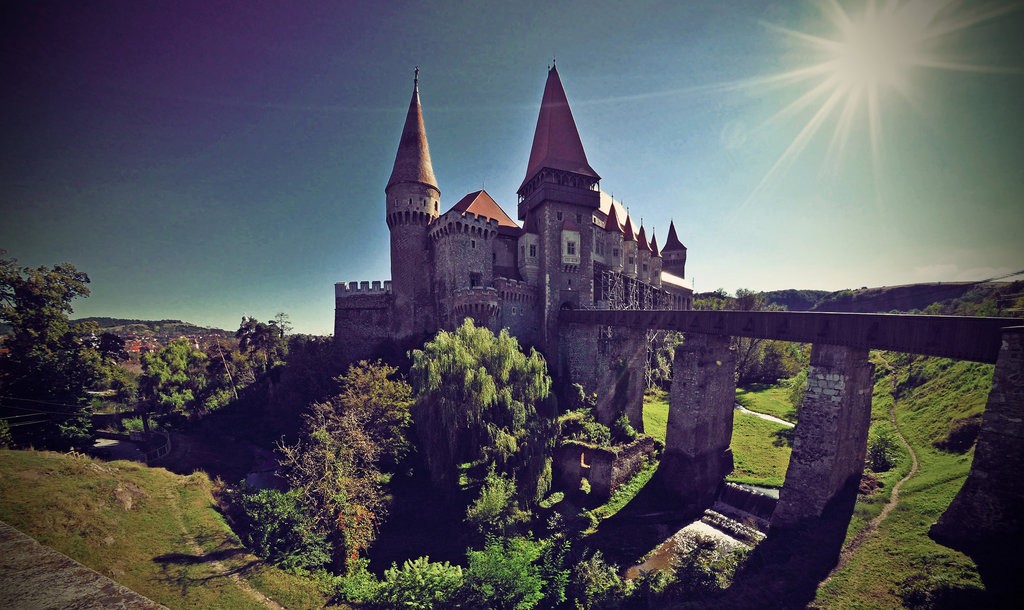 Turda Salt Mine, an underground place filled with wonders

A former pearl of salt-mining in Transylvania, Turda Salt mine is today one of the coolest underground places on Earth. Visitors can travel at 120 meters (400 feet) underground, take a ride on the Ferris wheel, play football or basketball in the underground terrain or take a boat ride on the Ghizela lake. 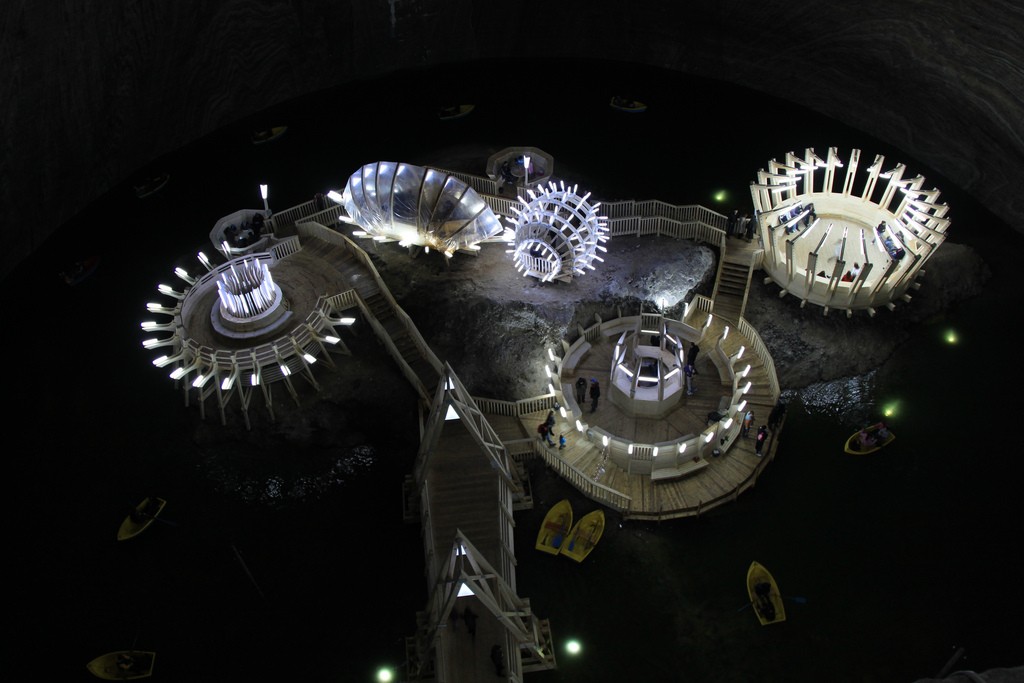