Rome's Best Restaurants, According to the City's Culinary Experts 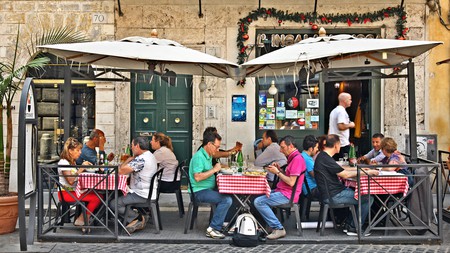 Enjoying incredible food is as much a part of the Roman experience as visiting the Colosseum, but the best restaurants in Rome may be a little bit harder to spot. Avoid the tourist traps, and follow three experts’ advice to make sure you’re dining out on the very best meals in the city.

There are many good restaurants in Rome, but for someone who doesn’t know the city’s dining scene well, it can be hard to tell the real deal apart from the places serving up flavourless, unimpressive versions of Roman cuisine. Here, Roman writer Linda Massi consults three Roman food connoisseurs to show you all the secret spots, hidden between cobblestones and marble statues, where you can find the best food in the city.

Foodies Roma is an Instagram account that counts more than 78k followers and is dedicated to recommending the most delicious restaurants in the city. The owners, who remain anonymous to avoid any bias, started their account after their friends kept bugging them for food recommendations in Rome. “We thought: why not share all the positive experiences we had in different restaurants with even more people? That’s how Foodies Roma was born.”

Nicola Gerundino started as a freelancer for Zero.Eu, which he describes as, “The magazine you should have in your pocket every time you leave the house for everything you’d like to do.” His first piece was about a restaurant next door to his apartment in Rome, so it makes sense now that he’s the editor sharing everything about his hometown – especially the incredible homegrown food.

Chef Luciano Monosilio is known for his carbonara (a typical Roman pasta dish, consisting of eggs, pork cheek, pepper and pecorino cheese) – many believe that he makes the best in the world. He made news when he decided to leave his job at a Michelin-star restaurant to open his own, carbonara-focused number. Now Luciano Cucina Italiana is an expression of the new direction the Italian cuisine is taking, while still being a place Luciano describes as, “Where people that love each other can be one big family under the same roof.”

Three very different experts, 11 incredible restaurants – these are the best restaurants to try in Rome, according to those who know the local dining scene best.

Girasole translates to sunflower, and the image perfectly fits the bucolic vibe of this restaurant. A proper trattoria (a family-owned restaurant), this almost feels like a speakeasy. The coffee house front might fool you into thinking there’s nothing more there, but continue through the restaurant and you’ll discover some truly unique cuisine. Foodies Roma says: “That’s where you can eat one of the best carbonaras in Rome. The dish is abundant… it will blow your mind!” Cheap and deliciously unpretentious, this restaurant is the best way to be thrust into the authentic Roman food scene.

Armando al Pantheon, an almost century-old restaurant run by the Gargioli family, is a top pick from both food critic Gerundino and chef Monosilio. “It’s top-tier Roman cuisine made with dedication and care. Their food still impresses me, and I’m a born-and-raised Roman. Imagine what it could do for a tourist,” says Gerundino. As the name suggests, this is one of the restaurants that crowd the area around the Pantheon, but don’t be fooled by its touristy location: there are many reasons it should stand out to you, and one of them is the coda alla vaccinara. This traditional Roman dish consists of a boiled cow tail served with vegetables and a delicately made sauce, and is one of the restaurant’s top sellers.
Open In Google Maps
31 Salita dei Crescenzi, Roma, Lazio, 186, Italy
+390668803034
Visit Website
Give us feedback

Foodies Roma staff consider this pizza place one of the places travellers can’t miss out on when they visit the city. It may seem a bit out of the city centre, but it’s worth leaving the tourist trail for 180g Pizzeria Romana; not only will it give you the excuse to wander around one of Rome’s more residential neighbourhoods, but it also gives you the chance to try the thin and crunchy crust that made this restaurant famous around the city. It’s traditional enough that Romans will queue for it, but avant-garde enough that you’ll find blueberries offered as a pizza topping. Prices ranging from €4 to €12 (£3.40-£10), meaning this is an incredible budget option for those who wish to experience classic cuisine with a twist.

Restaurant, Italian, $$$
Facebook
Email
Twitter
Pinterest
Copy link
Share
Map View
Chef Monosilio describes Retrobottega as “obviously” one of the best restaurants in Rome, and with one look at their menu, it’s easy to understand why he’s so enthusiastic about it. The two chefs running the restaurant, Giuseppe Lo Iudice e Alessandro Miocchi, buy directly from farmers and fishermen to make sure their clients only get the freshest ingredients. But that’s not all: every Monday, the whole Retrobottega crew goes into the nature of Abruzzo (a region east of Rome) to forage wild herbs, fruit, tubers, lichens and roots to use in their creations. Try the artichoke and marigold dish, or the sweetbread, liquorice and cauliflower appetiser to experience what real wilderness tastes like in the centre of Rome.
Open In Google Maps
4 Via della Stelletta, Roma, Lazio, 186, Italy
+390668136310
Visit Website
Give us feedback

Temakinho is known as the coolest sushi place in Rome – though a little on the pricier side, it’s perfect for a special occasion or unusual event. Even more so as it’s not traditional sushi, but the Brazilian version – expect to find typical sushi pairings, but also plentiful meat and caipirinhas to go with your temaki. With stunning pastel-coloured interiors that will make you feel you’re in a pineapple-flavoured acid dream, and colourful spreads of food, this is a restaurant that offers Instagrammable dishes that don’t compromise on quality or taste. “It was the trailblazer for a style that many are adopting now,” say Foodies Roma, “and we love it!” 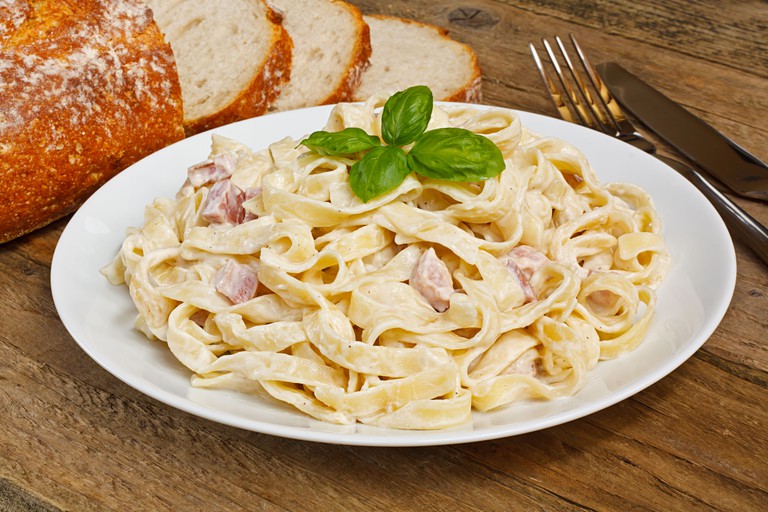 To visitors, it might be unusual to see a simple dishes with a limited number of ingredients in a critically acclaimed restaurant, but that’s exactly what Italian cuisine is: simple, yet mind-blowing. Luciano Cucina Italiana is chef Monosilio’s creation, and it all started because the chef’s carbonara was the most requested dish in the gourmet restaurant where he was working. That’s when he decided to start his own place, focusing on good food and a good atmosphere. Obviously, at Luciano Cucina Italiana the single dish you need to try is the famous carbonara, but the chef also recommends their lamb carpaccio (thinly sliced raw meat), with Roman broccolini, pecorino cheese and seaweed; this dish is a perfect representation of how Luciano Cucina Italiana revisits and expands on traditional Roman flavours.

“In Da Fortunata, we can still find the lady making fresh pasta in front of everyone, basically putting on a real show… we find that really cool!” That’s how the guys from Foodies Roma introduced this traditional Roman restaurant, where pasta is still served in earthenware dishes (designed to keep the dish warm) and where everything is hand-made. This is the place to try the most traditional Roman dishes, like trippa alla romana (Roman-style tripe) or amatriciana pasta, made with tomato sauce, pork cheek and pepper. Da Fortunata is a place where you sit down, order a bottle or two, and fill your belly, so the line can get pretty long – make sure to reserve a table to be certain of being able to enjoy their delectable cuisine. 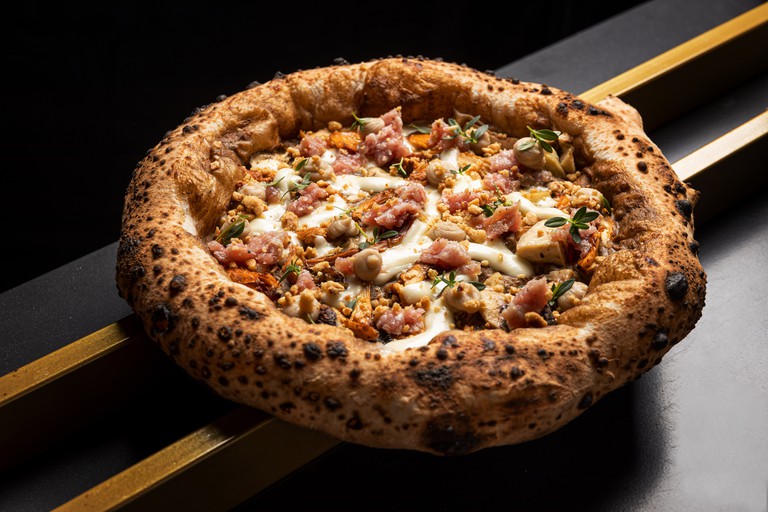 There’s always been a rivalry between Neapolitan and Roman-style pizza. The former is thick and soft; the latter is characterised by a thin and crunchy crust – and they don’t mix. Usually, nor do their fans. Given this, opening a Neapolitan-style pizza place in Rome is already an act of bravery. Turning that into a fancy gourmet number, with marble walls and neon signs, feels like an impossible mission. But Pier Daniele Seu, the chef behind Seu Pizza Illuminati, followed his vision, and it paid off. Don’t get scared by the name: the Illuminati part is meant to reference the enlightenment behind the topping ideas, not any conspiracy theories. Gerundino is a great fan: “Their tartare pizza stood out to me. It’s pretty visionary and incredibly good.” And that’s a fact, not just a theory. 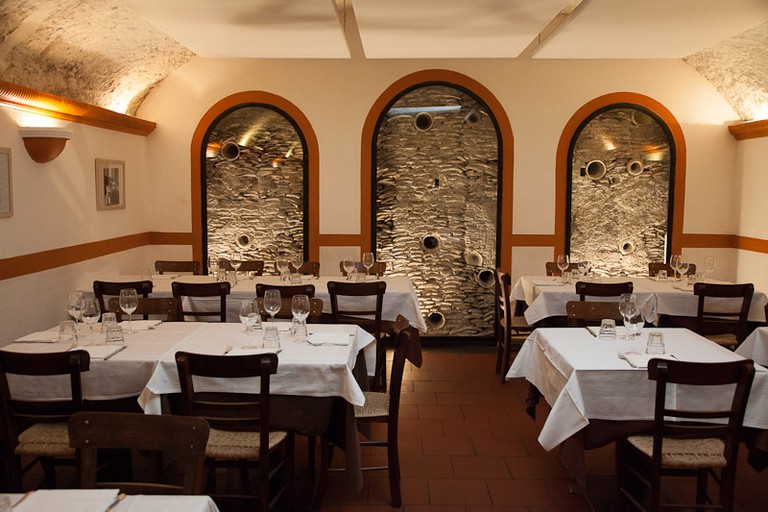 The dining room of Flavio al Velavevodetto showcases the restaurant's history | Courtesy of Flavio al Velavevodetto
Testaccio is the trendy neighbourhood of Rome – it’s where to go to drink, have a bite to eat and mingle with the coolest of the Roman youth. Here you’ll find Flavio al Velavevodetto (literally ‘Flavio at I Told You So’), a traditional Roman restaurant so good it was recommended by all three of the experts. Gerundino describes it as, “The classic example of a place where the chef actually likes to eat and make other people eat, too.” The place feels homey, with stone walls and a beautiful veranda to enjoy during the warmer months, and it seems to be a favourite for the food critics and culinary experts as well as the Instagrammers. Gerundino’s top menu pick pays homage to the tradition of Roman offal: “Their fettuccine with chicken giblets are unmissable.”
Open In Google Maps
97 Via di Monte Testaccio, Roma, Lazio, 153, Italy
+39065744194
Visit Website
Give us feedback 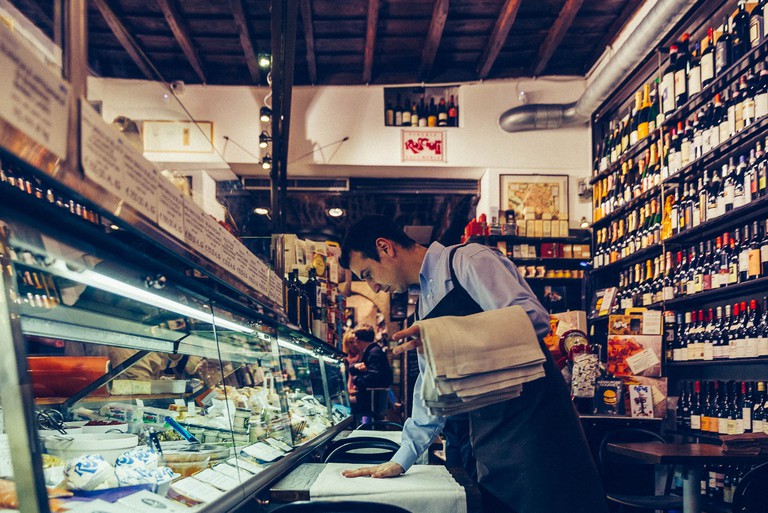 A waiter sets tables for the evening rush at Roscioli | Courtesy of Roscioli Salumeria con Cucina
Roscioli is an interesting concept, as it juxtaposes a typical delicatessen (salumeria in Italian) with a gourmet restaurant, focusing on carefully sought-out ingredients. Doubling as a wine bar, chef Monosilio is a regular: “That’s where you’ll find me if I’m in Rome!” Try the ravioli di coda e pecorino, a complex dish that features homemade ravioli stuffed with cow’s tail and pecorino cheese, served with a slightly spicy foie gras and fig sauce; or indulge in some meat or cheese boards, complete with some of the best charcuterie from all over Europe.
Open In Google Maps
21 Via dei Giubbonari, Roma, Lazio, 186, Italy
+39066875287
Visit Website
Give us feedback

Menabò is a recent opening, but it has already conquered the hearts of many Romans. Its menu is constantly changing and is written on the blackboard in the hall. Gerundino says he loved the duck, which he defines as one of the best dishes he has had in recent months. “Menabò is a perfect example of a new restaurant that keeps the tradition alive with old-school dishes,” says the Zero.Eu editor, alluding to the Camponeschi brothers who opened the restaurant in 2018. Eating at Menabò also means you’ll get the chance to explore the neighbourhood of Centocelle, a residential area that has recently started featuring more and more interesting bars for an after-dinner drink.