How to Make the Most of 48 Hours in Thessaloniki, Greece 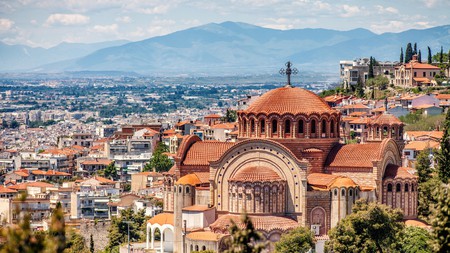 Admired for its laidback vibe and remarkable gastronomy, Thessaloniki is easy to love. Although it’s Greece’s second-largest city, it has a centre that’s surprisingly easy to navigate, making it an ideal destination for a two-day visit.

Thessaloniki has been blessed with a natural port that has made the city an important trade centre for over 2,000 years. Consequently, throughout the history of the Ottoman and Byzantine Empires, Thessaloniki was one of the most vibrant, multi-ethnic and multi-religious trading cities. Spending 48 hours in Thessaloniki will allow you to take in the best of historical attractions and contemporary culture: checking out ancient sites such as the Arch of Galerius, exploring the Photography Museum and discovering Thessaloniki’s buzzing bar scene.

Crowned by the White Tower – the city’s most recognisable landmark – Thessaloniki’s 5km-long waterfront promenade (Nea Paralia) stretches from the Port of Thessaloniki all the way to the distinctive Thessaloniki Concert Hall, made up for the red-brick M1 building and the glass, stone and steel M2. On a clear day, you’ll even be able to look out across the water to see the peaks of Mount Olympus on the horizon.

The area has been recently reconstructed and adorned with parks, galleries, and artificial lakes along the promenade. Although the impressive sculptures of Alexander the Great and the modern ‘Umbrellas’ installation by George Zongolopoulos warrant a visit 365 days a year, the seafront really comes into its own in spring, when the weather gets warmer.

It is worth noting that the museum strip of the city is very close to the coastline, so if you’re so inclined or the weather isn’t conducive to seaside strolling, head to the Archaeological Museum to view an impressive collection of artefacts from the region. If you’re interested in medieval history, the Museum of Byzantine Culture is another must-visit. Also, since you’re in the area, don’t miss a 360-degree view of the city from the top of the White Tower.

The main shopping streets in Thessaloniki are Tsimiski, Proxenou Koromila, and Mitropoleos. They are located a short walk from the museums, so take the opportunity to do some window (or actual) shopping. Tsimiski is the most commercial street, featuring a wide range of international brands, while the other two streets are packed with boutiques and independent craft stores where you can pick up some quirky souvenirs.

A little bit further along, near Aristotelous Square, you’ll find the Kapani food market, which will draw you in with the smell of spices and old-timey atmosphere. Right next to the port passenger terminal, you’ll also find the Photography Museum, frequently featuring exciting exhibitions, and MOMus, Thessaloniki’s Contemporary Art Centre.

After an action-packed morning walking and sightseeing, head for lunch at ERGON Agora for a modern take on Greek cuisine, or try out a traditional gyros sandwich at Giok Balik. For a perfect dessert, make a stop at Choureál to try their profiteroles or Galifianakis for a piece of authentic galaktoboureko (custard pie). Finish off with a coffee at Olympion or Tribeca.

Insider tip: Taxis in Thessaloniki are pretty affordable and can help you maximise your time in the city (rather than navigating the often crowded bus network, which forms the totality of public transport while the metro is being built). Cabs can be hailed on the street or from apps such as Beat.

With more than 80,000 university students, Thessaloniki is one of the most youthful cities in Greece, with near-endless options for nightlife and entertainment. Depending on your taste, you might want to start the night slowly with some raki or tsipouro (local spirits) at one of the artsy bars near the Rotunda (constructed in the early 4th century AD), such as Domino or Belleville Sin Patron. If you want something less bohemian, head out to the waterfront and have a drink at On the Road (near the White Tower) or Kitchen Bar (near the port).

The main hotspots for those who want to party further into the night are concentrated around the area of Ladadika, in the western part of the centre across from the port. You’ll find countless clubs playing Greek folk-pop music, as well as more cosmopolitan options, such as Ypsilon, Fragile and On the Edge. Fast-food restaurants are strategically placed in the area, so don’t worry if you’re peckish. The burger at Laikon is well worth the wait, so be sure to give it a try.

Ano Poli (Upper Town) is the oldest and most picturesque part of Thessaloniki, thanks to the cobblestoned streets and Ottoman-era houses that managed to escape the Great Fire of 1917. Take some time to get lost among the maze-like streets and check out the Heptapyrgion, the Byzantine and Ottoman-era fortress at the top of the hill that served as a prison as recently as the 1970s. In the area, you’ll also find the Vlatadon Monastery, which is the perfect place to enjoy a moment of calm. Atop the Trigonion Tower, you can enjoy amazing views of the city and see what’s left of the original fortifications.

Afternoon – time-travel in the inner city

Stroll slowly downhill from Ano Poli towards the city centre. If you haven’t already, check out the Rotunda, a fourth-century church that was used as a mosque during the Ottoman Empire. A little further down towards the water, you’ll find the Arch of Galerius (Kamara), a triumphal arch built from 298 to 299 AD. Continuing westbound, you’ll stumble upon the Hagia Sophia, one of the largest cathedrals in Greece. The ruins of the Roman Forum, with its amazingly preserved odeon, are also close by. If you’re searching for a place to eat in the area, try Mourga or Django for some authentic Greek cuisine.

If you’re visiting Thessaloniki in the summer, you shouldn’t miss the chance to watch a movie at one of the city’s outdoor cinemas – Apollon open-air cinema and Cine Natalie are two excellent choices, both located close to the Makedonia Palace Hotel and Umbrellas installation. After the screening, sip on cocktails at Efimerida near the YMCA building before sitting down at Clochard by Aristotelous Square for a gourmet dinner in elegant surroundings – sample lamb prosciutto with Cretan cheese, and duck with quince and chestnut.