Despite its renown for the best nightlife in Europe, Berlin’s best venues can sometimes be the most discrete dives and hidden corners, which hide surprisingly unorthodox places. Here are the quirkiest Berlin bars. 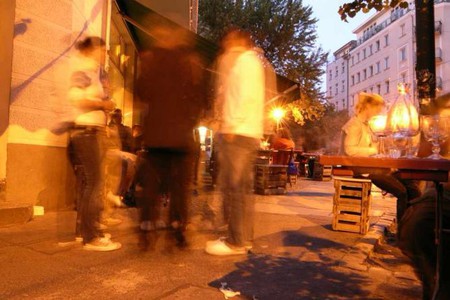 Berlin wouldn’t be Berlin without a venue honoring the existentialist punk culture that shaped the 1980s and 1990s. Panke Culture, tucked away in up-and-coming Wedding, is a labyrinth collection of rooms. These rooms allow it to organize a variety of events, ranging from concerts and exhibitions to talks and film viewings. Describing itself as a support of ‘edgy creativity’, its conscious stance against mainstream culture makes it the meta-hipster venue that all Berlin visitors are looking for. Despite this, it remains a well-kept secret, coveting its authenticity and discretion. It is quickly attracting loyal customers though, as it caters to the most basic needs of Berliner’s life: food, beer, and entertainment. 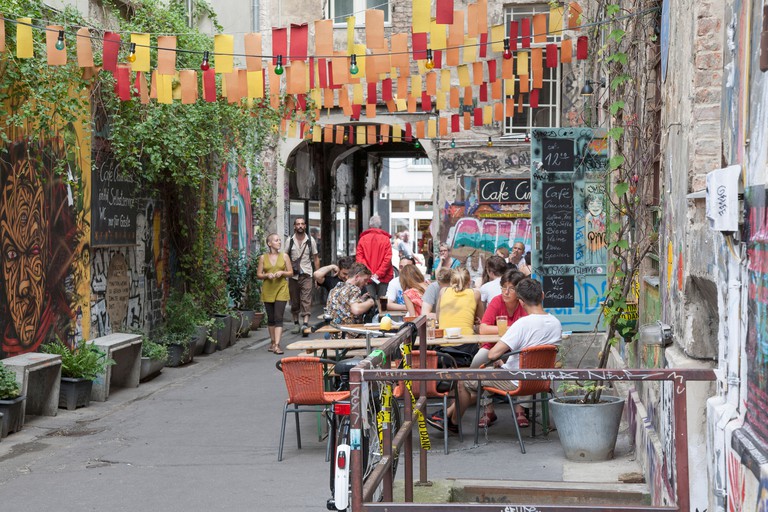 Café Cinema is set beside Hackescher Markt in a vibrant graffiti-filled alleyway | © Kevin George / Alamy Stock Photo
The oldest bar in Hackescher Markt is tucked between an overpriced tapas bar and the entrance to Hackescher Markt’s unbearably posh commercial arcade. This bar is as quirky as it gets. Apparently caught in a temporal standstill in the late 1980s nostalgia for the golden age of cinema, its walls are decorated with sepia colored posters and photos of the many recurrent nights spent at the bar. The front window is the only light that seeps into the long room, from which you can watch tourists passing by the large glass window. Try their ‘Kaffee und Kuchen’, serving cakes of the day and strong filter coffee.

The story of this discrete organization captures both the reason we love Berlin and the reason it will be our perdition. These three bars are announced by the multitude standing in front of them, usually holding glasses of wine. The policy after 8pm is that you pay a donation for refills, and on condition that you can find a glass, the wine is served until there aren’t any bottles left. Essentially, the customer pays what they can afford and think the drink was worth. The naivety of the business plan is precisely the key to its success. Only a few years after its inception, the owners now have three local bars around Prenzlauerberg, serving wine and food with this voluntary payment structure. They even offer wine seminars. Die Weinerei is a friendly establishment that can teach many valuable lessons about wine and trust.

We might try to avoid it, or deny it, but it is unavoidably true: Berlin’s specialty is its trustworthy ‘Spätis’, open late at night and festive days. They inevitably resolve all our essential problems; from sorting out food for Sundays to getting you your Wegbier on a Saturday night. Some remain modest in their selection, offering beer, tobacco, chewing gum, and sweets. Others have upgraded and tuned their spaces to include tables and sitting spaces, bakeries, freshly made tea and even strobe lights. We recommend International on Weserstraße 190, which includes a second room with a pool table and spaces to sit down to consider your strategic next move… Even Der Spiegel has felt the need to report about it, validating the phenomenon that we all appreciate. 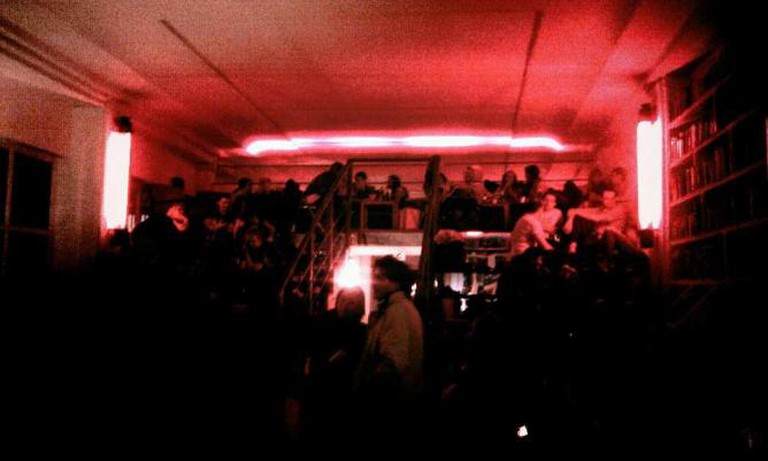 Mein Haus am See | © Igor Schwarzmann/Flickr
‘It’s not a bar, it’s not a club, it’s something sexier in between…’ claims its blogspot page, including a criminal amount of ellipses at the end of the sentence. Its description is accurate, Mein Haus am See is as advertised, a vague something with loud music, attracting many expats and new arrivals looking to start out their night in the raving city. But the venue is quirky for its setup. The bar elevates itself through a series of steps, which climb the far wall, much like a roman amphitheater, functioning alternatively as tables and seats. Capturing the essence of Berlin’s culture of ‘seeing and being seen’, expect to hear Dirty Doering, Nicolas Jaar and Bar25 sets. They are played loudly throughout the night, tricking you into going to Katerblau even though you are working tomorrow. It also has great mojitos and varied classic cocktails, which we highly recommend despite their somewhat costly fare.

For those having experienced Budapests’ Szimpla, and familiar with the more local version on Boxhagener platz, this will be a familiar if not well-known name. It is quickly becoming an institution for live music, offering an original selection of musicians, which alternate between synth-pop, rock, flamenco, or even Gypsy wedding music. Badehaus Szimpla‘s musicians are mostly identifiable for their originality. When there is no live concert on, the venue is known for its Hungarian beats, cheap drinks and good vibes. It always promises a fun night. 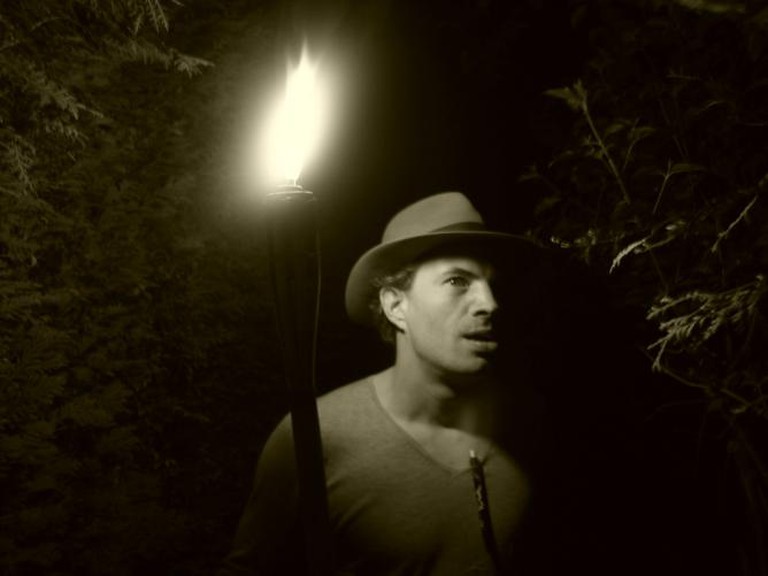 Im Dschungel Neuköllns | © stoeren ungeheuer/Flickr
Dschungel, i.e. jungle, is nestled in the most sought after district of Berlin, Reuterkiez. Its dusty windows seep a translucent light from the outside that, to the unknowing passerby, seems to illuminate a chimpanzees’ cage. But risking a look inside allows entry into a film-lover’s dream, described by its owner as aspiring to a Vodoo-vibe. This is certainly attained by the drooping leaves and dark ivy. The bar promises atmospheric drinks and psychedelic nights.

We are all familiar with the history of East Berlin, but most of us can only imagine what it was like. Die Tagung, a last remaining corner stone of the Ozzi spirit, is faithful to its commie history; from the wallpaper to the sofas and lights, they are all sourced from the former DDR. It is renowned for its cheap prices and discrete clients, isolated from the over-hype of hipster district of F’hain. This is all tied together by the somewhat aged smell of dry paper and tobacco, and the dimly lit, narrow spaces. 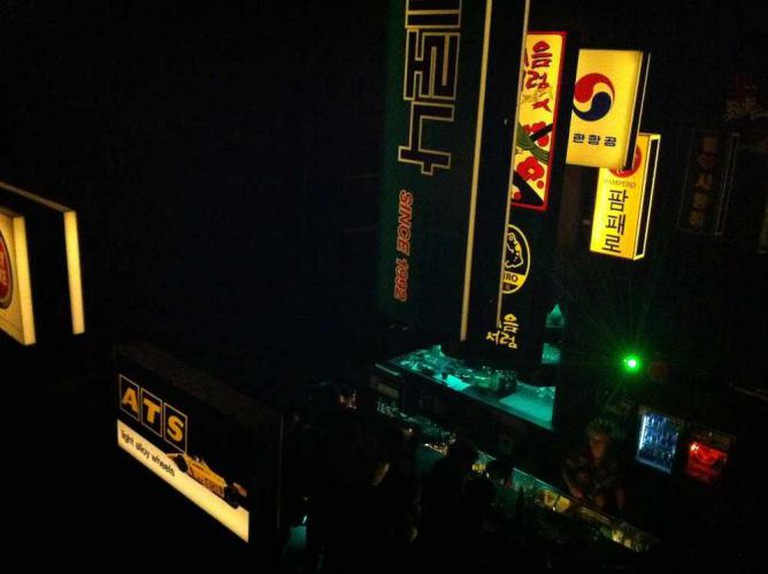 Soju bar | © Tim Lucas/Flickr
We can’t be blamed for thinking that the essence of a country’s quirkiness lies in its alcohol. This seemingly normal Korean barbecue restaurant has a specialty selection of alcohol, served traditionally. Served here is everything from fermented sweet potato to rice wine and aloe vera juice (for the prudent ones). Juki’s friendly atmosphere brings you to exotic places and, after a few shots, you might even believe that you are not in the German capital but in a sleek joint on Seoul. The good news is that you can always reconnect to reality by sobering up with some delicious Korean barbecue.

Syndikat is a collectively run anti-establishment dive bar, renowned for its loyal crowd of anarchists and other anti-systemic citizens. This place is also known for its continued intellectual activity in the field of bier revolutionaries, and its hospitable policy of inclusion and discussion. It is so underground there are no available pictures on the web. It is quirky in decoration but especially in authenticity, as it is honest in its meaning to offer a discussion forum for all leftist ideas. Although they are tolerant of drunken behavior, it is to be avoided if alcohol brings out a closeted neo-liberalist.