What to Eat and Drink at Cologne's Christmas Markets 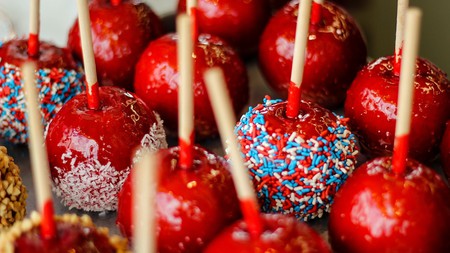 One thing should be said in advance: German Christmas markets are not the place to count calories. Instead, it’s a great excuse to embrace sugary and greasy treats and indulge. Here are 11 yummy foods and drinks to try when you’re in Cologne during the Christmas holidays.

Reibekuchen, the German potato pancakes, are a staple food in Cologne’s traditional brew houses and are not to be missed at a Christmas market. Grated potatoes and onions are mixed with eggs, flour and salt and then fried in oil. You can order them plain, but they’re best with a dab of applesauce.

Mulled wine is at the centre of a trip to a Christmas market in Germany. Traditionally, red wine is enriched with fresh orange slices, cinnamon, cardamom and Chinese anise, but hot white wine is becoming increasingly popular. Either way, a mug of Glühwein will keep you warm and put you in the Christmas mood. 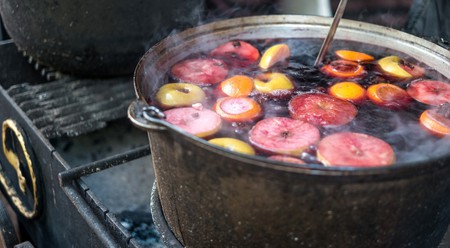 If you’re stuffed to the gills with Bratwurst and Reibekuchen, but you’re craving something sweet, head to one of the wooden huts that sell all kinds of nuts and delicious treats, and pick up a bag of roasted and caramelised almonds. 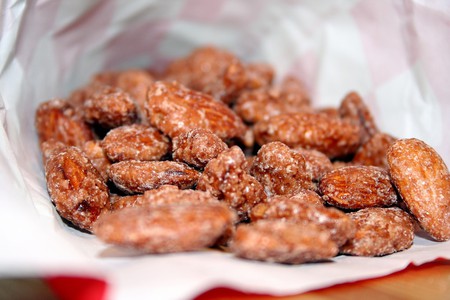 If Germans know one thing about food, it’s how to make good a good sausage. Regional varieties of the German Bratwurst differ in the meats and spices used, length and texture but are all praised for being tasty. There’s plenty of hot dog options available on Cologne’s Christmas market, traditionally served on white bread with mustard and ketchup.

The apples on a stick are quite the eye-catcher and a Christmas season favourite. They are either coated in chocolate or glazed with red-coloured sugar. More creative varieties are additionally dipped in chopped nuts or dragées for some extra sweetness.

You either love it or hate it. Essentially, Eierpunsch is a hot and Christmassy version of eggnog – which doesn’t rate every person as a fan either. The liqueur is mixed with white wine, orange juice and a bit of sugar, heated and then served with whipped cream on top.

If you’re feeling peckish but don’t want the sugar rush, a bag of roasted chestnuts is a great compromise. They might even be the healthiest snack you will find. Vendors are usually scattered across the Christmas market and will make a fresh batch for you. 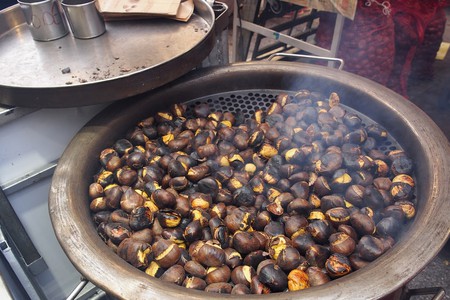 Who doesn’t like hot chocolate? It’s the obvious choice for kids and those who don’t want to booze up on Glühwein. That being said, you can get hot chocolate with a shot of rum – just look for Lumumba. That sure will keep you warm.

The best thing about French crêpes is that they can be breakfast, lunch, dinner and dessert. Stalls at Cologne’s Christmas markets sell yummy sweet crêpes topped with Nutella, cinnamon, lemon and sugar and more, and the savoury ones with cheese and ham or spinach and feta cheese. 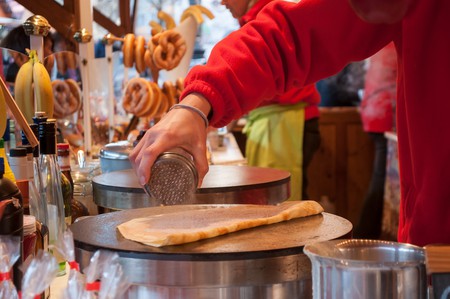 English visitors will be happy to find a familiar dish on Cologne’s Christmas markets, though the taste might be slightly different. Germans rarely sprinkle their battered and fried cod with vinegar, but instead add a bit of remoulade sauce.

Christmas market waffles come in the shape of hearts or typically Belgian as thick squares. The light version is topped with icing sugar but if you want to go all out, order them with whipped cream and hot cherries. Yum! 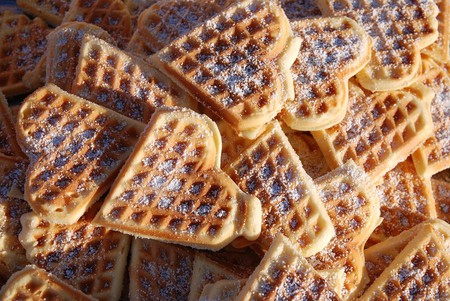