The Top 10 Things To Do and See in Düsseldorf

The capital of North Rhine-Westphalia, Düsseldorf is a destination for artistic souls and major businesses alike. Part of the Rhine-Ruhr conurbation, which includes both Cologne and Bonn, it’s a place that’s bloomed with culture over the years, offering a distinctive character and a wide range of activities. 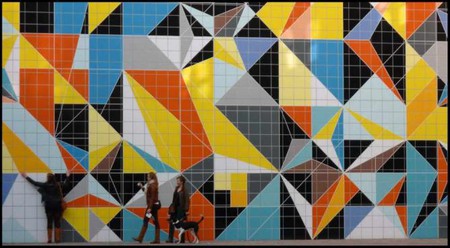 The best way to start a trip in Düsseldorf is to explore the beautiful Altstadt (Old Town), which is located right on the edge of the Rhine. Start with a walk through the Hofgarten, a central park that dates from the 1600s. Then, why not hit the Jägerhof Castle and the Goethe Museum for some cultural indulgence, or emerge onto the grand Marktplatz, where traditional Germanic architecture can be seen in buildings like the City Hall and Treasury?

A little to the west of the Old Town and also located on the Rhine banks, the Burgplatz awaits. Awarded with the distinction of being one of the most beautiful post-WWII places in Germany, it used to host a mighty fortress that belonged to the counts of Berg. Today the remains of old military defense towers can be admired here, while a visit to the Marine Museum is a real eye-opener. 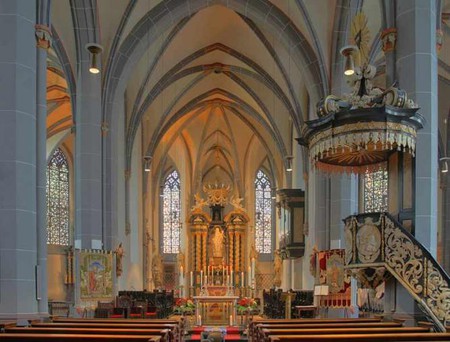 Undoubtedly one of the most important landmarks in Düsseldorf, the Basilica St. Lambertus is the oldest building in the core area of the city, dating from the Romanesque period, around 1209. In the middle ages, it was the only church and parish in town, encompassing a slender tower covered by simple red brick, spectacular windows with large panes and a series of gorgeous interior Gothic arches, adorned with stained glass and filigrees. 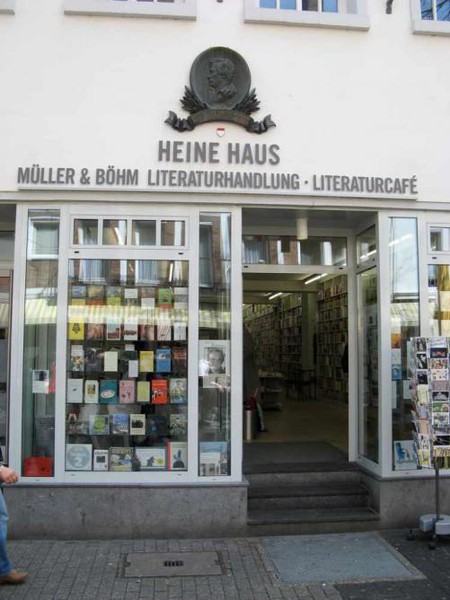 A great choice for those in search of the perfect balance between fine coffee, quiet bookstore, and historical interest, Heine House represents the birthplace of the German Heinrich Heine, a writer and journalist of the 19th century who is considered one of the last Romantic poets. Nowadays the building is also a successful cafe, distinguished with a memorial plaque and oodles of great literature.

An astonishing compendium of artistic movements from the last century, Kunstsammlung is a real highlight of the city. It is a relatively young museum, dating from the 1960s when it first began acquiring works by the famous Swiss artist Paul Klee. Today, the Kunstsammlung contains three main houses: K20; K21 and the Schmella Haus-F3. Together, these take visitors through an extraordinary experience of 20th and 21st-century art; through Dadaism, surrealism, cubism , expressionism and pop-culture to name just a few. Some of the names featured include Henry Matisse, Pablo Picasso, Andy Warhol and Wassily Kandinsky.

Among the most colorful contemporary architecture in town, Mediahafen (or as it’s popularly known, Colorium) is a spectacular explosion of rainbow-like colors, all spread out along 2,200 glass panels and one looming, 62-meter-high skyscraper. The 17-storey building was constructed with hybrid functions in mind, mixing office and residential spaces, along with one breath-taking panoramic from the rooftop. The project was part of the regeneration of the post-industrial neighborhood area in the 2000s, and today is part of the city’s booming business and technology hub.

The home of the city’s famous pils – Gulasch Alt – serves up its trademark brew to locals and travelers alike; a potent beer with a distinctive reddish brown color and a powerful malty smell, complete with overtones of grapefruit and pineapple. The brewery has been making its delicious staple since 2011, using the height of modern equipment right throughout the fermentation process. However, the tradition of Gulasch Alt is ancient. The dark color comes from a higher proportion of malts and, unlike other bottom-fermented beers, the period of time it takes to brew is longer. 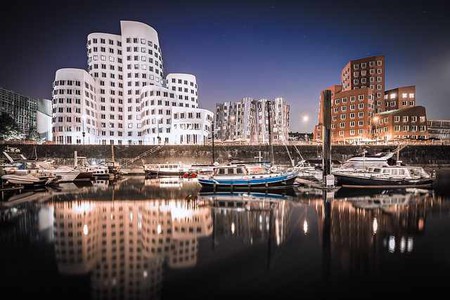 Also going by the name of Zahllhof or the Gehry Building, The Rheinhafen is an all-in-one media and artistic center spread out over a complex of three main buildings. It was designed by Frank O. Gehry, a world renown American architect known for his visionary works. Spot his distinctive characteristics in the inclined towers and the curvature of the structures, and in the curious choice of materials used in their construction. In short, this media complex is one of the post-modern symbols of Düsseldorf; an aspirational icon on its skyline and a landmark of contemporary architecture in Germany. 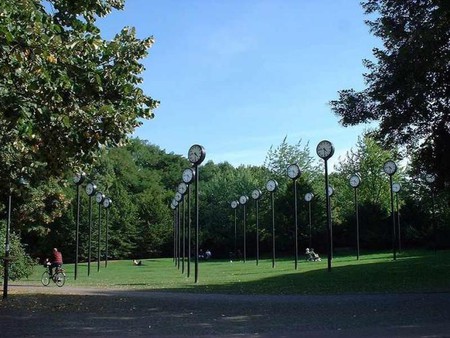 Mysterious and fascinating, the iconic clocks in this park are of the psychedelic type to transport visitors to Alice’s Wonderland. The lines of antique clocks spread over the lawns here are intended to give the impression of a multitude of parallel timelines, while the surrounding area of the Volkspark is a charming place to come and relax in the summer.

The ‘Flossis’ is an art installation made up of 29 sculptures, all vividly colored and found climbing over the Roggendorf-Haus in an attempt to adorn the brutalist gray and red-brick of the building with a burst of creativity. Colors like green, yellow, red and blue shade the sculptures, each of which has oversized hands and feet. The artist, Rosalie, is a native German with an insatiable passion for color, who has established herself as a renowned object maker, as well as being a painter, stage designer, and an award-winning professor.