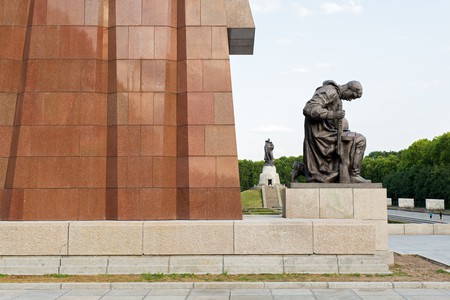 Discover the places where Communist East Berlin survives, 30 years after the fall of the Berlin Wall.

Berlin was reunified only in 1990, after 41 years divided into Allied- and Soviet-occupied zones, so it’s hardly surprising that Communism has left its mark on the former East Berlin. A journey into Ostalgie –nostalgia for the old East (ost) Germany – takes in colossal war memorials, organic Soviet-inspired soft drinks, the world-renowned Checkpoint Charlie and a car that became synonymous with freedom.

There are few symbols more evocative of Communist-era Berlin than the Trabant, the iconic East German people’s car. Colloquially known as the Trabi, this car (first produced in 1957) was designed to be cheap and easy to mass-produce. Among the car’s idiosyncrasies was the need for multiple keys: one for the ignition, and one for the driver’s door and boot. The Trabant took on a new symbolic meaning when the Berlin Wall came down in 1989, with East Germans streaming west through the newly opened border crossings. The car’s status as an emblem of freedom and of Germany’s reunification is memorialised by artist Birgit Kinder’s mural of a Trabant breaking through the Wall, which can be seen today at Berlin’s East Side Gallery. For a more interactive experience, visitors can take a Trabi tour through Berlin. 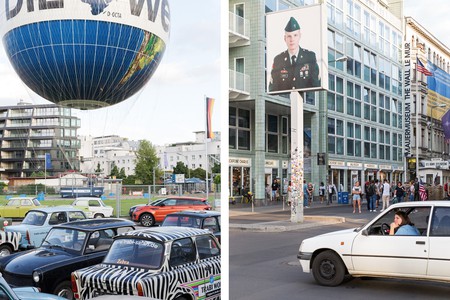 Built to epic proportions, the Soviet War Memorial in Berlin’s Treptower Park is the largest Soviet war memorial outside of the former Soviet Union. Designed by Soviet architect Yakov Belopolsky and opened four years after World War II, in May 1949, the site is not solely a symbolic memorial – 7,000 Red Army soldiers were also laid to rest here in a military cemetery. At the centre of the memorial is a colossal statue of a Soviet soldier carrying a German child, standing over a broken swastika – one third of a triptych entitled The Motherland Calls. The other two constituent monuments can be found in Magnitogorsk and Volgograd in Russia. 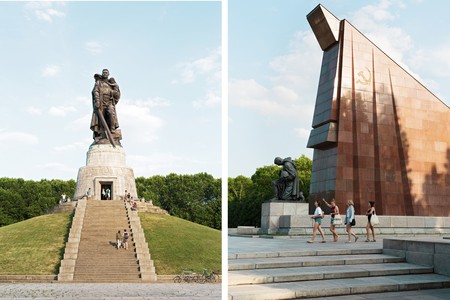 In the early 1970s, Baikal was launched in the USSR as a Soviet counterpart to Coca-Cola. After the drink all but disappeared in the 1990s, in 2009 a Berlin-based Dutch photographer with fond memories of living in Moscow had the idea of relaunching it. Out of his studio in stylish Kreuzberg, Wostok was born. Meaning ‘east’ in Russian, the drink’s name is a homage to its roots and to the Soviet space flight that saw Yuri Gagarin become the first human in space.

In the years since, the team at Wostok has developed a menu of products inspired by the cuisines of post-Soviet states: Uzbek date and pomegranate, Georgian tarragon and ginger, Armenian apricot. The drink is sold across Germany, including in hipster haunts throughout Berlin. This product brings together Soviet nostalgia with the organic and eco-food movement (the product’s makers are firmly anti-plastic and pro-vegan), in effect appropriating the aesthetics and tastes of a bygone era to capture the zeitgeist of the present.

Founder Joris van Velzen told Culture Trip, “Part of Wostok’s appeal may be the very fact that it’s not produced by Coca-Cola or Nestlé… David versus Goliath! The drink is now exported to many countries, including, ironically, Russia.” 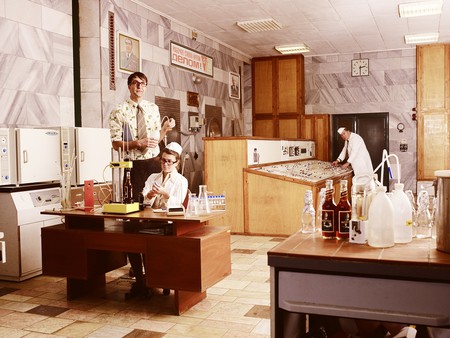 A short walk from Brandenburg Gate stands one of Berlin’s more curious monuments. Set in the expansive, verdant Tiergarten Park, the Soviet War Memorial is not necessarily surprising for its design. It was built in a style similar to other World War II monuments once found throughout the former Soviet Union and Eastern bloc, taking as its focal point a statue of a Soviet soldier, flanked by two tanks and a pair of artillery guns.

What makes this memorial unusual is its location, in former West Berlin. Owned and maintained by the Soviets throughout Berlin’s division, the Tiergarten Soviet War Memorial constituted an Eastern bloc enclave within Allied territory, with Soviet soldiers sent every day to guard the monument. Today, visitors to the memorial can find an outdoor exhibition showing photographs of its construction in 1945, just a few months after the city’s capture by Soviet forces. 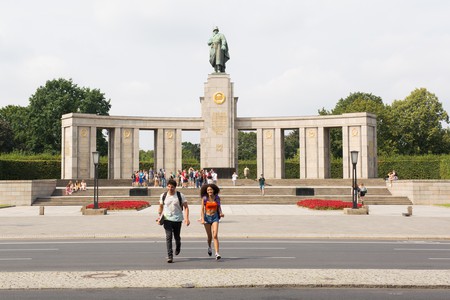 If you’re in the mood for some Russian classics while exploring the streets of Friedrichshain, Kreuzberg or Prenzlauer Berg, look no further than Datscha. Run by Russian émigrés Ilja Kaplan and Georgij Solanik, this café-restaurant captures the essence of a Russian dacha – a rural holiday house or cottage, often set in the exurbs of the city – with framed photographs adorning the walls, wooden furniture and a homely feel. Here, you can savour a bowl of borscht (beetroot soup), fill up on pelmeni (dumplings) and blini (filled pancakes) or enjoy a generous Sunday brunch buffet.

One of the few innovations from Communist East Germany to have survived the fall of the Berlin Wall, the Eastern Crosswalk Man (Ost-Ampelmännchen) was the world’s first pedestrian crossing signal to feature a figure wearing a hat. The seemingly purposeful (not to mention well-turned-out) character was designed in 1961 by traffic psychologist Karl Peglau, and momentarily fell foul of attempts to standardise all traffic signs to the West German forms after German reunification. Following campaigns to save the jaunty Eastern Crosswalk Man, the beloved character eventually returned to the streets and eventually became something of a cult figure. 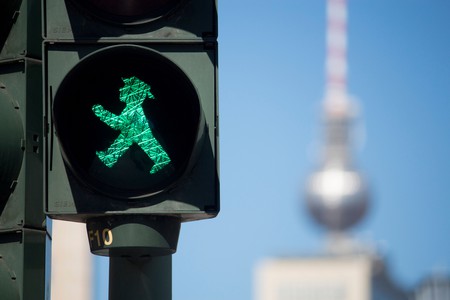 The Palace of Tears

The forbidding moniker Palace of Tears (Tränenpalast) offers a poignant encapsulation of the sorrows experienced within its walls; this border crossing’s colloquial title stems from the many tearful farewells that took place in front of its distinctive glass and steel pavilion. Constructed at the Friedrichstraße train station in 1962, just after the Berlin Wall was erected, the Tränenpalast served as a major crossing point for passengers travelling from East to West Berlin. Used as a nightclub and venue from the fall of the Berlin Wall until 2006, the former border crossing now houses Border Experiences: Everyday Life in Divided Germany, an exhibition that explores the Cold War period and the process of German reunification. 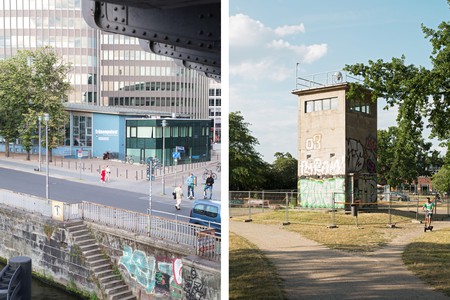 It may well be a tourist trap, but no trip to Berlin is complete without a visit to Checkpoint Charlie, the best-known crossing point between East Berlin and West Berlin. Also known as Checkpoint C, for 28 years Checkpoint Charlie was designated as the sole crossing point for foreigners and members of the Allied forces. Now, this emblem of the Cold War hosts a copy of the guardhouse and sign that once marked the border crossing. A light-box installation frames the checkpoint, towering over the hordes of tourists. Created in 1998, Frank Thiel’s Untitled comprises two large portraits, one of an American soldier and another of a Russian soldier, demarcating the division between the former sectors of the city. 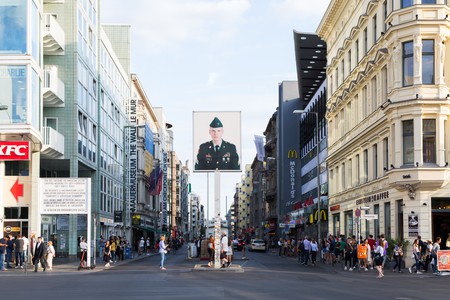 The elaborate Socialist Classicist structures that dominated the first phase of construction of the monumental boulevard Karl-Marx-Allee (formerly known as Stalinallee between 1949 and 1961) gave way to starker, more functional design in its second phase. Among the Plattenbauten (concrete prefabs) that characterise this second phase, the Kino International stands out as a monument to Modernist architecture. Designed by Josef Kaiser and Heinz Aust, the three-storey Kino International was East Germany’s foremost cinema, hosting premieres of the state-owned DEFA film studios until the fall of the Berlin Wall. Today, it serves as one of the principal venues of the Berlinale film festival. 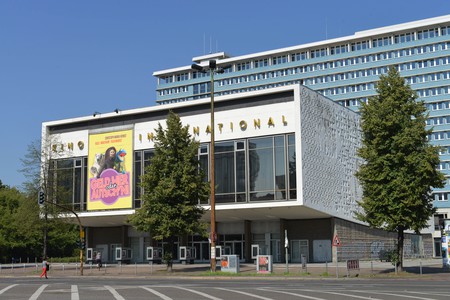 Also designed by Josef Kaiser as part of the second construction phase of Karl-Marx-Allee, Café Moskau (Moscow) opened in 1964 as an architectural emblem of the brotherhood between East Germany and the Soviet Union. The friendship between the states was symbolised in the building’s design, not least by the life-size replica of Sputnik 1 (the world’s first artificial satellite), which still adorns the building’s entrance today; once inside, visitors could dine on Russian cuisine, and buy souvenirs and traditional arts and crafts at a shop called Natascha. The building – also then home to a coffee bar and dance hall – was built as one of seven “nationality restaurants” in East Berlin, designed to introduce East German citizens to the culture and cuisines of other Communist states.

Though Café Moskau endured the fall of the Berlin Wall in 1989, it shut its doors in 1995 until the turn of the 21st century, when stalwarts of the Berlin party scene began to host legendary parties at the venue. Since 2009, Café Moskau has been used as a multifunctional event venue, though the towering Sputnik and mural – featuring the Moscow skyline, onion-domed churches and Russian wildlife – give visitors a glimpse into the building’s original purpose. 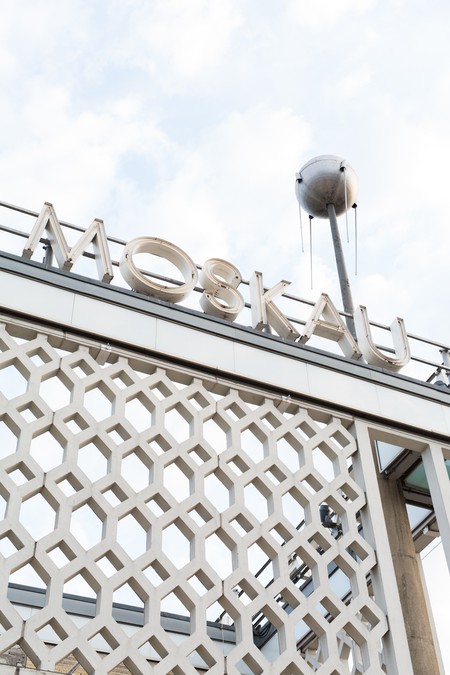