A Glimpse of the Beautiful Fountains of Aix en Provence 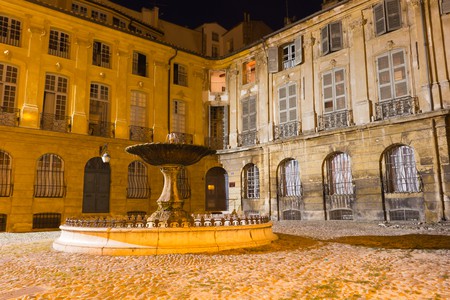 Aix has so many amazing fountains | © Luca Quadrio/Shutterstock

Aix en Provence is known as the City of a Thousand Fountains. Here’s a brief glimpse of the most beautiful fountains of Aix and an overview of why Aix has so many of them, as well as where to find them.

The Romans called Aix en Provence, Aquae Sextiae (The Waters of Sextius) ever since they discovered the natural thermal water source and installed their Roman baths. One of the main spas in town still uses the same place as the source for their natural thermal baths (Thermes Sextius). 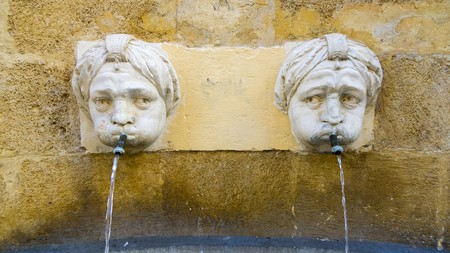 After the demise of the Roman empire, Aix was known as a city of many fountains (although it’s difficult to imagine there are 1,000 of them). There are all kinds of shapes and sizes and, historically, the locals used them for many different reasons – washing clothes, for instance. During the Transhumance, when farmers moved their cattle from the lower ground up into the hills, the fountains were used to quench the animals’ thirst. 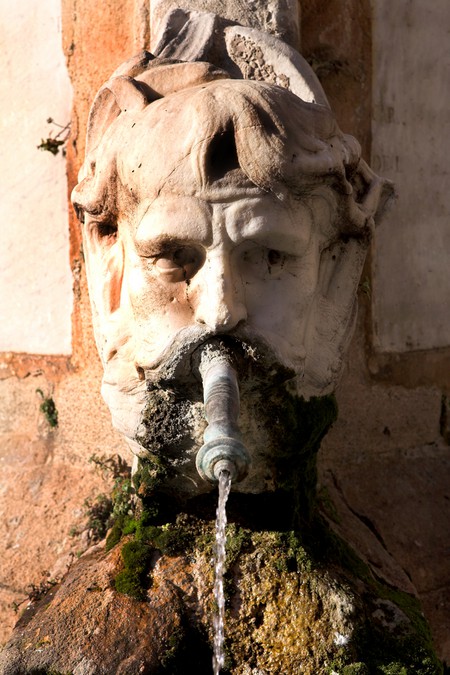 Today, locals still use their fountains. You’ll often see dogs cooling down in them, as do the kids (but perhaps not at the same time). Some restaurants use the fountains to cool their wine down during the summer months. The water is undrinkable in the main fountains but the water fountains found on many street corners can be used to drink from. 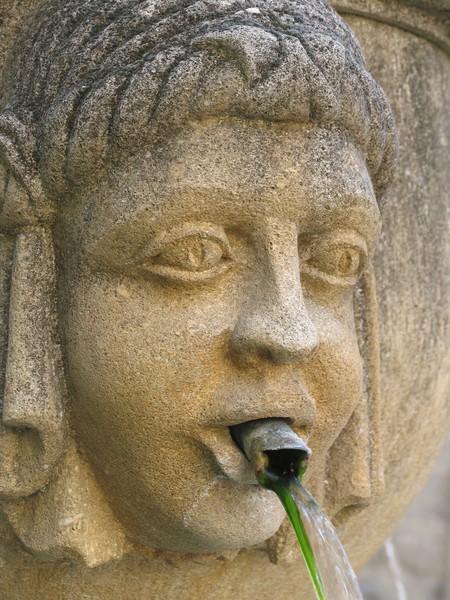 It’s easy to find a fountain on any street, in any alley or any major square in Aix en Provence. 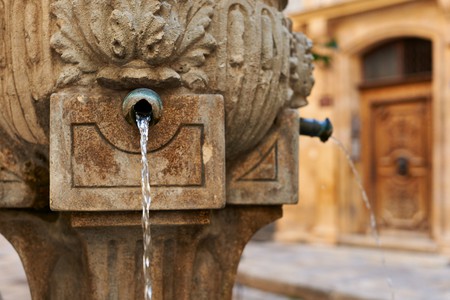 The fountains in Aix are truly magnificent | © Nikolay Dimitrov/Shutterstock

The Place des Quatre Dauphins (Square of the Four Dolphins) is a must-see on any tourist itinerary. It was built by Jean-Claude Rambot in 1667. 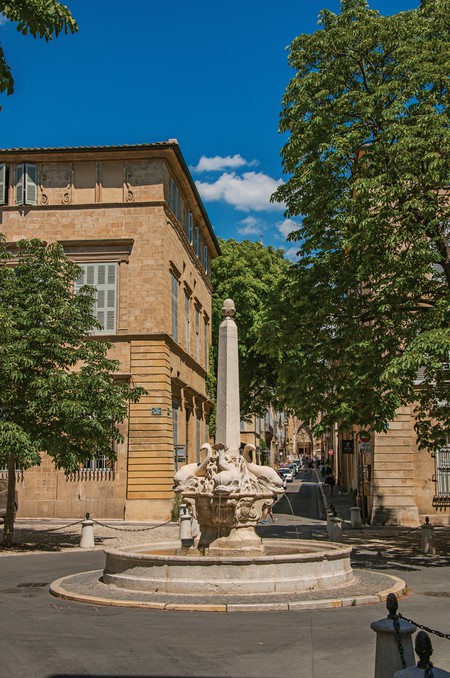 The fountain of 4 dolphins | © Celli07/Shutterstock

This was apparently the first free-standing fountain in Aix. It’s in the Mazarin district; the beautiful, leafy residential heart of Aix. It’s near the Mignet (the school that the painter Cézanne attended) and many teenagers often play in the water to cool down in the summer. 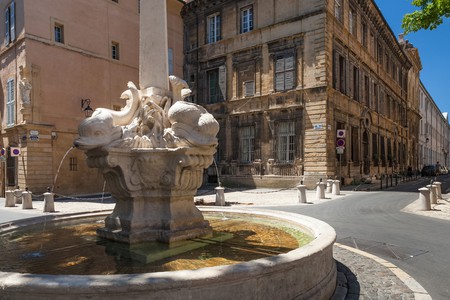 The Albertas family arrived from Alba in Italy in the 18th century, to take possession of a house they had inherited. Several members of the family made dramatic renovations, building an ornate Baroque square. In 1912, a fountain was added in keeping with the style and in 2000, the square became a national monument. 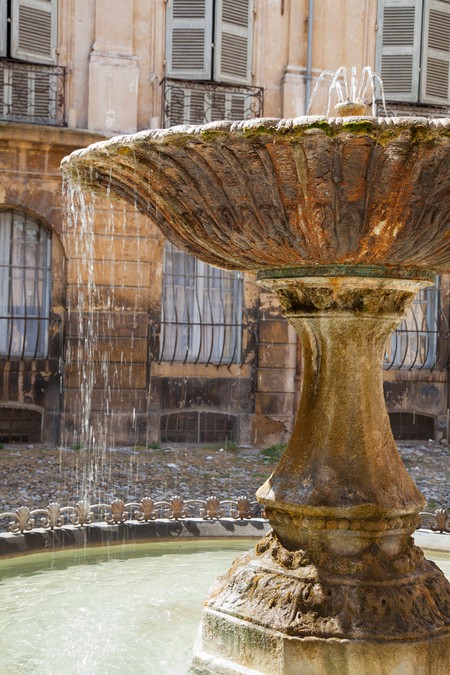 Today, you are just as likely to find tourists marvelling at the beautiful square as you are to find locals eating their food on the steps during a lunch break. During the summer, you may hear music as you pass by, as it’s a favourite with street musicians. 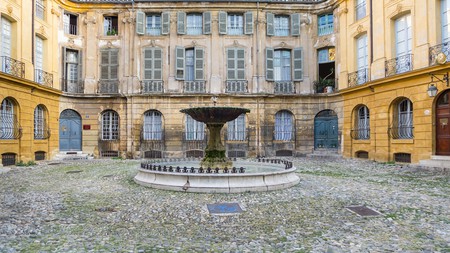 In 1860, the town commissioned the most famous of all Aix’s fountains, La Rotonde. The three figures on the top depict the town’s central business pursuits: justice, agriculture and fine arts. 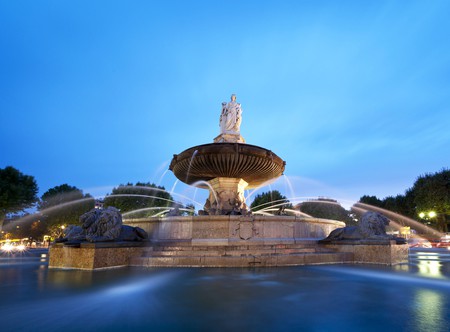 The Rotonde is a key feature in local life. Town markets begin here and wind their way up the town’s main boulevard, Le Cours Mirabeau, all through the year. Locals meet friends here in the evening and taxis drop off and pick up by pulling over on the roundabout that surrounds it. If you get lost in the Old Town of Aix en Provence, you simply need to walk downhill and you will find your way back to La Rotonde. 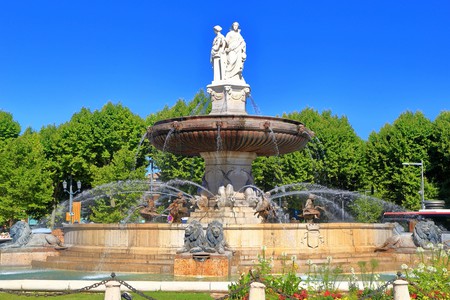 La Rotonde is perhaps the most famous, and the most central, of all Aix’s fountains | © Inu/Shutterstock

This fountain of moss (moussue) is a firm favourite. Situated on the Cours Mirabeau, its water source is natural (from the Bagniers spring), so is often warm. Very occasionally it can be frosted on the outside in the height of winter, but it’s not very common as temperatures in Aix don’t often drop below freezing. 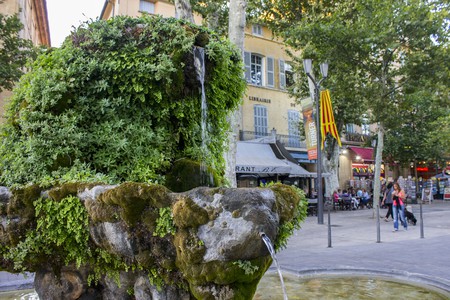 Today it’s a central spot in Aix. The carnival passes by here every April and people often stop to have a seat on its wall to admire the view. 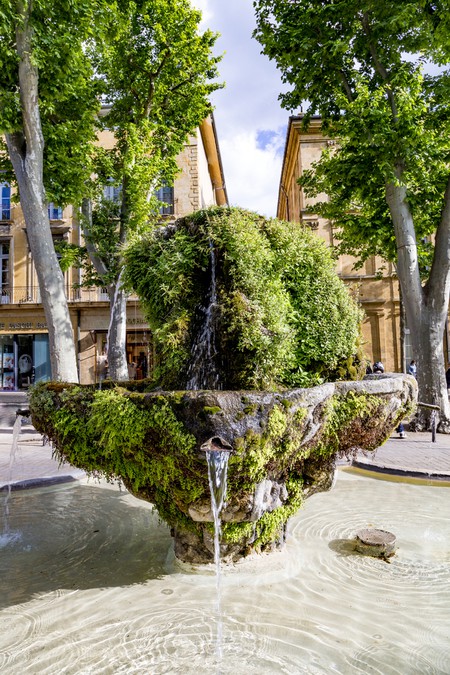 The Fontaine Moussue is situated on the famous boulevard in Aix, Le Cours Mirabeau | © Richard Semik/Shutterstock

The Fountain of the Boar is in the square where the daily market takes place, 365 days a year. It’s situated outside the upmarket food chain, Le Pain Quotidien, and kids can often be found climbing on it or around it. It’s a great place to meet up with friends after browsing the market. 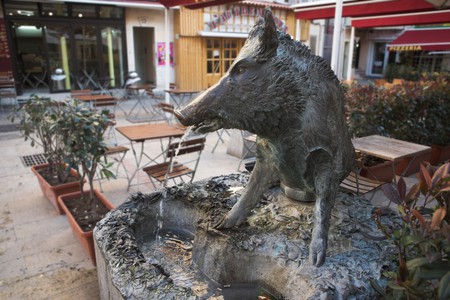 Legend has it, in 1524 a citizen of Aix stood against an invading army and inexplicably, an elm tree began to grow in the spot. This fountain now takes its name, and is also where the local restaurant cools its wine in the summer months to serve its guests. 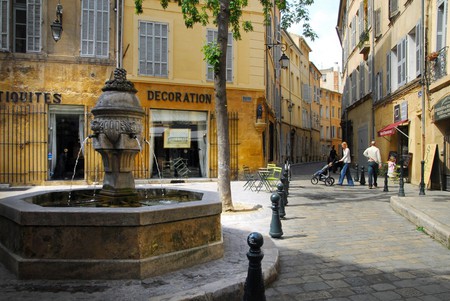 This fountain was originally built in 1620 but was completely rebuilt in 1820. It has been classed as a historic monument since 1949. In days gone by, the water from the basin was used to supply water to the steam locomotives in the nearby train station. 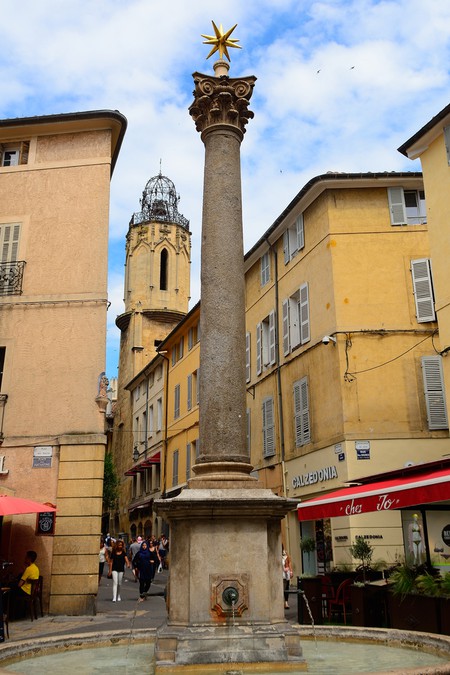 Located in the old Mazarin district of Aix, you’ll find the Cathedral of Sainte-Jean-de-Malte. Just outside is the Musée Granet where you will see many of Cézanne’s paintings. The fountain in the square is often a meeting point for funerals, weddings, tourist groups and locals alike. 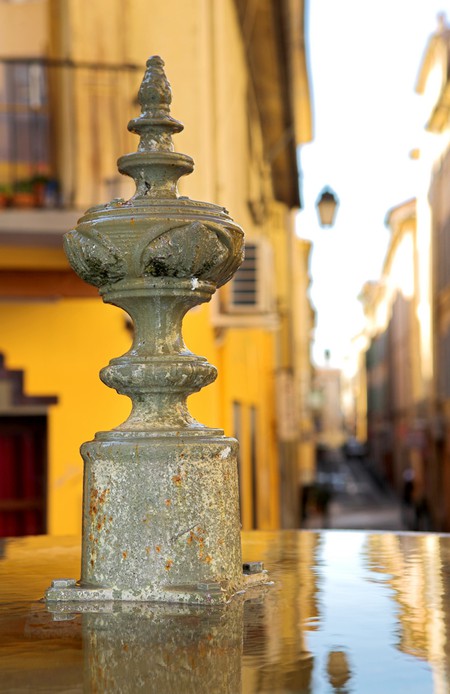 Place des Prêcheurs is one of the main squares in Aix en Provence, where the main law court is situated. It used to be the heart of public life before the Cours Mirabeau was built. Its fountain was initially built by Jean-Pancrace Chastel in 1748, was destroyed in 1793 and then rebuilt in 1833, thanks in part to American sponsorship. 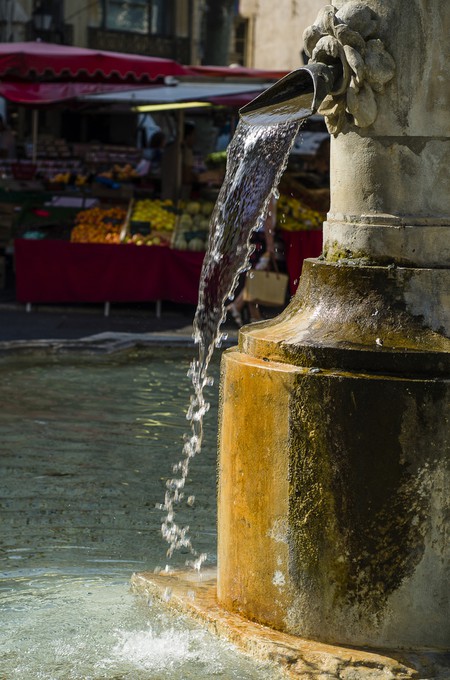 Wherever you look, fountains are all over Aix. And they often provide much-needed water to a city that can be dry and very hot in the summer months. 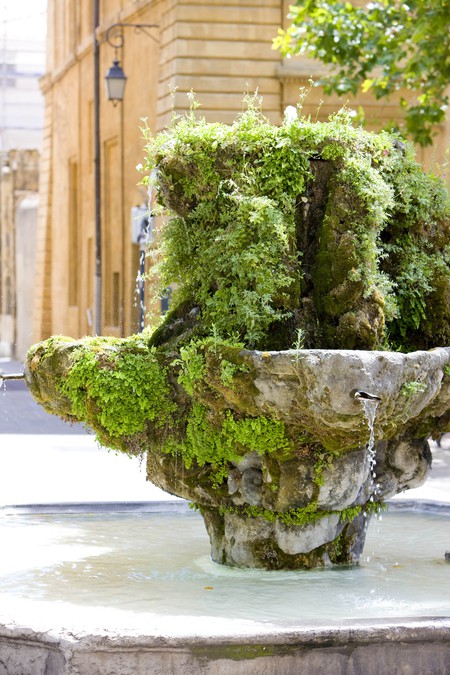 Aix is as well known for its fountains, as well as its warm weather | © Richard Semik/Shutterstock

In order to conserve water, many of the fountains are turned off during the night and some are being renovated to include modern water-saving and recycling devices. 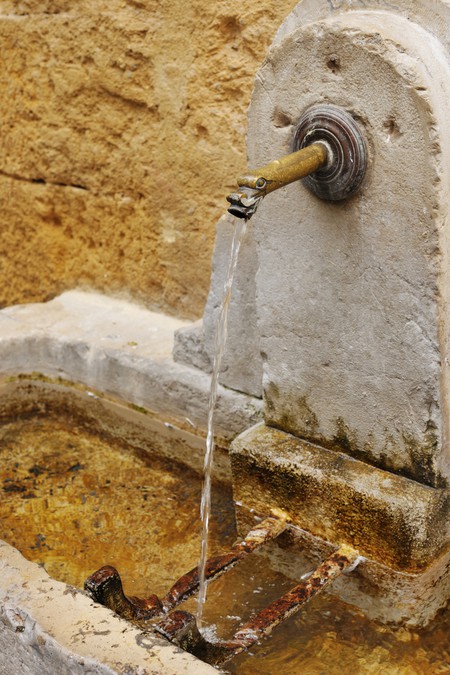 One thing is for sure, there’s a fountain for everyone in this magical, must-see city. 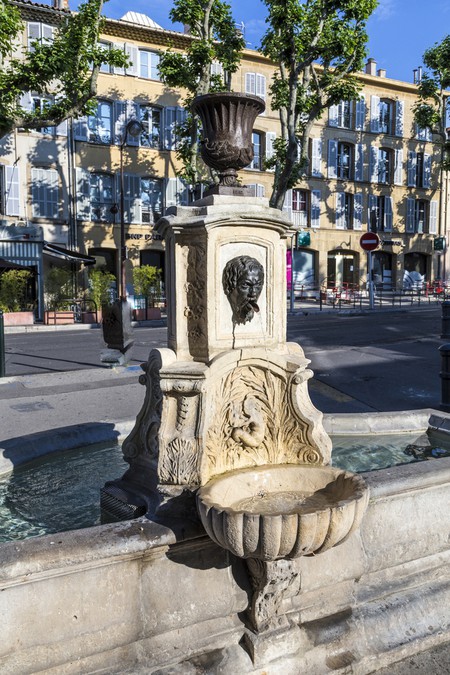