The 10 Best Beaches to Soak Up the Sun in Cyprus 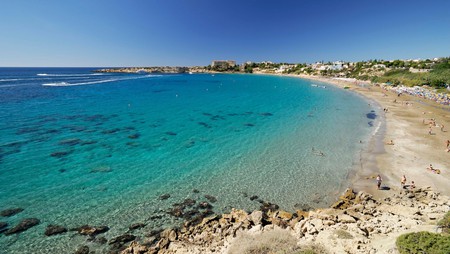 Cyprus is the third-largest island in the Mediterranean Sea, and has a large variety of Blue Flag-awarded beaches. The Blue Flag certification recognises the environmental quality and water cleanliness of bathing sites, and Cyprus’s beaches usually rank highly when measured against other seaside spots in Europe. You can find everything here, from dark sands and private havens, to populated strips, motionless waters and wild, untamed seafronts. Here’s our guide to the 10 best beaches in Cyprus, the island of love. 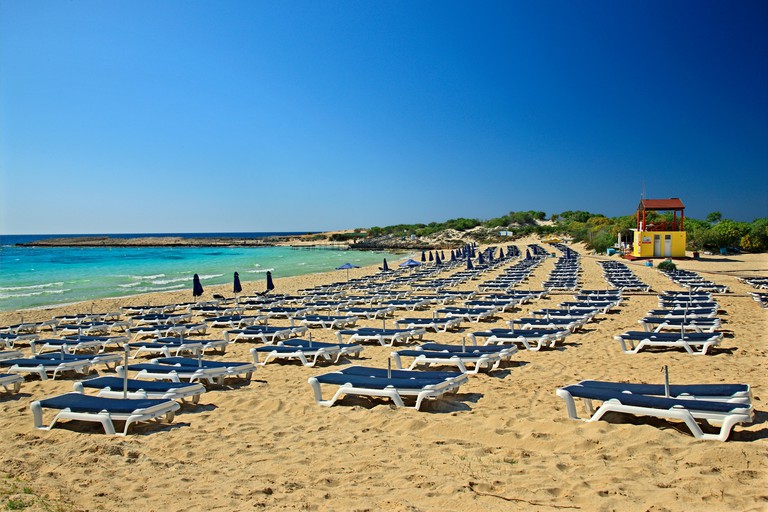 © Hercules Milas / Alamy Stock Photo
When viewed from above, this peninsula forms the shape of a dolphin tail. Chalky white sands form a soft walkway into the ocean and a two-minute walk through the lush green shrubs leads visitors to a more secluded stretch of coast. A former reef, the peninsula is home to a variety of interesting rock formations and, at its tip, you’ll even find some ancient tombs which can be visited for free.

Natural Feature
Facebook
Email
Twitter
Pinterest
Copy link
Share
Map View
Coral Bay is a swathe of golden sand protected from strong currents by the surrounding cliffs, making for a true sun-worshipper’s paradise. You’ll find umbrellas and sunloungers, not to mention a wide range of water sport options – and the beach has been awarded a Blue Flag, meaning its waters are clean and safe for swimming. Controlled development of the area means the resort has maintained most of its charm despite its popularity with tourists, and a bite to eat is never far away, as a vibrant selection of restaurants and bars are within walking distance.

Natural Feature
Facebook
Email
Twitter
Pinterest
Copy link
Share
Map View
Nissi Beach has the reputation of a beach that never sleeps, and its natural beauty is undeniable: a large curve of white sand creates a cove of beautifully clear, shallow waters. When the tide is low in winter and spring, a sand walkway is unveiled leading to the small island of Nissi from which the beach takes its name. The walkway makes it possible to cross over to the island, which is inhabited by small shrubs and pretty plants. 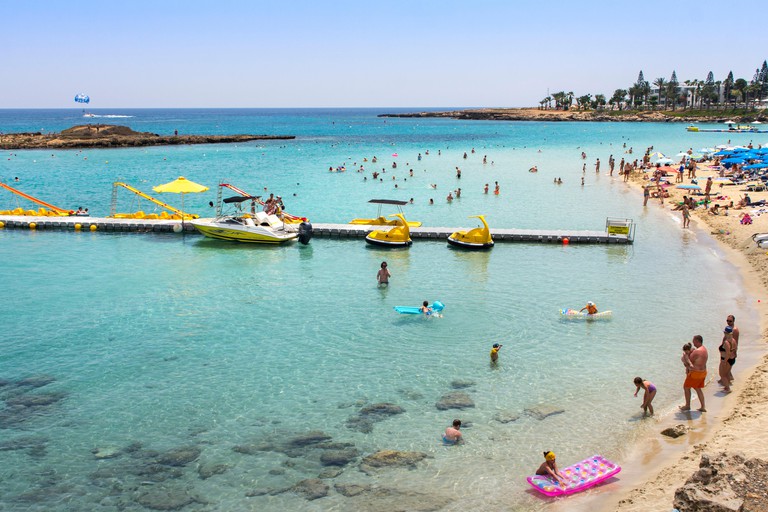 © Tove Larsen / Alamy Stock Photo
For a good mix of tourists and locals, head to the stunning Fig Tree Bay; these golden sands are truly a Cyprus must-see. Taking its name from the idyllic fig trees that line its coast, this stretch of sand is breathtakingly beautiful. The islet here is home to shallow waters and picturesque paddling pools, making it an ideal place for children.

Natural Feature
Facebook
Email
Twitter
Pinterest
Copy link
Share
Map View
A stroll along the promenades of Akti Olympion proves that it is possible for a city beach to be worth visiting. This beach began life as a thin strip of pebbly sand; after much restoration and regeneration work, Limassol’s seafront area has now been transformed into the bustling and attractive city centre it is today. Pristine waters and more than two kilometres of silky sand make this an ideal spot for a relaxing coastal stroll.

Natural Feature
Facebook
Email
Twitter
Pinterest
Copy link
Share
Map View
Found almost exactly halfway between Protaras and Agia Napa, Konnos Bay welcomes a mix of visitors. This small cove has a modest amount of reasonably priced umbrellas dotting its sands, and the water here is always calm due to the sheltered position of the bay. Visitors in the early part of the year will be able to enjoy the lush seasonal greenery that takes hold of the surrounding cliffs. 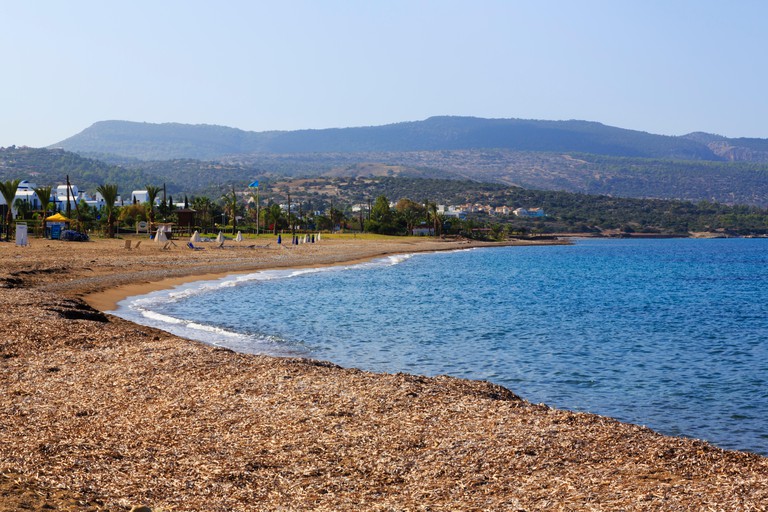 © iWebbtravel / Alamy Stock Photo
Another lesser-known coastal spot is Latchi Beach. A mixture of powdery sands and small pebbles form the coast here, and the lack of facilities means it is the perfect location to bring your own umbrella and enjoy a picnic. The waters are clean and undisturbed so sit back, relax and take in all of the impressive natural scenery that surrounds the shore.

Natural Feature
Facebook
Email
Twitter
Pinterest
Copy link
Share
Map View
The enthralling turquoise waters of Blue Lagoon Akamas are so vivid they seem to glow. Frequented by small boats and yachts, this natural treasure is found on the north coast of the island. Reachable by 4×4 or boat, the wild terrain has been shielded from commercial development, which has allowed this beautiful environment to remain pristine. Snorkelling is poplar here, due to the variation of underwater environments. For a bird’s-eye look at the lagoon head to the nearby mountains, which provide views down the entire coastline.

Ruins
Facebook
Email
Twitter
Pinterest
Copy link
Share
Map View
Offering a stark contrast to the typically calm waters found throughout Cyprus, Episkopi is famed for being a popular destination for kitesurfers, as the winds here make the region ideal for the sport. The looming limestone cliffs only add to the dramatic landscape and, as they are overlooked by the ancient ruins of Kourion, are undoubtedly the best place from which to observe the beach from above. Strong currents mean swimming is off limits in the eastern part of the coast, but wading into the waves further along is perfectly safe, and bobbing with the tide is surprisingly relaxing, not to mention a little more exciting than a typical dip in the sea. 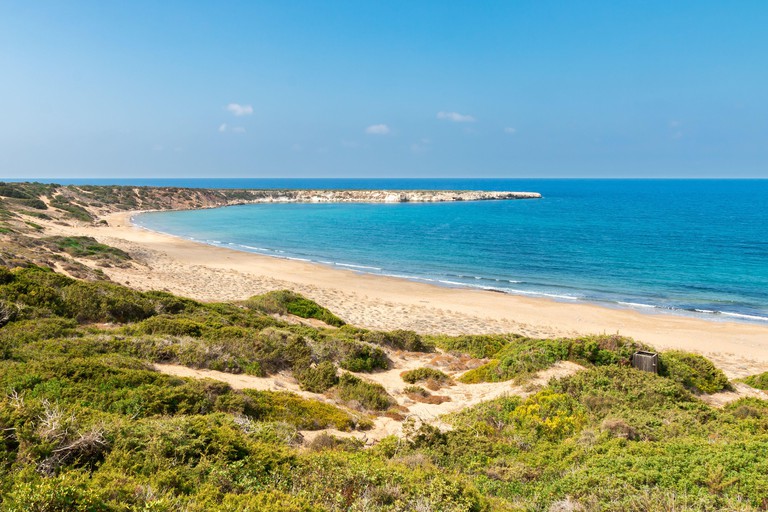 © S_a_J / Alamy Stock Photo
Rugged and untamed, Lara Beach lies north of the popular coastal resort of Coral Bay. Although you may need a fair amount of time and a 4×4 vehicle to reach this isolated landscape, what the sandy cove lacks in accessibility it makes up for in privacy. The absence of nearby artificial light makes this site a popular nesting spot for green and loggerhead turtles, whose nests are easily identifiable, as they are clearly marked out by volunteers.
Give us feedback