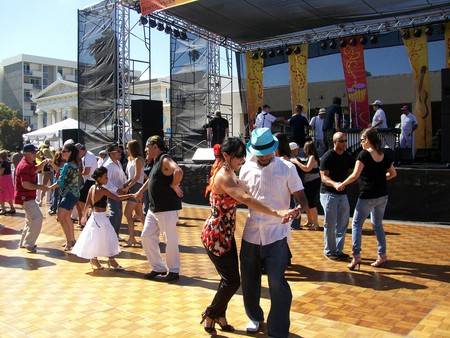 Created by Latinos, with a heavy Puerto Rican influence, salsa music came to prominence in the 1960s in New York City. A mix of musical styles, the very danceable genre has become popular all over the world. Some of the biggest salsa icons hail from Puerto Rico. While there were many accomplished musicians and singers to choose from, the following seven artists each definitely deserve the title of icon and have paved the way for contemporary salseros.

Lavoe’s distinctive and unmistakable voice helped make him a standout artist. Born in Ponce, Puerto Rico, he admired artists like Ismael Rivera and Cheo Feliciano, also featured here, and went on to sing salsa classics of his own such as “El Cantante.” After moving to New York City, Lavoe established a successful musical collaboration with Willie Colon that resulted in 14 albums, some of which are Christmas classics with songs like “La Murga” and “Canto a Borinquen.” He ultimately succumbed to the temptations of fame, but his legacy in salsa remains.

Created and led by pianist Rafael Ithier, El Gran Combo de Puerto Rico is celebrating its 55th year of existence with a concert this May. The 13-member group have been named by the Puerto Rican Senate, the “Ambassadors of Our Music” as Billboard notes, and have continued success even with changes in its lineup of singers and musicians. Ithier has been the only constant member during the group’s history. Hits include “Brujeria“, “Arroz Con Habichuelas“, “Me Libere“, and “Que Me Lo Den en Vida.”

Another Puerto Rican salsa artist whose development was influenced by his time in New York, is Cheo Feliciano. The 2008 Latin Grammy Lifetime Achievement award winner, he recorded with multiple salsa orchestras and as a solo artist, whose hits include “Sali Porque Sali“, “El Raton” , “Mapeye“, and “Anacaona.” He was not only a talented salsa singer, Feliciano also found success with romantic ballads.

Known as “El Sonero Mayor”, Ismael Rivera sang with various groups and had success with salsa pioneer Rafael Cortijo. A huge infulence, according to a biography of his life, “Rivera is synonymous with bringing the Afro-Boricua musical form of bomba onto Puerto Rico’s main performance spaces and most popular radio and television programs and using it as a basis for the creation of Puerto Rican salsa.” Some of his most notable songs are “El Charlatan“, “Mi Negrita Me Espera” and “Cumbanchero.”

The salsa duo met in Brooklyn, New York, and have become very well-known as a team, with Richie Ray singing and Bobby Cruz the pianist and composer. Despite numerous hits and a decades-long partnership, Richie Ray and Bobby Cruz announced in 2016 that they were going their separate ways. A few must-listen songs from them are “Jala Jala”, “Sonido bestial”, and “Ya ni te acuerdas.”

Founded in 1954 by Enrique Lucca Caraballo and Antonio Santaella, La Sonora Ponceña is a salsa orchestra with more than 50 years in music, and many hits despite changes in its line up. Their first U.S. performance was in New York City in 1960. Papo Lucca, Enrique Lucca’s son, is a prodigious piano player who has set up with his father one of the most successful, if not the most successful, father-son musical collaboration in salsa. Similar to other salsa icons, their hits are numerous but listeners should definitely take a listen to “Fuego En El 23”, “Yambeque”, and “Huracan.”

Tommy Olivencia was a very successful band leader, who also sang, and his salsa orchestra served as a launching pad for singers like Gilberto Santa Rosa, Lalo Rodriguez, Marvin Santiago and Frankie Ruiz, among others. His band La Primerisima Orquesta de Puerto Rico was an accomplished assortment of musicians as well. Olivencia made music for four decades and hits include “Plante Bandera”, “Casimira” and “Trucutu.”

Other salsa icons that won’t disappoint listeners are Bobby Valentin, Raphy Leavitt, and Willie Rosario. Videos of their music can also be found on YouTube, and enjoyed across various music listening and purchasing platforms.