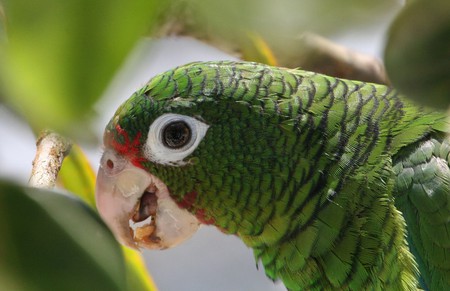 El Yunque on Puerto Rico’s east side is the only rainforest included in the US National Forest Service and it is known for its rare trees and birds. It is one of the smallest rainforests, but has a diverse habitat. As of January 2018 El Yunque is closed as it recovers from the massive damage sustained during Hurricane Maria, but you can continue to check their website and plan a trip as soon as it reopens. Here are some things to know before you go.

There are many waterfalls and rivers in the rainforest. On La Roca (The Rock) on the south side of the park there are Taino petroglyphs, some of which depict their god, Yikiyú, who they believed lived in the mountains of the rainforest. There are over 240 species of plants and trees in El Yunque. 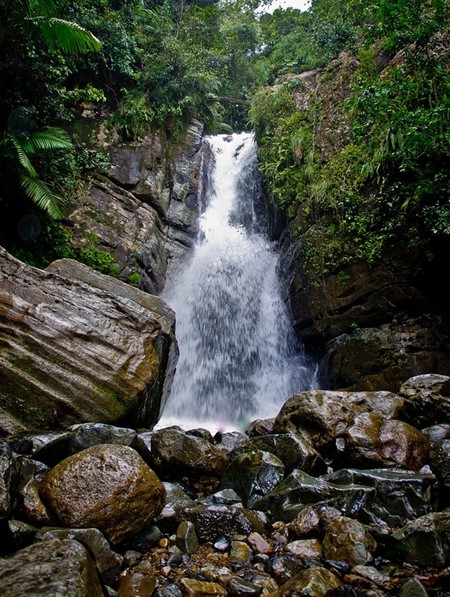 One of the most colorful birds is the little tody, which the locals call San Pedrito. Todies are often seen in El Yunque traveling in pairs, eating insects and chirping to each other. The Puerto Rican screech owl can also be found in the rainforest, and it is the only owl on Puerto Rico or the Virgin Islands.

Perhaps the most stunning bird of El Yunque is the Puerto Rican parrot, but it is also one of the saddest stories. At the time of the first Spanish colony in the early 1600s, there were believed to be a million parrots on the island, but over the years, as human population increased and deforestation occurred, the numbers dropped drastically until in 1973 there were only 13 iguacas, the Taino word for the parrot. The Puerto Rican Parrot Recovery Program was making great strides to renew the population and at last count, before Hurricanes Irma and Maria, there were almost 60 parrots in the wild.

After Irma, Marisel Lopez and other scientists did a count and found 31, but after the stronger and much more devastating Maria, Lopez and others were first unable to find any of the wild parrots. Many people are helping in the search and reporting sightings to the scientists, as well as posting them on Facebook, so the hope is that some of the flock have just moved to find better shelter and food and will return. Unfortunately some of the parrots were located through the transmitters they wore and were found dead. 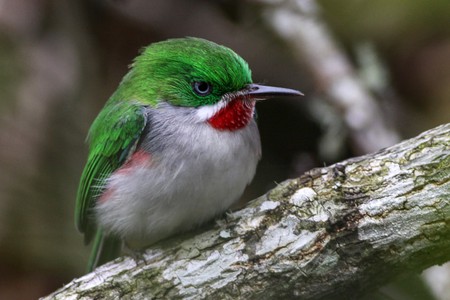 The island was created during the Triassic period as a result of volcanic activity, so any wildlife on the island had to swim, fly, or float here. As a result, the only mammal native to Puerto Rico is the bat. In El Yunque you may also see rats and mongoose, the rats brought here on ships as an inherent part of sailing, and the small Indian mongoose imported in 1877 in an attempt to control those very rats in the sugar cane fields.

The real wealth of wildlife is the many reptiles and amphibians. The trees are abundant with coquí, you may also see worm lizards, Puerto Rican boa (although all snakes in El Yunque are very timid and rarely seen), galliwasps, skinks, and so much more. 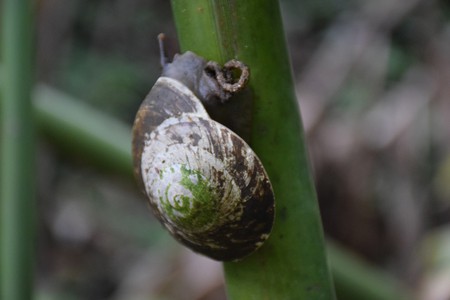 While it may seem odd, the US Forest Service gets this question often, and the answer is technically no, but they explain what happens to make it seem as if it is raining coquí. They explain this on their website: “This interesting forest legend involving Puerto Rico’s indigenous coquí frog (Eleutherodactylus coquí) is actually based on scientific fact. During those times of the year when the humidity is high, the tiny coquí frogs will climb to the forest canopy, sometimes as high as 100 feet (30 meters). Predators such as the tarantula, anticipating this behavior, lay in wait for the frogs. Many frogs are caught by the predators during their ascent. Instead of returning to the ground by the same dangerous path, the surviving frogs prefer to launch themselves into the air, thus bypassing their predators on the way down. The tiny frogs are almost weightless so that they float to the forest floor unharmed. If you are lucky enough to be sitting under a tree when this is happening, you will indeed be rained upon by tiny frogs!” 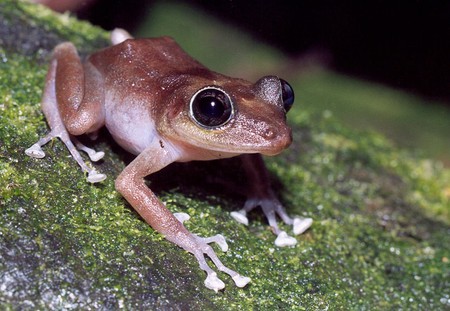 Coquí | © US Fish and Wildlife Service/flickr

At the highest points of the mountains, the constant cloud cover and rain make it difficult for plants and trees to take root because the soil is so wet, so the plants seem to grow miniaturized versions of themselves. 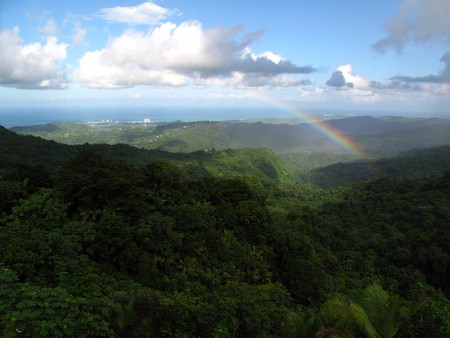 The prism of color in El Yunque | © schizoform/flickr

While it would seem that the wet environment would result in a prolific mosquito population, the water in El Yunque is constantly running down the mountain and rapidly, and it rains about four times a day preventing any standing water, so there are no mosquitoes in the rainforest. You can wear insect repellent if you choose, but if so DO NOT go into any water sources. The chemicals in bug spray are hazardous to the fragile ecosystem. Perhaps just cover with long pants and long-sleeved shirts instead of using repellent. 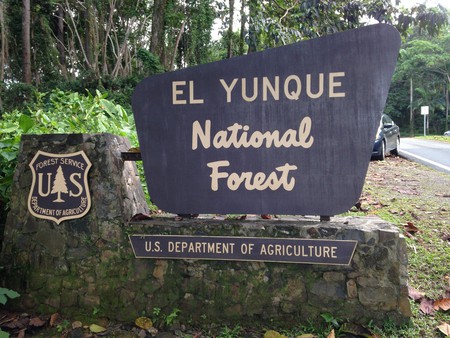 There are many well-maintained hiking trails. There are 16 different hiking areas, so you could easily explore for a few days. El Yunque Trail begins at the visitors center and takes you up the mountain, where at the end of the trail you can explore the dwarf forest. Mt Britton trail takes you to the stone tower made by the CCC (Civilian Conservation Corps) in the 1930s, which you can climb up and see for miles. The most popular trail is La Mina, which follows the river by the same name through the lush foliage and crosses the water in several places. La Mina is less than a mile, but is rated as challenging due to steep curving steps. Certain trails will take you up as far as 3,000 feet. 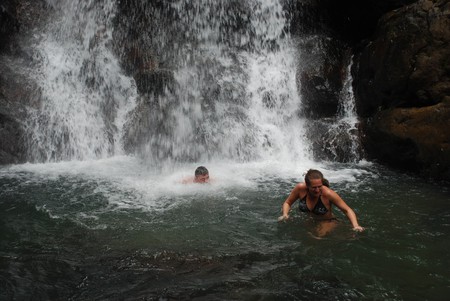 The truly adventurous spirit may want to have a 24-hour experience in El Yunque and set up camp. A permit must be obtained a minimum of two weeks in advance, and it is very rustic camping. You must bring all necessary supplies and equipment, and make sure everything gets hauled back out with you. Being able to share stories of the night sounds and activities will be a treasure you will hold forever.

It is quite a bit cooler in the rainforest, so it is best to wear long pants and a long-sleeved shirt. This also helps with any insects there may be, and there are some plants that could potentially cause irritation if they come in contact with skin. It is also very important to remember, IT RAINS EVERY DAY in El Yunque, about four times a day, so bring rain gear. A poncho can easily be stored in a backpack. Also make sure you wear comfortable sturdy shoes with good traction. Hiking trails are groomed, but there are some areas of mud and the stone can be slippery at times. 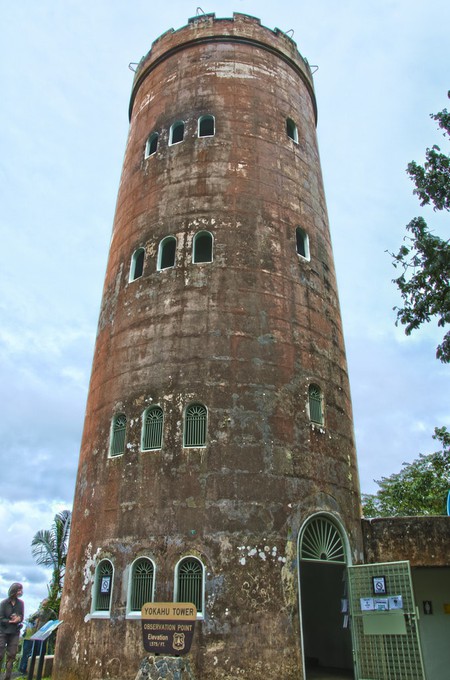 There is no lodging within El Yunque, but there are a number of hotels, resorts and vacation rentals nearby. It is only about a 40-minute drive from San Juan to the entrance of the park, so you can make it a day trip.