The Story of Folly Ruins, Jamaica

A crumbling testament to the power of pursuing a dream, Folly Ruins on the north coast of Jamaica stirs the imagination. This derelict mansion-house on a private peninsula adjacent to Port Antonio still draws visitors to this quiet corner of the island. From wealthy American explorers to dancehall artists, the history of Folly Mansion is a Jamaican legend.

In 1904, Folly Point was a quiet, unspoilt outcrop on this far-flung British colony. The uninterrupted views of the Caribbean sea are captivating—turn around and the lush Blue Mountains dominate the skyline. The local Titchfield Hotel was the place to be seen for wealthy visitors seeking a bit of winter sun. One in particular, Alfred Mitchell from Connecticut, was so taken by the place that he chose to build a winter home for himself and his wife Annie, a member of the Tiffany family.

The costly undertaking resulted in a magnificent mansion house with an indoor salt-water pool, private power station, and cupola room for admiring the view. The grounds were cultivated as a tropical garden, which thrived in what is the wettest parish in Jamaica.

However Mitchell died just six years after its completion and his wife sold up and left two years later. The new owners didn’t stay long either and the property ended up abandoned only 12 years after it was built. There was a brief moment of relief when the famous actor Errol Flynn considered buying the house. However, the Jamaican Government had taken over the property by then, and only offered a lease.

The slow decline into ruin began under government management. As with so many of the older grand houses of Jamaica, neglect and looting accelerated mother nature’s work. By 1935 the roof had fallen in as a consequence of the supporting structure being looted, and the wooden floors were long gone. 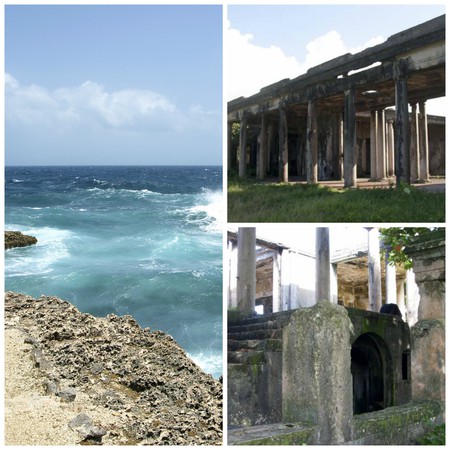 Local legend has it that the use of salt water in the concrete was the cause of the building’s ruin. There is no evidence of this; in fact the concrete portion of the structure is the only part that remains.

Folly Ruins offer an atmospheric reminder of times gone-by. Fenced off for safety reasons, it is still possible to visit the site and marvel at what must have been a magnificent property.