11 Ingredients You Will Find in a Jamaican Kitchen 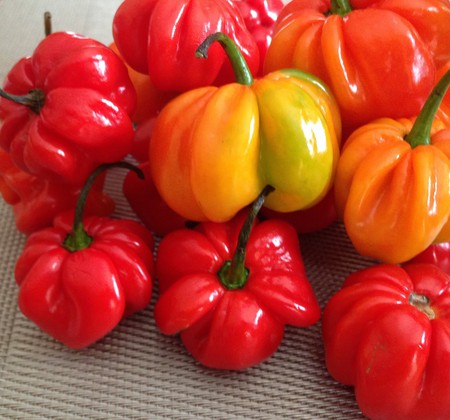 Jamaica’s motto — ‘Out of Many, One People’ — speaks of the multicultural roots of the Jamaican people. Jamaicans have African, European, Indian, Chinese, Middle Eastern and South American heritages — sometimes all in one household. The food found in Jamaica reflects this rich heritage in its variety and flavour — a blend of local staples with a selection of exotic seasonings and preparations. Here are 11 ingredients you will find in a Jamaican kitchen.

Brought to the island by indentured servants from East India during the British colonial period, curry has been embraced and ‘localised’ in Jamaica. There are some subtle differences between Indian and Jamaican curry powders — notably the addition of allspice locally. However, most people will use store-bought powder rather than homemade. Popular local dishes include the ubiquitous and delicious curried goat; curried shrimp (available at every seafood restaurant); and that lunchtime staple — chicken patties, in which the chicken is curried. 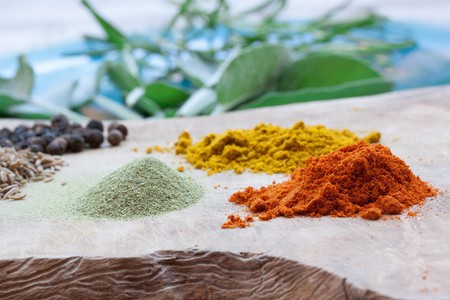 Dried pimento berries look like large dark peppercorns and are a staple of jerk cooking. Pimento wood is often used to smoke jerked meat — the sticks are placed over the heat, the meat (usually chicken or pork) sits atop the wood and is sealed by a metal lid, thus infusing the meat. The berries are also used to make jerk seasoning or rub. The ground berries, otherwise known as allspice, can be found in virtually every kitchen across Jamaica and the Caribbean. 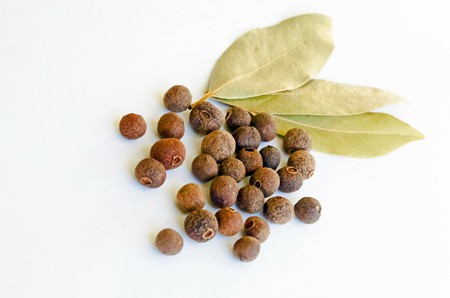 One half of Jamaica’s national dish, saltfish is traditionally made from white fish such as cod that has been cleaned and filleted and dried before being salted to preserve it. Purchased in large chunks in Jamaican stores, it must be soaked overnight to remove most of the salt before cooking. It’s often served at breakfast and a favourite preparation is saltfish fritters, known locally as stamp and go. The saltfish is seasoned, mixed with escallion and a batter mix before being pressed and fried. This is proper local fast food, made to go.

The other half, along with saltfish, of Jamaica’s national dish. Ackee trees can be spotted growing across the island — notable for their large red fruits. Great care must be taken in the preparation of ackee as parts of the fruit are poisonous — so if you’re not familiar with how to safely prepare it, stick to shop bought. After the fruits have opened naturally, the yellow flesh is removed, cleaned and boiled. Often seen sold in small bags by roadside vendors, ackee is also available in cans at the store. It looks a lot like scrambled egg, but has a somewhat plain taste if not seasoned. Often eaten for breakfast, ackee is usually seasoned and complemented with onion, tomato, and of course, some scotch bonnet. 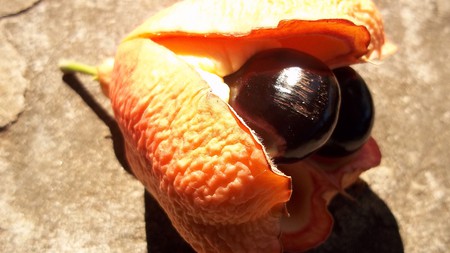 A small brown nutty legume, gungo peas are a staple of Jamaican cuisine. Usually purchased from the dry goods department in large bags, they can also be found tinned which makes for easier preparation. They are used mainly for gungo pea soup, a thick vegetable and dumpling soup, often made with beef. They also make a seasonal substitution for kidney beans in rice and peas at Christmas time — bringing variety to a year-round Jamaican staple.

The supermarket vegetable aisles always have large containers of fresh locally grown tamarind. Tamarind is common across the tropics where the season is usually around March. Tamarind is used to flavour sauces, although most people will prefer tamarind balls — a sticky sweet made of balls of tamarind flesh rolled in sugar. In true Jamaican fashion, they are often spiced up with hot pepper and then ‘treated’ with dark rum. Delicious. 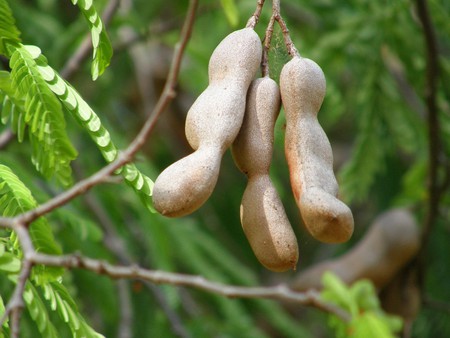 This leafy green plant grows everywhere in Jamaica, in fact it isn’t unusual to see people picking it at the side of rural roads or from their own gardens. Callaloo is the most common leafy green grown in Jamaica and the Caribbean and is therefore a staple of many recipes. Callaloo can be simply chopped and boiled, although it benefits from being seasoned and is best used to accompany something spicy such as saltfish fritters. Otherwise it is commonly seen at breakfast with onion and tomato.

Some evenings, the warm still air in the neighbourhood is richly scented with scotch bonnet as families prepare their evening meals — such is the prevalence of this small but powerful pepper. Grown in yards all over the country or purchased in small bags at the supermarket, scotch bonnet peppers look like mini bell peppers, but pack a powerful punch. Drop one whole into a stew pot or soup and leave to simmer (just remember to remove it before eating), or finely chop one up and use to make a jerk rub. Some restaurants leave a small saucer of the pepper on the table for diners to chop and apply to their own taste. 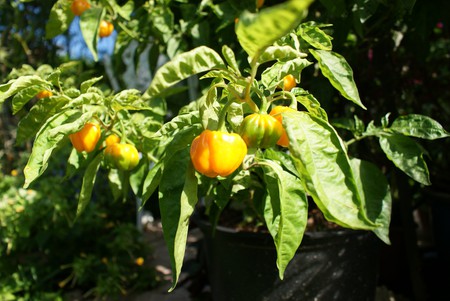 An old-school store-cupboard staple, cornmeal is cheap and versatile. Cornmeal porridge; cornmeal pudding; turned cornmeal; at its most basic level cornmeal is added to hot water and simmered and stirred. But that would make for an awfully plain concoction so cornmeal is usually heavily seasoned and added to a variety of chopped vegetables and herbs with some heavy seasoning. The pudding is actually really delicious and made with coconut milk, raisins and nutmeg before being baked.

Walking in the Blue Mountains, it is possible to stumble across wild ginger growing at the side of paths and among the trees. Usually it will be cultivated by a local farmer for market. Ginger is used in numerous Jamaican recipes to flavour and season dishes. A favourite preparation is to use it when making Sorrel, a Christmas drink in Jamaica made from sorrel with rum, sugar, ginger and cloves or pimento with a dash of lime. This deep red coloured beverage can be found in every home and at every party during the holiday season. Otherwise, ginger is often used in medicinal tonics or just added to boiling water for digestive ailments. 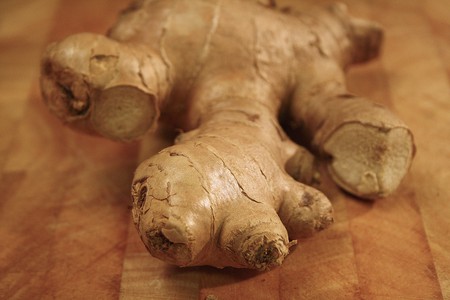 From the tree of life, coconut provides so much to Jamaican cuisine — and life in general. Buy a jelly (as the young nuts are known in Jamaica) at the roadside and the vendor will chop it and push in a straw so you can drink the water. Coconut oil — one of the healthiest oils known — is sold by the litre in supermarkets and used for cooking, just as with any other oil. Cans of coconut milk line the store shelves and are commonly added to curries, puddings, or used to prepare rice and peas. Basically, coconut in one form or another is consumed daily across Jamaica. 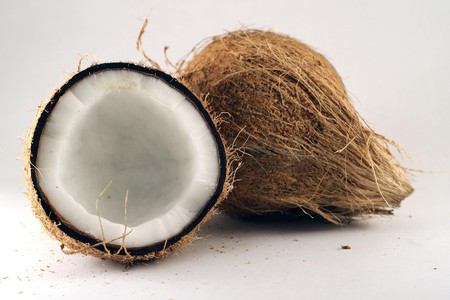 Coconut | © Hafiz Issadeen/Flickr
Give us feedback