10 Films to Make You Fall in Love with Jamaica 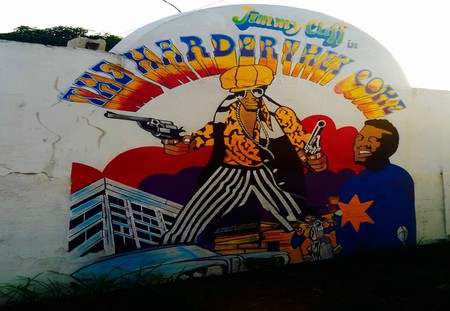 The Harder They Come | © CaribbeanCables/Flickr

Jamaica is different things to different people — and movies featuring Jamaica tend to reflect that. From British movies in the 1950s featuring pirates and colonialism to portrayals of social justice and crime, films set in Jamaica are varied in nature. Here are 10 of them to make you fall in love with Jamaica.

One of the greatest Jamaican films of all time and a cult classic for anyone who knows Jamaica is Countryman. The film is dedicated to Bob Marley and the Wailers, and the soundtrack is by that giant of Jamaican music Lee ‘Scratch’ Perry. Countryman, after whom the film is named, plays a Rastafarian fisherman who rescues two Americans from a crashed plane and helps them evade the authorities as some local political intrigue plays out. The film really showcases rural Jamaica and the peaceful message of Rastafariansim — especially when Countryman holds forth with his regular words of wisdom.

Featuring several Jamaican music legends including Leroy “Horsemouth” Wallace, Burning Spear, Gregory Isaacs, Big Youth, Dillinger and Jacob Miller, this film is a real snapshot of Jamaica as it was. This is a Robin Hood tale of social justice empowered by music — something every Jamaican can relate to.

Smile Orange is a classic of the 70s — satirising the eminently risible tourism business which plays such an important role in Jamaica. The lead character, a hotel waiter known as Ringo, is a bit of a chancer and conman who somehow manages to hang on to his job despite a series of ill-advised escapades. Featuring some fabulous orange waistcoats and flared trousers, this is a genuinely funny film and shot entirely in Jamaica.

This documentary about roots reggae and Rastafarian culture took a few years to make but is intended to be the definitive film on the subject. It features interviews with a range of well-known Rasta reggae artists. Holding On To Jah is indeed a fascinating insight into Rasta culture and the important role of music within that. Filmed in Rasta communities across Jamaica, the film is a must-see for anyone wanting to learn more about roots reggae and Rastafarianism.

This documentary about Jamaica’s music gets beneath the surface as it follows some of the country’s reggae and Dancehall artists. Released to critical acclaim at the 2006 Toronto International Film Festival, Made in Jamaica is an energetic look at Jamaica’s culture of music and at Jamaican society itself. The live music performances are outstanding, and despite some critics feeling that the film skates over some of the deeper societal issues raised by the film, there’s enough exposure to some of the issues to prompt further exploration by keen viewers. What is really captivating though are the scenes filmed in downtown Kingston — neighbourhoods most people watching the film will never visit.

A real icon of Jamaican film, The Harder They Come is as relevant today as the day it was made. The story, based on true events of the time, involves the protagonist travelling from the country to Kingston seeking his fortune in music. Hard reality bites and our hero slips inexorably into a life of crime from which he is unable to escape. On the run from the police, he eventually meets a violent end. The film stars that icon of Jamaican music, Jimmy Cliff, who also had a massive hit with the eponymous title song.

Marley is a documentary about the life, music and legacy of Bob Marley. This documentary, made with the support of the Marley family, is beautifully shot and features plenty of footage of Marley and interviews with his contemporaries. This is the definitive account of an icon, and an immersive introduction to his timeless music.

Inspired by the true story of the first Jamaican bobsled team, Cool Runnings is a classic comedy that has become a modern Jamaican cultural reference. Everybody knows the film about four plucky Jamaicans who travel to Calgary for the Winter Olympics, overcoming numerous hardships and challenges on the way. There is now even a Kool Runnings water park and a bobsled ride (on tracks) in Jamaica. If you happen to be in Calgary, the real bobsled used by that actual team sits outside the reception of the Calgary Olympic Park. An underdog comedy with Jamaican spirit.

Ian Fleming wrote the James Bond novels in his home, Goldeneye, on the north coast of Jamaica near Oracabessa. This was the first to be made into a movie. Shot largely in Jamaica, it remains possible to visit many of the original locations such as the Liguanea Club in Kingston that stands in for Queen’s Club in the film; and The Grand Port Royal Hotel where the bar scene was shot. Perhaps the most iconic scene is when Ursula Andress walks out of the sea wearing a bikini and a dagger at Dunn’s River on the north coast.

This is an 80s classic from Tom Cruise’s golden years. Our final film is nothing other than cheesy, stylish fun with neon lights. Two guys, Cruise and Bryan Brown, working as barmen in a Manhattan cocktail bar, decide to move to Jamaica to pursue their dream. There’s some outstanding scenes filmed on the north coast around Frenchman’s Cove and the Blue Lagoon, showcasing some of the best public beaches on the north coast of the island. It’s okay to still love the 80s.