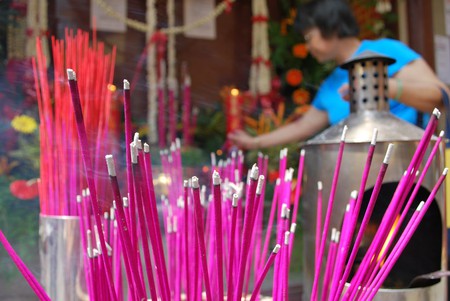 The large temple complex of Wat Maha But in Bangkok has several ornate buildings, many statues of the Lord Buddha, pagodas, small shrines, and leafy walkways. One shrine in particular attracts a lot of interest, especially from pregnant ladies.

Local lore tells of a beautiful young lady, called Nak, who lived happily in Bangkok’s area of Phra Khanong with her husband, Mak. The story took place some 100 years ago. The couple was delighted to know that Nak was expecting a baby, but the joy was shattered when Mak was conscripted for military service. While Mak went off to war, Nak stayed at home, waiting for the birth of their first child. Mak was injured and his homecoming was delayed. As he fought for his own health, Nak went into labour.

Nak and her baby died during childbirth. Even in death, Nak’s love and devotion for Mak is said to have been so strong that her spirit could not leave their family home. She continued to live in the house, as a ghost, caring for her ghostly child. 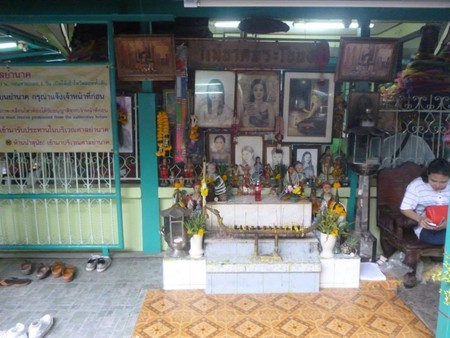 Legend says that Mak finally returned from war, unaware that his wife and child were dead. He returned home to find his loving family waiting for him and resumed family life in complete ignorance of the fact that he was living with spirits. Stories say that anybody who tried to tell Mak the true situation mysteriously died.

One evening, as Nak was making dinner, she inadvertently showed Mak that she was no longer a mortal being. The terrified Mak waited for Nak to sleep and ran away, hiding from her behind a tree said to be feared by Thai spirits and eventually seeking refuge in Wat Maha But. Nak was overcome by sorrow and rage at losing her beloved husband and unleashed a wave of terror on the village.

With the help of a shaman, the villagers finally managed to capture Nak’s spirit; her soul was trapped in a stone jar and thrown into the canal, restoring peace along the banks of the Phra Khanong Canal. 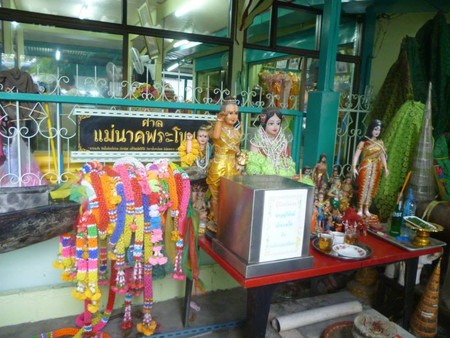 Years later, it is said that Nak’s spirit was released. Some stories tell of the jar being found when fishing and opened accidentally. Other tales tell of Nak’s spirit having been trapped in a piece of fabric, which is in the safe possession of the royal family. Another version is that Nak was persuaded to rest in peace to await Mak in the next life.

A shrine was erected in Nak’s honour, located in the grounds of Maha But temple. A fairly simple building, it has many pictures of what it is thought Nak looked like. Outside, along with a wall of pictures, there is an old wooden Thai boat draped with colourful ribbons and flower garlands. There are several nice dresses and donation boxes too.

Inside the shrine, you’ll find statues devoted to Nak and many more pictures. There are rails of exquisite Thai dresses, many still covered with plastic, brought as offerings to the ghost. To the side of the main shrine is a smaller area devoted to Nak’s child. Brand new toys and children’s clothes fill the area, left to remember the soul of the child who died before their life on Earth even fully started.

Offerings of flowers, money, food, drinks, and incense are also left in the shrine. People pay their respects to Mae Nak to keep her spirit calm and to seek blessings. 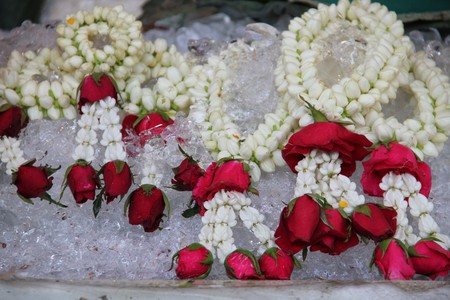 The shrine is particularly popular with people who wish to avoid the military draft. Before the annual military lottery each April, the shrine is a hotbed of activity, with young men, young wives, and family members fervently praying for Mae Nak’s intervention.

The Shrine of Mae Nak also attracts large numbers of pregnant ladies. Making merit, leaving offerings, and praying here is seen as a way for pregnant women to try to ensure an easy, pain-free, and complication-free childbirth, believing that Mae Nak will protect them from suffering a similar fate to her.