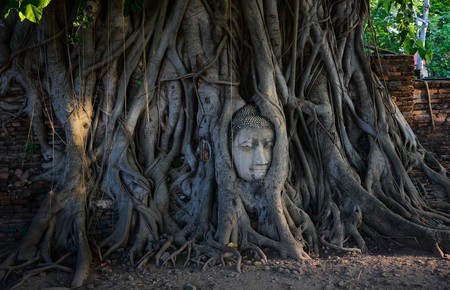 Thailand has no shortage of awe-inspiring statues, but few leave a lasting impression in the way that Wat Mahathat’s root-covered Buddha head does. Located in Thailand’s former capital Ayutthaya, here’s a little more about the head and the city’s fate.

At around 80 kilometres (about 50 miles), or an hour and a half from Thailand’s capital city Bangkok, Ayutthaya makes for a popular day trip for those looking for a spot of culture found beyond the walls of the Grand Palace. Under Thailand’s baking sun, the historic city hosts thousands of domestic and foreign visitors every day. The grandeur of the now-ruinous temples and statues can set the mind wondering just how much of a spectacular place it was in its heyday, but attentions and thoughts soon turn towards the present when tourists come across its most famous feature. 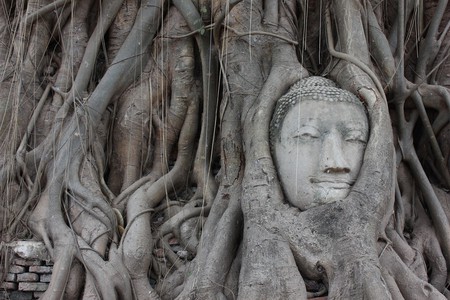 Under the watchful eye of a guard throughout the day, the Buddha head growing amongst the roots of the banyan tree is one of the most recognisable images of Ayutthaya and of Thailand in general. A striking sight with an enduring effect, it’s speculated that it was entwined in the roots after a thief placed it there and never returned, but its origins could also be traced back to the 18th century, when the city itself was razed to the ground during war.

A City Razed to Ruins 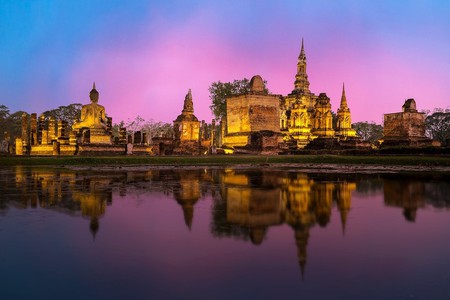 Founded in 1350 and becoming the second capital of Siam — now modern-day Thailand — after Sukhothai, Ayutthaya was thought to be the largest city in the world, with one million inhabitants, and was home to a number of awe-inspiring temples. Ayutthaya was also a trading hub that connected Asia with the West. Siam had frequently clashed with the Burmese Kingdom throughout its history, and were defeated in 1767. Following a long siege, the city of Ayutthaya fell to the Burmese and was razed by the invading forces, with its temples, statues and records all destroyed in the process. The city was left broken, abandoned and plundered, but was brought back to life by the Thai government in the 20th century. 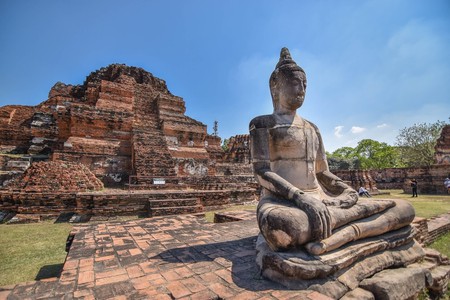 Whilst the thief responsible for taking the Buddha head to the roots might not have been successful in his attempt to steal artifacts, others unfortunately were. With gangs of looters growing in frequency, the Thai government acted in the mid-20th century to protect the ruins and its heritage. The Department of Fine Art began restoring and protecting the city and, whilst the damage the Burmese inflicted on the city cannot be undone, it ensured that the city wouldn’t fall into further disrepute. The department provided the world with stunning examples of Khmer architecture, artwork and mysteries that may never be solved, but will be speculated on during the years to come.