'Uncle Boonmee Who Can Recall His Past Lives': the First Southeast Asian Cannes Winner 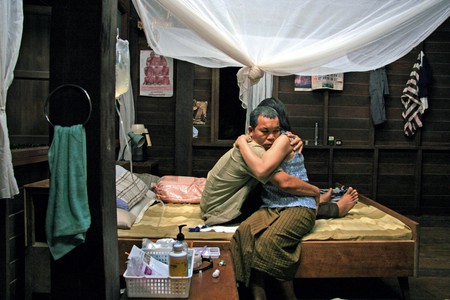 The Thai film Uncle Boonmee Who Can Recall His Past Lives was the first ever Southeast Asian film to win the prestigious Palme d’Or at Cannes. Here, we look at this beguiling and surreal movie dividing critics and audiences.

Thai director Apichatpong Weerasethakul’s Uncle Boonmee Who Can Recall His Past Lives, is characterised by the dissolving sphere of time, and invokes configurations of memory as an exploration of collective amnesia. Apichatpong challenges the notion of filmmaking, leaving a thread of puzzling, intoxicating images which seduced the audience when it premiered in the Cannes Film Festival in May 2010. The scent of the tropics lingers boldly throughout this atmospheric film, and it became the first Southeast Asian film to win the prestigious Palme d’Or – the highest award in the festival.

As the film starts to roll, we are drawn into a visual narrative of landscapes; we travel with the characters, Uncle Boonmee and his sister-in-law, Jen, while they look out of the car window and revel at the sight of rural life in Northeast Thailand. We are being transported to Nabua, near the border of Laos, an Isan village with a history of marginalisation and conflict. The history of the communist persecutions in the 1960s and 1970s pulsates loudly against a natural backdrop.

A breathtaking journey unfolds as Boonmee then reconstructs his traumatic past. He suffers from terminal kidney failure and is forced to reflect on his past as he approaches death; Apichatpong’s father died from the same condition. Time is perceived in the setting as a remnant of a fleeting experience influenced by the vagaries of memory. Despite demands for freedom, Nabua remains a scarred land. The society continues to manifest collective amnesia, turning a blind eye to previous events.

The audience is, however, made to understand the confrontations of the past, present and afterlife through Uncle Boonmee’s encounter with his dead wife, Huay, his lost son who resembles a Monkey Ghost with glowing red eyes and surreal recollections of a princess talking to a catfish. These magical encounters explore local tales of endless love, worldly desire and broken hope. With the characters’ dreams recurring throughout the film, Apichatpong is able to blur the dimension of death and reincarnation when Uncle Boonmee bids farewell to the ensemble of characters in a cave. Time and memory is interlinked with the symbolic notion that we cannot escape our destiny. In mythical iconography, the cave is a symbol for rebirth, an underworld to pass through before reincarnation.