Top 13 Things to See and Do in Nakhon Ratchasima Province, Thailand 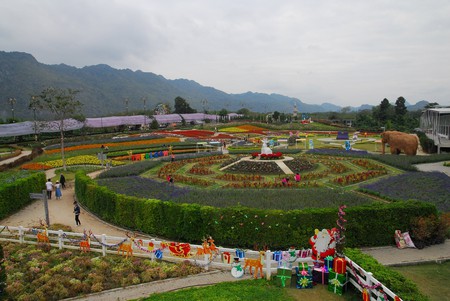 One of Nakhon Ratchasima's many flowery farms | © Thanate Tan / Flickr

Nakhon Ratchasima is Thailand’s biggest province. Located in Northeast Thailand, an area also known as Isan, and covering almost 20,500 square kilometres (7,915 square miles), the province combines beautiful nature with interesting Khmer-era culture and history. With plenty to see and do, here are some of the best experiences in Nakhon Ratchasima. 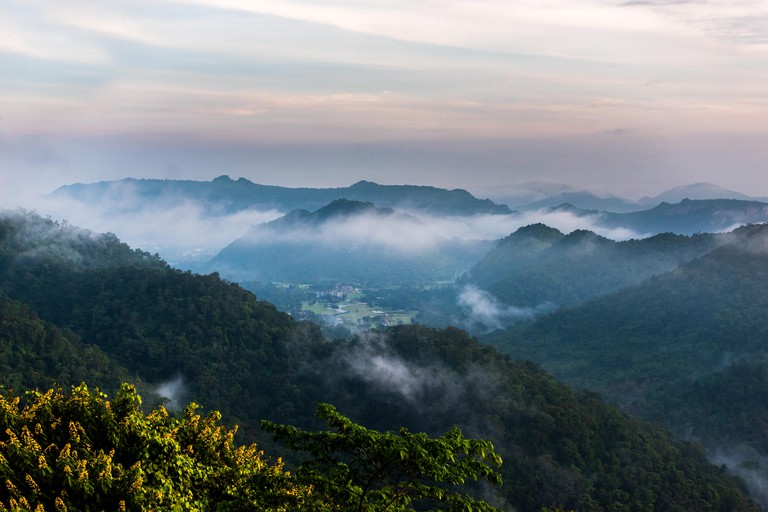 © SITTITAP LEANGRUGSA / Alamy Stock Photo
One of the most-visited national parks in Thailand, the beautiful Khao Yai National Park is home to various flora and fauna and provides terrific views of the surroundings. Creatures that call the park home include elephants, gibbons, macaques, deer, bears, lizards, and numerous bird species. Among the park’s impressive waterfalls, there’s one that was made famous in the hit film The Beach: Haew Suwat. Heaw Narok, one of the tallest in Thailand, is another waterfall to add to your Khao Yai list. There are walking trails of different lengths and difficulty levels, and there are well-maintained roads through the park if you prefer to explore by wheels. 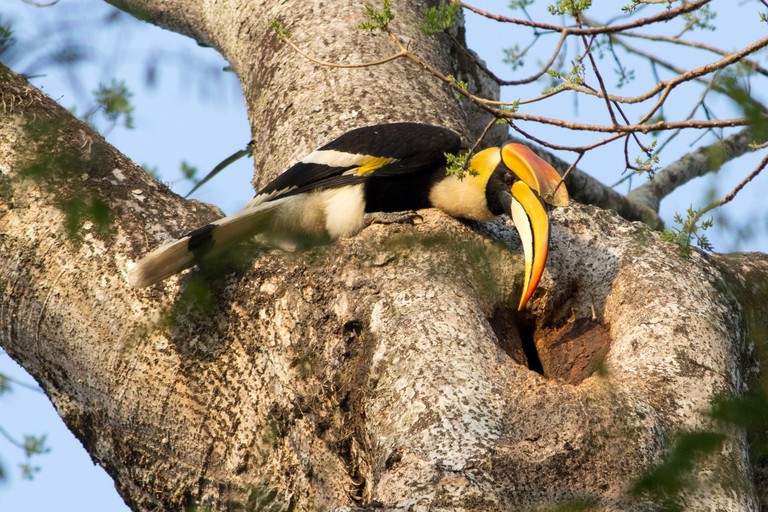 Hornbills are among the birds that live in Thap Lan National Park. | © Sebastian Heil / Flickr

Nakhon Ratchasima’s lesser-visited national park, Thap Lan National Park is the second-biggest national park in all of Thailand. The terrain includes stretching mountain ranges, gaping valleys, waterfalls, and wildlife-rich forests. Although the headquarters is located in the neighbouring province of Prachinburi, there are several access points in Nakhon Ratchasima too. There are many fan palms in the national park, which are considered sacred trees, as the Buddhist scriptures were written on fan palm parchment. Wild animals include buffaloes, elephants, bears, gibbons, monkeys, and birds. It is thought that tigers and the incredibly rare kouprey still roam the forests. Head to Pha Keb Tawan to shoot large seeds off the cliff using gigantic catapults; maybe they’ll take root and add to the blanket of greenery below.

The Lam Takhong River flows through diverse scenery that includes forests, orchards, and farmland. A gentle river, it offers an easy rafting experience for families and beginner rafters. It is a grade 1–2 river. During the hot season, the water levels are not suitable for enjoyable rafting; the best time to raft at Lam Takhong is during the rainy season when the river is at its fullest and fastest.

Sai Ngam is located in the small town of Phimai. An unusual and slightly eerie destination, it is one of the biggest banyan trees in Thailand. More like a small wood or forest than a single tree, branches create a shady canopy overhead and roots have sprawled to create more tree-like growths. Banyan trees are said to attract spirits in Thai beliefs, so it’s little surprise to find numerous spirit houses throughout the extensive tree system. There are also lots of places where colourful ribbons have been wrapped around the tree to show respect. 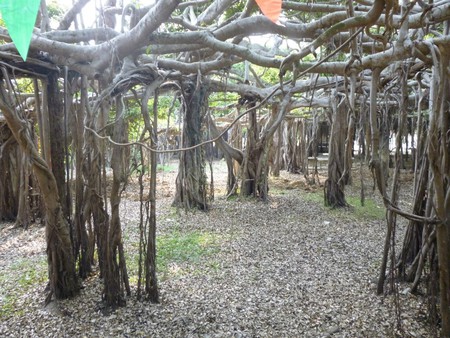 Inside the huge banyan tree of Sai Ngam | © Sarah Williams

Wang Nam Khiao is a picturesque district in southern Nakhon Ratchasima. Often referred to as “The Switzerland of Thailand”, the lush mountainous area is also famous for its high quality of air. Vineyards, wineries, orchards, and organic farms are among the scenic attractions. Other great places here include Montana Farm, with its cute buildings, friendly sheep, and whimsical features, Mister Mushroom, which teaches visitors all about the mushroom-growing process, and Flora Park, which blooms into a riot of floral colour between December and February. Enjoy long walks in nature, soak up the sense of tranquility, and visit the interesting and unusual local attractions. 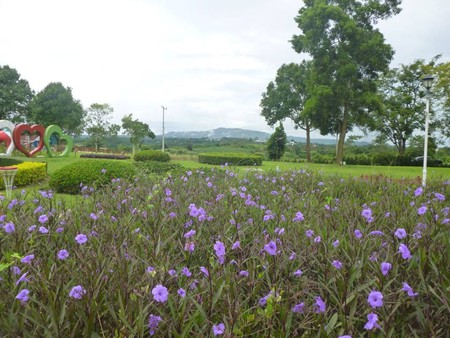 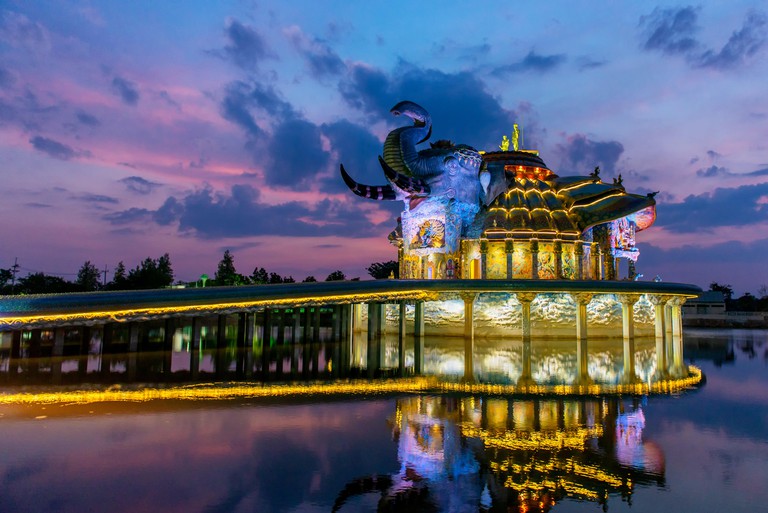 Located in the district of Dan Khun Thot, Wat Ban Rai is among Thailand’s most spectacular and vibrant temples. It started life as a modest monastery but was developed in honour of the late abbot, Luang Phor Khun, who was highly respected in the area. The highlight is a gigantic ceramic-covered elephant-shaped shrine that is built over the water. Walk around the outside to admire striking statues and intricate mosaics that depict Buddhist stories and interpret sacred texts, and step inside to be wowed by more beauty. On top of the shrine stands a Buddha statue and a golden image of Luang Phor Khun. Two large naga statues guard the entrance to the shrine’s walkway.

Step back in time at Phimai Historical Park 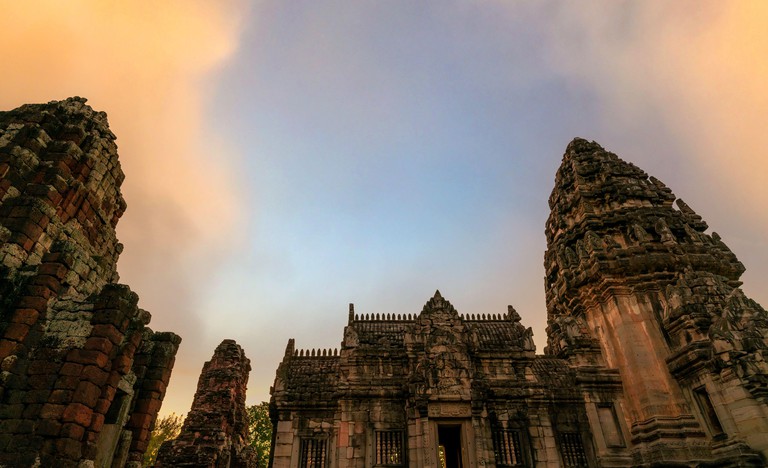 Often referred to as a mini Angkor Wat, Phimai Historical Park is one of the biggest Khmer-era temples in Thailand. It stands at the point that was once the end of an ancient highway from Angkor and dates back to the 11th and 12th centuries. Built from laterite and sandstone, the large ruins contain images, statues, and symbolism related to both Buddhism and Hinduism. Historians believe that it was mainly used as a Buddhist place of worship, due to locals practicing Buddhism, despite the Khmer being Hindu. The complex has towers, prangs, pagodas, high walls, courtyards, ponds, moats, and other features. The nearby Phimai National Museum is a great addition for those who want to know more about the area’s rich past.

Found in Nakhon Ratchasima’s district of Non Sung, Ban Prasat Archaeological Site is one of Thailand’s most significant archaeological sites. The area is thought to have been inhabited for some 3,000 years and skeletons and objects have been found here from the Bronze Age and Iron Age. Now turned into an open-air museum, visitors can discover more about the ancient people who once lived here and peer down into the large pits to see burial sites and excavated items.

Have family fun in Pak Chong 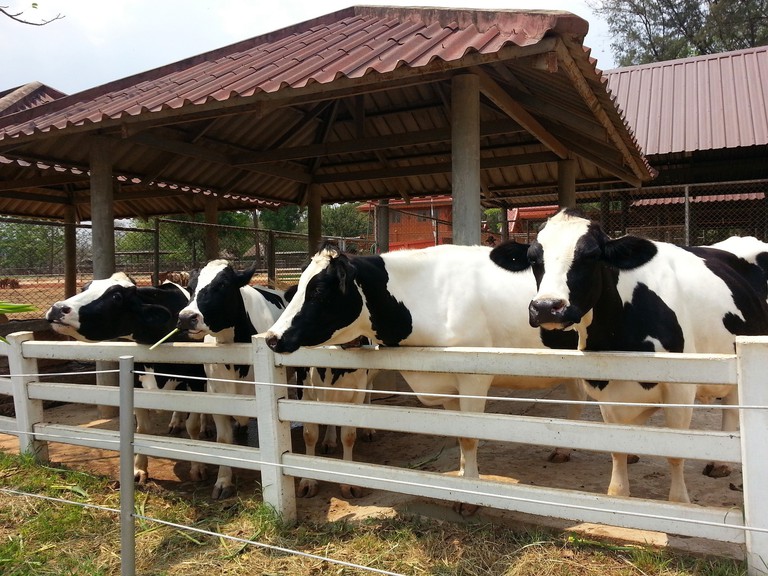 Farm Chokchai started life as a working farm, growing to become an agricultural attraction. People can learn more about farming in Thailand and take a tractor tour of the lush farmlands. See all stages in the dairy process, meet the herd of cows, and have a go at making your own ice cream. There are horse-back demonstrations and you can watch the skills of sheep dogs as they herd their flock. There’s a children’s play area and a mini petting farm with animals like rabbits and goats. The onsite restaurant is often said to serve the most delicious steak.

Thongsomboon Club has novel accommodation options; spend the night in a teepee, wagon, caravan, or something else! You don’t have to stay here, though, to have fun; the adventure park is also open to day visitors. Wander the Wild West-themed areas, complete with saloons and shows, admire the scenic views, and enjoy diverse rides and attractions. There’s a log flume, flying fox, luge, sky lift, dry ski slope, and steam train, as well as bumper boats, laser tag, and a dry sledge. Activities include horse riding, zorbing, BB Gun shooting, buggy driving, ATV adventures, and go karting.

The provincial capital, also called Nakhon Ratchasima but frequently referred to as its former name of Khorat, has much to enjoy. Maha Viravong National Museum, within the temple of Wat Sutthachinda, has a small collection of Buddha statues and artefacts. Korat Fossil Museum has information about prehistoric finds, including a large elephant graveyard and dinosaurs. The cave-like Wat Phayap, Wat Sala Loi, and Wat Phra Narai Maharat are among the city’s most revered temples, and the large Ya Mo Monument is worth a quick photo stop. Nakhon Ratchasima Zoo, complete with its own water park, is great for families, and Ratchasima Mall is sure to appeal to shopaholics. Visit the 100-year-old Meuang Ya Market for a tasty selection of Thai and Isan fare. 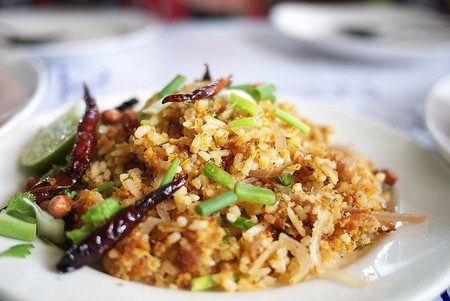 Although Nakhon Ratchasima is nowhere near the coast, that doesn’t mean that you can’t enjoy the beach! The large and sandy Chom Tawan Beach was created alongside the lake as a place where people can enjoy various leisure and relaxation options. Swimming is possible in the refreshing waters or you can sunbathe on the shore, explore walking trails, rent a boat, and discover nearby caves.