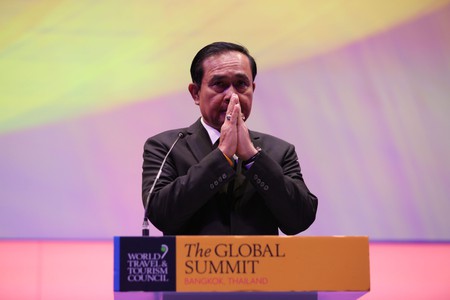 Not content with controlling what the public reads online and watches on TV, Thailand’s Prime Minister Prayuth Chan-ocha has turned his hand to another of his talents — songwriting. His latest single, Diamond Heart, went viral on Valentine’s Day, but it failed to sweep people off of their feet. Here’s more about the junta chief’s softer side.

For most people, having a single go viral is beyond their wildest dreams, but for Prayuth it’s already turned into something of a nightmare. Released a week before Valentine’s Day, it contains cheesy lyrics such as “Did you know your smile is my happiness?” and “No matter how tired and difficult, let’s hold hands” that have proved wildly unpopular with the Thai populace.

On YouTube, the song has amassed 37,000 dislikes compared to just 2,000 likes, and whilst the comments section is disabled, it didn’t stop users taking to Twitter in order to ridicule the song and its themes. The song itself is dated, as a rock ballad with a heavy emphasis on the guitar, and was sung by an army officer rather than the Prime Minister himself. Diamond Heart is the fourth single that Prayuth has released, and carries similar themes to those of his other songs.

Since being installed as the Prime Minister in 2014 after a military coup, Prayuth has released a number of songs that champion Thai unity and aim to portray the junta in a more positive light. His debut single, Return Happiness To Thailand, was released after the coup and gained a lot of radio airtime. Its lyrics asked the people to give his government time to deliver their promises, and reassured them that they would “take care and protect you with our hearts” and that they’d return happiness to the people. Unlike his most recent effort, Return Happiness To Thailand topped the Thai music charts and was well-received and catchy. His other songs, Bridge, Because You Are Thailand and Hope and Faith carry on the themes of togetherness and unity.

Whether or not Prayuth’s songs are your cup of tea, to speak out against them in public is an act of bravery. In March 2017, an activist was arrested over a Facebook post he made mocking the Prime Minister’s song Return To Happiness, as online criticism of the government or the regent are considered serious crimes in Thailand. However, day by day frustrations towards the lack of democratic elections in the country and the ruling junta grow. Elections have been postponed numerous times, and the reception of Prayuth’s Diamond Heart song suggests that the Thai people may be fed up of the status quo and might prefer a ballot to a ballad.