Eating These 7 Thai Desserts May Bring You Good Luck 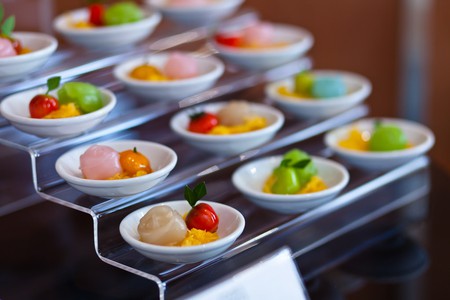 Food and fortune are inextricably linked in Thailand, with the belief that what you chew can have an effect on your prospects down the line. So if you’re feeling like life isn’t quite going your way, there may be a trick to chowing down on one of these luck-enhancing sweet treats.

The word fu means ‘to increase’ in Thai, and those devouring this dessert hope to gain prosperity by doing so. In addition to bringing the eater success, tuay fu also have a sweet aroma because of the addition of flower juice. These Thai steamed muffins are made without the use of an oven; instead, they’re put into a steamer until ready. The dessert is made up of a few different ingredients, including rice flour, sugar, and yeast.

Thong means gold, and devouring this dish is supposed to make the eater more wealthy. This is one of the most popular Thai desserts. The golden balls are made with the duck egg yolks combined with rice flour, brown sugar, and jasmine water. 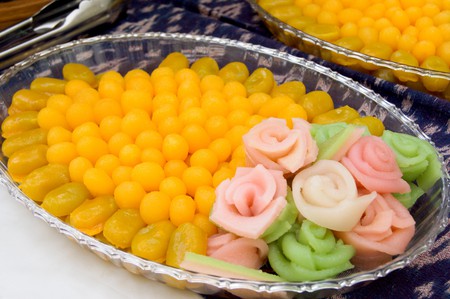 Med Kanoon is a sweet, smooth dessert. One of the reasons it is served at celebratory events, like weddings, is in the hopes of granting the new couple smooth sailing in addition to a sweet life. The list of ingredients that make up this dessert is not particularly extensive. All happy couples need in order to prepare med kanoon is moong dal (split yellow mung beans), salt, white sugar, coconut milk, egg yolks, pandan leaf, and water. 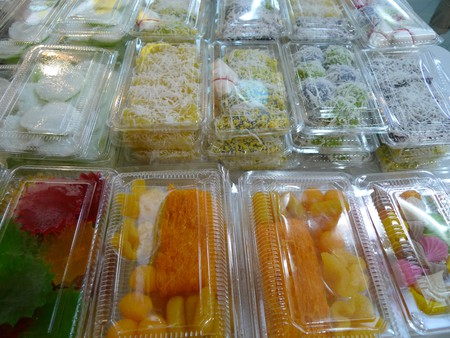 Egg makes an appearance in many Thai desserts, and foy thong is no exception. Thong meaning gold, it is believed that this dessert will grant the eater a longer life. This sweet shredded egg yolk dessert has to be made in two separate parts, which leads to a slightly longer cooking time, but it’s definitely worth it. It is easy to spot, as it is bright orange in color and certainly more vibrant than other desserts. 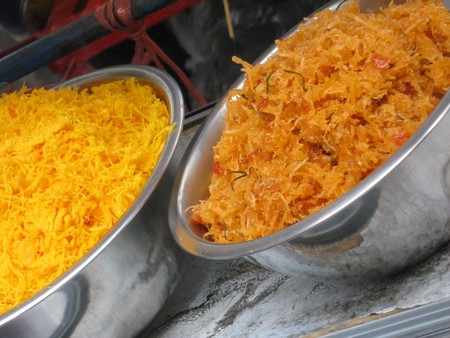 Khanom chan is a traditional Thai dessert generally served at auspicious events, but is also readily available all year round. This two-colored, vibrant dessert is cut into small, bite-size cubes, each differing in color. It can consist of up to nine layers, with the layers stacked so that the colors alternate. Khanom chan is usually square-shaped, however, the dessert can be cut into different shapes and sizes for added decoration. 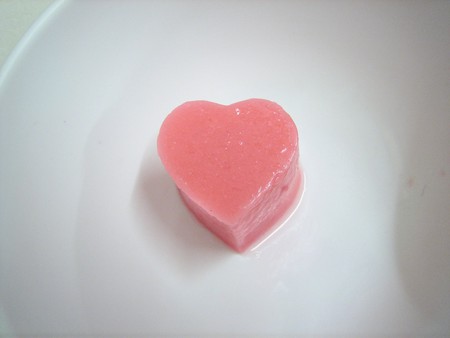 Ja mong gut takes some time and dedication to make, so it is a bit harder to find than some of the other desserts on our list. Hours of labor in addition to intricate carving make it a rare find on the streets of Thailand. This dessert is mostly made up of eggs, sugar, wheat flour, and coconut milk. For the most part, it is formed to look like a crown, as the word mongkut means crown in Thai. Those who eat it believe that it will help them in their professional careers, whether they move up in position or status or simply enjoy a stable work environment. 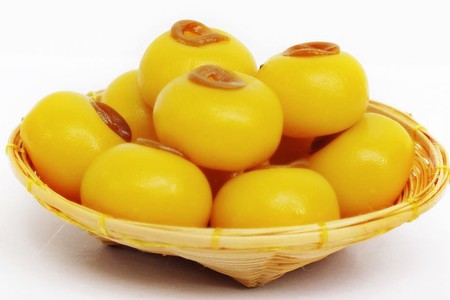 Thong yip is another dessert meaning gold. In Thailand, gold symbolizes fame and wealth. Yip means to pick something up, so this dessert predicts that everything you pick up will turn to gold. To make this dessert, egg whites and yolks are separated into two different containers. The yolks are whipped until they are thick. The yolks are then added to a syrup, which has to be made separately. Once they are finished cooking, they are spooned out and formed into star shapes for serving.