With its sumptuous combinations of flavours, colours and textures, it’s not a stretch to say that Thai cuisine constitutes a work of art. However, when it comes to Thai fruits, they’re quite often transformed into a literal piece of art — here’s more about it. 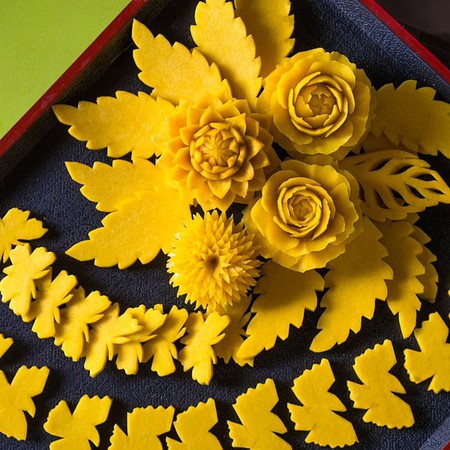 Known in Thai as kae sa luk, fruit carving is an art form that requires extreme dedication to learn the craft, carve the food perfectly and intricately, and obviously not to eat it as you’re going along. From shaping tomato skin into roses and turning cucumbers into flower petals, as well as transforming an apple into a swan, it’s an unmistakably Thai tradition that’s as beautiful as it is delicious. Whilst most fruits can be shaped in this manner, one of the most popular fruits to use is a watermelon. Soft to work with and deep enough to allow a fair amount of detail, it’s common to walk into fancy restaurants and hotels and see watermelons turned into wonderful works of art. These often include layered flowers, three-dimensional roses, and whatever the artists can come up with.

Carving a slice of history 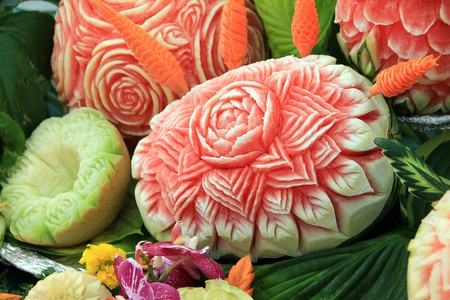 The carving of fruits and vegetables in Thailand isn’t a new phenomenon, but something that’s been happening for hundreds of years. The origins of the practice can be traced all the way back to the 14th century during the Sukhothai dynasty. However, rather than adorning breakfast buffets and restaurant tables, as in modern times, it was originally performed exclusively for royal families. Fruits were carved both for decorative purposes and for the food to look more appealing before it was eaten. Some tales attribute it to a royal servant looking to create a beautiful float for the Loy Krathong festival. Whilst the tradition’s popularity might have waned over the centuries, it’s not gone completely. Recent efforts to keep the art form alive might see it making a resurgence in the future. 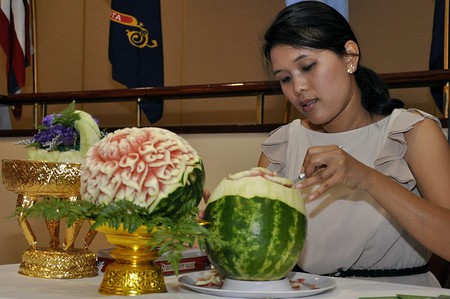 Amid real risk of losing the art form forever, the government moved to introduce fruit carving in education. Available as an optional subject in some schools, there’s hope that one day the practice will again be as widespread as it once was.

Although it’s thought by some experts to be a difficult trade in which to earn a profit in today’s world, there will always be space for talented artists in this medium. Aside from food carving competitions occurring annually in the Land of Smiles, carved fruits are also popular items to donate in temples and to present at weddings.