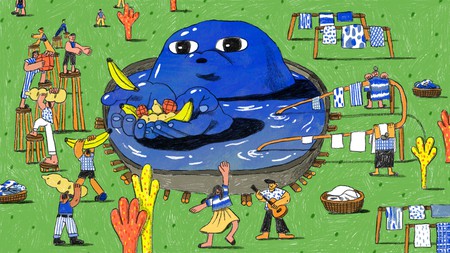 Far north in Thailand’s Sakon Nakhon province is a community that has practised traditional indigo dyeing for generations. The guardians of these brilliant-blue hues are the ‘indigo grandmas’, women who care for vats of colour-inducing microorganisms, which they believe to have souls of their own.

Fashion on the streets of Bangkok is a colourful, label-filled pastiche. From Instafamous teens posing in Siam Square to stilettoed fashionistas in luxury malls, each glamorous citizen aims to outdo the last. But as you travel further from Thailand’s capital, a different style story emerges.

Step off a one-hour flight from Bangkok to Sakon Nakhon province in the country’s northeastern Isaan region and you’ll see lush green rice paddies dotted with buffalo stretching to the horizon. Travel through quiet hamlets on roads not yet paved to pass small shops selling potato chips and Fanta, to places where when the occasional car or motorbike goes by, clouds of dust are left in its wake.

The province is home to just over a million people, despite being almost 10,000 square kilometres (3,860 miles) in size. It’s best known for its beautiful indigo dyes, made from the buds of the Indigofera tinctoria plant and used to colour traditional clothes and fabrics for centuries.

Rural farmers here have been repping the region’s workaday blues for generations. But recently, homespun indigo-dyed clothes have come into fashion, with dyeing schools, markets and shops that accommodate modern tastes popping up in Thailand’s bigger cities. The range of what’s available is impressive. Indigo-dyed suits, backpacks and teddy bears are for sale along the provincial capital’s Rueang Sawat Road, considered among the best spots for buying indigo items in the country. 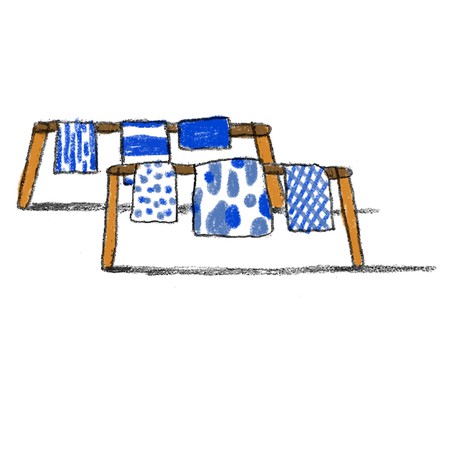 Baan Doy Kloy is a community of traditional indigo dyers in Sakon Nakhon’s countryside. A large, open-air tent is the workplace of approximately 20 women, many of whom have been handling the dye since they were small girls. For these women, working with indigo, or kram, is a calling as much as a job.

Baan’s founder, Tawil Au-pree, sits at her loom, her arms moving steadily as she talks in the humid afternoon heat. She explains that her artisans consider themselves caretakers of the dye. Here, the mixtures are not just a commodity, but are very much biologically alive.

Much like bread, kombucha or yoghurt starters, the vats teem with microlife and need to be fed daily. Indigo dye has a bit of a sweet tooth, thriving on a diet of bananas, tamarind and palm sugar. Because it is all-natural it is also edible – some artisans even taste-test the health of their brew. One sure sign that you’re in a disreputable spot (where the indigo’s been fortified with blue chemical dye) is if they won’t let you ingest it. Apparently indigo should taste gritty and vaguely sweet, and yes, it will dye your mouth blue.

Au-pree calls these dyers the province’s ‘indigo grandmas’. Each artisan uses her violet-hued hands to craft gorgeous textiles, and each one maintains a close relationship with her own personal batch. 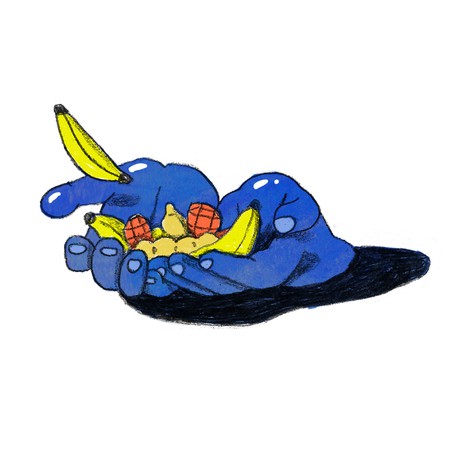 Au-pree has been working with indigo for over 50 years. She’s been amazed by the craft’s emerging popularity with both Thais and foreigners. “In the old days, we only sold this cloth for the house; it was not considered beautiful or worn outside,” she says.

Before founding her collective 10 years ago, each woman worked autonomously. Some struggled with knowing what to charge for items, haggling with buyers and suffering through lean times without sales. The point of the group was to provide these artisans with market power. Together, they can share design ideas and skills, feel a sense of community, standardise quality and pricing and teach the next generation.

Her plan worked. These days, she exports about half of the collective’s fabric, pillow covers and scarves to Japan, where a three-metre length of fabric can fetch a few hundred dollars or more. To a Sakon Nakhon local trading alone, that length might still fetch only $35 USD.

The group did not start as a money-making endeavour, explains Au-Pree, though a higher and much steadier income has certainly been a benefit. She distributes the profits to her crafters and invests in high-quality looms, equipment and marketing – in addition to encouraging her grandmas to teach young, emerging crafters. She likes to think of them as ‘indigo granddaughters’. 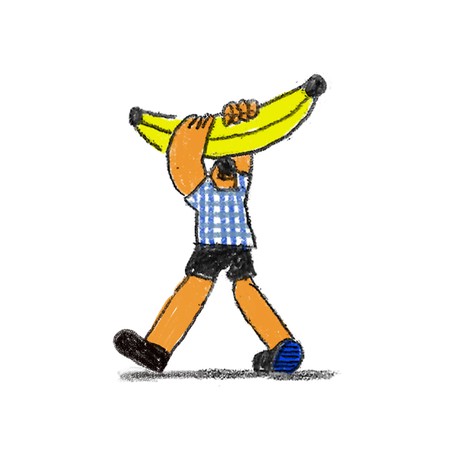 Those that work with the dye believe it to be alive, far beyond the biological realities of the bacteria. They believe each batch has its own soul. Artisans often sing to their vats to make them strong and happy, which is another way of ‘feeding’ them, alongside their daily diet of bananas and sugar. When the colour moves from pot to fabric, a part of this soul moves with it. Or so the belief goes – meaning that if you buy indigo-dyed clothing, you’re taking some life with you.

How the dye is fed (both literally and spiritually) affects the quality, colour and shade of the items. Each indigo caretaker knows her vats intimately, and it is this close relationship that helps them make instinctive adjustments.

After each use, the dye needs to rest and be fed, which is why one crafter may be surrounded by up to 15 vats. They know when a batch is ‘tired’, seamlessly moving on to the next. Each charge requires feeding, stirring and rest before it is ready to be used again.

According to Sakuna Saranant, another indigo expert in the province, the dye can be kept alive forever as long as there is someone around to care for it. Despite this, the vats often come to a natural end of their lifespan in this province.

“In Sakon Nakhon, all life is based on the rice harvest,” Au-pree explains. She adjusts her glasses and finally settles for a rest on the large floor mat by the tent’s entrance, which serves as lobby, lunchroom and social area. “At this time, people stop other work and everyone helps with the harvest. Our indigo often dies since no one is here to care for it.”

Though the vats may not be long for this world, sitting here among them is a calm and happy place of loving song, sweet fruit and sacred traditions. It’s a space humming with the quiet chatter of workers dressed all in blue. If you believe the traditional wisdom of these crafters, the dye never truly dies. It lives on, both its hue and soul soaked into indigo fabrics that have nourished this community for generations.