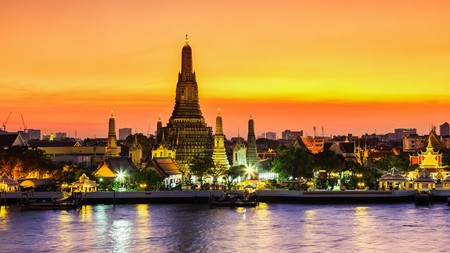 Thailand has plenty of fascinating landmarks, including traditional and modern examples of architecture, unique natural features and jaw-droppingly beautiful landscapes.

You can now travel with Culture Trip to Thailand to ensure you make the absolute most out of your trip. Carefully curated by travel experts and led by local insiders, our South Thailand and North Thailand trips showcase the must-sees-and-dos – as well as off-the-radar activities you won’t find on a typical group tour. 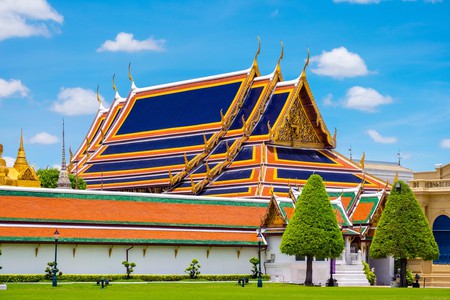 Found within the same complex, the Grand Palace and Wat Phra Kaew (also known as the Temple of the Emerald Buddha) are major tourist destinations in the Thai capital. Few people visit Bangkok without visiting the famous landmarks. The intricate details and grand architecture appeal to photography lovers and those interested in history and culture are sure to enjoy the various displays. The celebrated Emerald Buddha is one of the nation’s most revered religious statues.

Located on the Thonburi side of the river, Wat Arun is one of Bangkok’s most unique temples. Also known as the Temple of the Dawn, the riverside temple has colourful pagodas and spires that tower over the water. You can climb up the ornate structures for great views over the surroundings and appreciate the fine details up close. Mythical garuda figures surround many of the pagodas.

One of Chiang Mai’s major temples, Wat Pratat Doi Suthep has a glittering golden pagoda surrounded by beautiful pavilions and buildings. The pagoda houses a relic of the Lord Buddha. Visitors must climb more than 300 steps to reach the hill-top temple, with colourful naga statues slithering down the staircase and great views across the nearby area. The outer terrace boasts small shrines, trees, flowers and statues, while the inner terrace is where you’ll find the main tiered pagoda as well as Buddha statues in various poses. 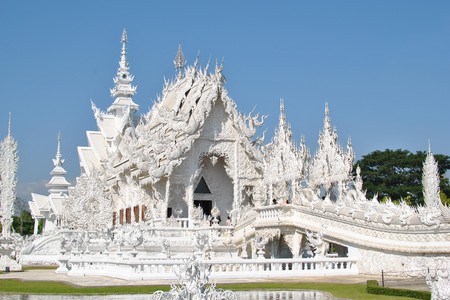 Although Wat Rong Khun is a fairly new temple, it is quickly establishing itself as one of Thailand’s must-sees. Found in Chiang Rai and also known as the White Temple, it is striking for its gleaming white designs and fairytale-like appearance. There is controversial artwork within the main temple building, reached by traversing a walkway with ghostly limbs reaching up from underneath.

Bridge Over the River Kwai

A symbol of the damage suffered by Thailand during wartime, the black metal Bridge Over the River Kwai is in Kanchanaburi province. Part of the proposed Thai-Burma Railway Line, also known as the Death Railway, it was part of Japan’s ambitious scheme to connect the neighbouring countries by railroad. Built primarily using forced labour, many people lost their lives building the railway and the bridge.

One of the tallest buildings in Bangkok, State Tower sprang into public awareness thanks to the 2011 hit movie The Hangover Part II. Some of the film was shot in the Sky Bar at the top of the tower, part of the high-class Lebua hotel. The bar’s golden dome and circular bar area set on a large open terrace are among the city’s most recognisable sites. 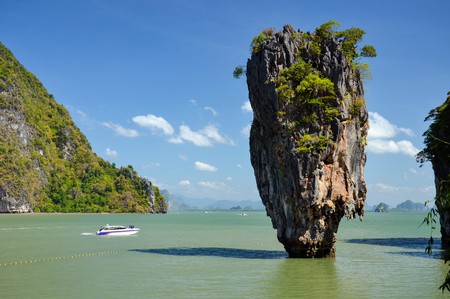 You might not know the name of Ko Ta Pu, but you will almost certainly recognise pictures of this iconic natural landmark. Located in the sublime and scenic Phang Nga Bay, the spire-like karst rises up from shimmering waters with other greenery-clad limestone rocks in the background. Located just off the coast of the small island of Khao Phing Kan, together they are commonly referred to as James Bond Island after being featured in the classic movie The Man with the Golden Gun.

One of the most famous beaches in Thailand, Maya Bay is part of the uninhabited Koh Phi Phi Leh, the smaller of Krabi’s Phi Phi islands. Made famous in the film The Beach, the stunning bay attracts numerous visitors throughout the year. Soft white sands cover the beach, long-tail boats bob on the waters and limestone karsts rise from the waters to almost enclose the bay. The wildlife-rich patch of jungle behind the bay adds further to the appeal. 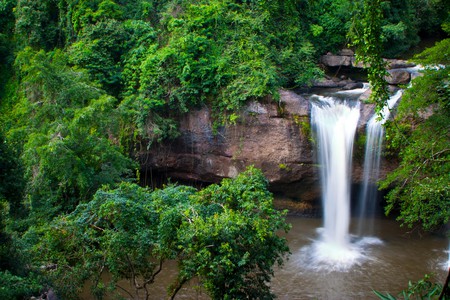 Haew Suwat Waterfall is another of Thailand’s natural features seen in The Beach. Found within Khao Yai National Park, itself one of Thailand’s most-visited national parks, the large waterfall tumbles down a cliff to reach a pool at the bottom. It is surrounded by thick jungle with lots of flora and fauna to spot.

Damnoen Saduak Floating Market is one of the most famous such markets in Thailand. Located just outside of Bangkok in Ratchaburi province, it draws scores of tourists eager to experience a different way of shopping and see how trade was traditionally conducted in the Land of Smiles. If you go early in the morning, you’ll see boats rowing to the market area from nearby waterways, laden with fruit and vegetables, cooking equipment, clothes, souvenirs and more.