Could the White Truffles in Your Next Gourmet Meal Come From Thailand? 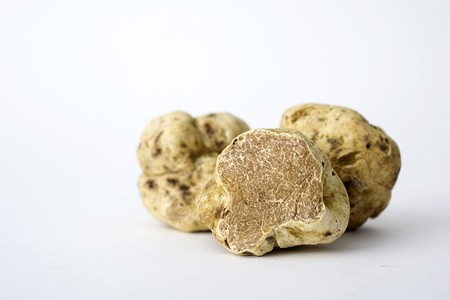 White truffles, essentially a very fancy fungus with an intoxicatingly heady aroma, are one of gourmet diners’ favorite delicacies. And what a luxurious indulgence they are: They hail almost exclusively from one small region of the world (primarily from the Piedmont region of northern Italy, particularly around the town of Alba), and are available for a brief season of only a couple of months each year. They’re foraged by hand, with the help of specially trained dogs and pigs. Their rarity and expense ensures they’re available only in the finest restaurants, where they’ll likely be shaved over pasta and similar dishes to the tune of $100 and up for just a few grams of the fungus, and in specialty food markets, where you’ll probably fork over upwards of $200 per ounce.

The tubers are famously tough to commercially cultivate. They grow where they want to grow, and until recently, that was thought to be limited to small areas of Italy, Croatia, Slovenia, and France.

But now, researchers from Chiang Mai University recently announced, they’ve found the coveted white truffles in a national park surrounding Mount Suthep, in northwestern Thailand, a region that’s generally cooler and wetter than the tropical conditions found in the rest of the country and thus more favorable for truffles. DNA tests confirmed they’re tuber magnatum, the same species as the ones more commonly found in Italy. It’s apparently the first time that truffles have been found in a tropical region.

“We confirmed that they are truffles both from their DNA and their physical look,” Jaturong Khamla, one of the researchers, told AFP following the publication of their paper.

The researchers have also identified two new species of truffle, which have been given the names tuber thailanddicum and tuber lannaense; no word yet on the pasta-topping potential for either of those.

Black truffles (a slightly less rare and less expensive type of edible truffle) cultivated in Australia have already been popping up in summertime, providing an off-season supplement to the more highly prized ones from France and rendering them a nearly year-round indulgence. Could Thailand eventually do the same for white truffles? Diners can only hope.

Okay, while it’s not likely that the white truffles commanding $100+ supplements in your already-pricy tasting menu will be coming from Thailand any time soon, it’s no longer entirely impossible.