Courtesy of PGSI 2014/Flickr
Strap on your cleats and hit the pitch, as the City of Angels has no shortage of green spaces for those who can’t get enough of this sport. Get your football fix at one of these amazing places to play in Bangkok.

School
Football | © Courtesy of Pixabay
The Arsenal Football Club was founded in 1886. The club is incredibly involved in the community, and it is for this reason that this green space is one of the best places to play this popular sport. Arsenal’s facilities and field are available for rent, with prices depending on which particular facilities you hope to use in addition to how long you hope to play. Prices start at ฿1,200 for one hour and go all the way up to ฿6,900 for two hours. These facilities are best utilized for those playing with a large group or team to split up the cost with.
More Info
Open In Google Maps
17, 1 Chuli Phon Alley, Khwaeng Phra Khanong Nuea, Khet Watthana Krung Thep Maha Nakhon, 10110, Thailand
+6627111221
View menu
Visit website
Visit Facebook page
Send an Email
Give us feedback

Soccer Pro Bangkok was founded in 2008 and its goal is to be one of the best and leading soccer field arenas in the area. It has several pitches located around the city, giving players multiple fields to choose from. From indoor turf fields to air-conditioned areas equipped with food and drinks, one of Soccer Pro Bangkok’s facilities is sure to be the one for you.

Stadium
Football | © Courtesy of Pixabay
Thephasadin Stadium is used for a number of different activities, including concerts. Its most useful purpose, however, is for an exciting soccer match. It is equipped with a stadium that can hold up to 6,380 people. It sits within the grounds of the National Stadium, which is made up of a handful of different facilities. This sports venue is equipped with a track in addition to its field, making it a great place to visit for tourists looking for a place to stretch their legs and get active.
More Info
Open In Google Maps
Khwaeng Wang Mai, Khet Pathum Wan Krung Thep Maha Nakhon, 10330, Thailand
+6622257615
View menu
Visit website
Visit Facebook page
Send an Email
Give us feedback

This is certainly not your typical game of football, but it is just as fun and exciting. The goal is the same: score more points than your opponent, and, of course, have fun doing it. What sets Bangkok Bobble Football apart, however, are the player’s uniforms (or lack thereof). Instead of the usual jersey and shorts, players instead wear a large inflatable bobble. Prices start at ฿8,000 for 10 bobbles, which is ideal for anywhere from 8-16 people. The longer visitors wish to play, the more the price increases. 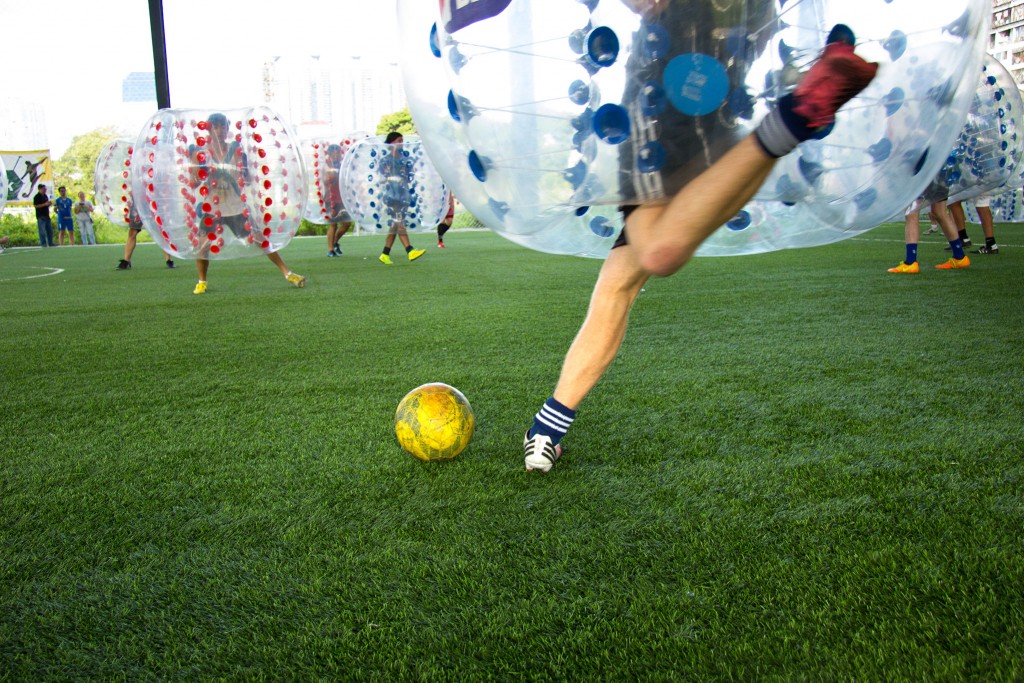 Building, Sports Center
From air-conditioned hang out rooms to three Astro turf fields, Skykick Arena is well-equipped to keep visitors entertained for hours. One of the fields is located on the second floor of the building, providing players and spectators alike a unique view of the city while enjoying a game of football. Skykick Arena is located a bit outside of the city in comparison to some of the other football fields on our list.
Looks like it's closed Hours or services may be impacted due to Covid-19
More Info
Open In Google Maps
Bang Na-Trat Frontage Road, Khwaeng Bang Na, Khet Bang Na Krung Thep Maha Nakhon, 10260, Thailand
+66834455574
View menu
Visit website
Visit Facebook page
Send an Email
Give us feedback

Beat the heat at Arena 10, one of the most luxurious football fields in the city. Bangkok’s weather can be brutal on newcomers, making the idea of strapping on your gear and storming the field for a game of football a hard one to grasp. Players do not have to worry about that at Arena 10, which is equipped with a large, overhead covering to shade those tearing up the field. It is here where locals gather to play a (sometimes) friendly game of football on this field’s modern, artificial turf. It is also equipped with luxurious locker rooms and showers, which is incredibly convenient considering Arena 10 is located off the BTS Skytrain station Thonglor, home to some of the best nightlife in town.